Home » Destinations » Mexico » Morelia » How to Experience Day of the Dead on Janitzio Island, Mexico

The Isla de Janitzio is the most significant of five islands in Lake Pátzcuaro and rises like a mountain from the calm waters of one of Mexico’s highest lakes near Pátzcuaro in the state of Michoacán.

While the island of Janitzio is best known for its night of Day of the Dead celebrations (Noche de Muertos takes place November 1 and Dia de Muertos, Day of the Dead and All Souls Day is November 2nd.), it’s worth arriving a day or two earlier to watch the preparations.

Begin your experience by browsing the sugar skulls, altar decorations and Day of the Dead artisans markets in Patzcuaro.

A short taxi ride or shuttle but away is the Muelle San Pedrito dock. This is where you take the boat to Janitzio Island. You’ll likely see congregations of brass bands, roving troubadours, mariachis and an assortment of souvenir vendors.

Check out our post on the  Ultimate Playlist of the Best Mariachi Songs to Request if you’re thinking of requesting a song.

In our trip, we purchased tickets (50 pesos or $4 USD round-trip) and boarded the ferry alongside local Purepecha people toting la flor de Cempoalxóchitl (marigolds), cases of Coca-Cola and other supplies for  Animecha Kejtzittajua or the Feast of the Souls.

The Purhepecha settled in this region of Michoacan in the 14th century, establishing the island of Janitzio as the centre of their kingdom. According to Purepecha legend, it was home to Mintzita, daughter of King Tzintzicha and her lover Itzihuapa, the crown prince of Janitzio.

Their romance was interrupted by  the arrival of the Spanish conquerors and their souls, along with those of 21 ghostly boatmen, still live in the shadowy blue lake, guarding a treasure of fantastic riches.

For us, there were no signs of spirits rising out of the water. But local fishermen did appear, arriving in  dugout boats and scooping up tiny white fish, about one third the size of sardines, in their  butterfly nets.

Known as the Butterfly fishermen, they posed for photo-ops – a new tradition as pollution in the lake has created so much algae the fish population has diminished considerably.

But there is a legend behind the Dia de Muertos ceremony of fanning the butterfly nets.

According to legend, each November 1st on the night of the Day of the Dead, the ghostly guardians  beneath the lake awake to the tolling of the church bells of Janitzio.

They emerge from the waters and, fanned by the fishermen’s butterfly nets, are coaxed up the steep stairs to the cemetery.

As Colleen and I retraced the ghostly route up the slopes of Janitzio, we passed vendors selling charales or charalitos,  tiny fish deep-fried, salted and served with salsa and lime.

Passers-by eat the fish whole to fuel them along the walk. It’s 365 steps to the top of Janitzio Island and while not steep the climb is a bit of a workout.

As we climbed upward, the 40-meter statue of José María Morelos, a hero of Mexico’s Independence loomed large at every bend.

Between the shops we could catch glimpses of church spires, cemeteries and Lake Patzcuaro.

What to Eat around Lake Patzcuaro Michoacan

At the top of the hill, we encountered restaurants with the tables already set with plates, cutlery and glassware for the feast of Dia de Muertos.
Traditional foods such as pato en chile (duck), tamales, trucha (trout), Tarascan soup and the tiny white charalitos would soon be served.

Feast of the Souls in Janitzio on Lake Patzcuaro

Although we wouldn’t be in Janitzio for the Feast of the Souls,  looking out across the pale blue lake, it was easy to imagine the souls of the gods awakening to the sound of church bells and floating on the night mist to the cemetery.

There, they would be welcomed with candles, copal incense, elaborate altars laden with offerings of candy skulls and flowers — gifts from the living to the dead– for the Feast of the Souls.

Bringing whole new meaning to the concept of company’s coming for dinner.

Location of Isla Janitzio: The island of Janitzio is located 3 kilometres north of Patzcuaro and there are many buses, taxis and shared mini-vans going there several times daily. You can catch one near Plaza Chica beside the market

Hotels: There is so much to do during Day of the Dead around Pátzcuaro, I don’t recommend staying on Janitzio Island. It’s really best to spend the day there and return to Pátzcuaro for the night.

We stayed at the Meson de San Antonio which is a historic, budget hotel near the Day of the Dead Flower Market and the Basilica. The location is ideal and while the rooms were a bit chilly, a wood-burning fireplace kept it cozy.

Rooms were very spacious and the hosts extremely helpful. They also had quite an elaborate home altar installed for Dia de los Muertos.

Check rates and availability at Meson de San Antonio in Patzcuaro on Booking.com. 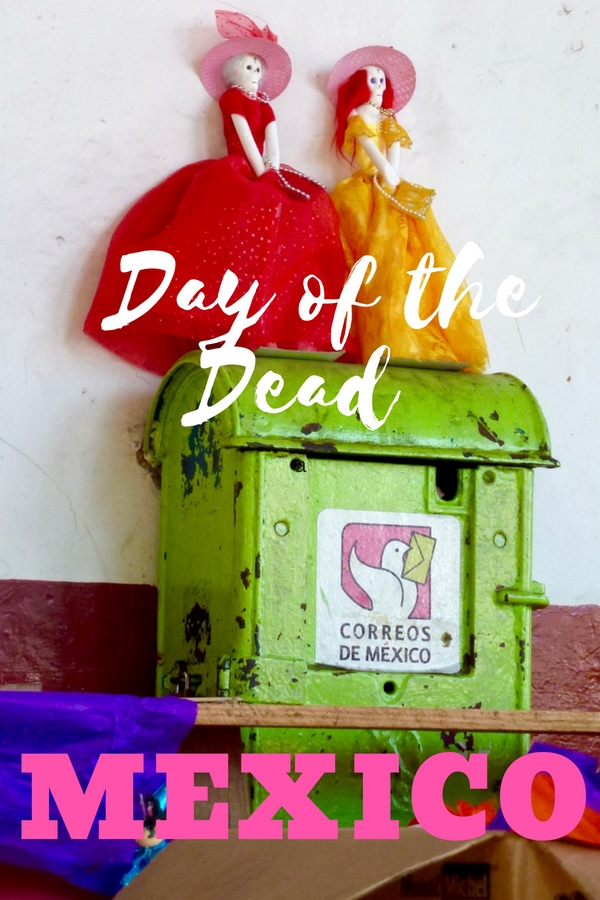 Enjoy London with Eating London Food Tours
Next Post: 7 Reasons Why You Need Travel Insurance While You Travel