Wondering where to stay near Mexico City Airport? If you have an overnight layover at Mexico City International airport, you don’t have to spend a fortune to get a hotel offering value, great customer service, safety and style.

Over the past 15 years I’ve passed through Aeropuerto Internacional Benito Juárez dozens of times while enroute to beach destinations such as Puerto Escondido, Huatulco and Cancun.

While I usually try to add a few days to hang out in the Roma Norte neighbourhood and explore Mexico City’s attractions sometimes there’s only time for one night. That means it’s time to pick an airport hotel.

So it’s wise to have your airport hotel booked in advance and know where you’re going.

Whether you’re looking for a luxury hotel inside the airport, a cheap hotel with a free shuttle to the airport or a midrange hotel with a shuttle (and an outdoor swimming pool), here are my top choices for the best hotels near Mexico City Airport.

In the superior category, the Courtyard by Marriott Mexico City Airport is my recommended choice for the best airport hotel in Mexico City.

Connected by walkway on the second level above Puerta (Door 7) in Terminal One of Benito Juárez International Airport this sleek 5-storey hotel is part of the Courtyard by Marriott collection.

This hotel is well suited for travellers looking for convenience, safety and style without leaving the airport. The hotel’s focus is on business travellers and amenities include spacious rooms, stylish lobbies, fitness centres and plush bedding.

Opened on April 1, 2012, the Courtyard Marriott Mexico City Airport launched with an unbeatable combination of competitive pricing and services.

Although prices have increased since it first opened, it’s still your best choice if you want a hotel inside or connected to the Mexico City airport.

It’s superior to the comparably priced Hilton Mexico City Airport and Camino Real Aeropuerto, both somewhat dated properties that are showing their age and can have spotty service.

If you have domestic connections,  the Courtyard by Marriott hotel is located in Terminal One so is more convenient than NH Hotel. For those with connections to other cities in Mexico, it offers easy access to VivaAerobus and Interjet check-in counters.

The hotel has 271 rooms and 17 suites. It’s also conveniently located to rapid transit if you’d like to explore the many attractions of Mexico City.

What You’ll Love at this Luxury Mexico City Airport Hotel:

How to Find the Courtyard by Marriott in Mexico City Airport

If you haven’t been to Benito Juarez Mexico City Airport Terminal One before you might not even realize there are two levels.

To access the Courtyard Marriott you need to get to Level 2 of Terminal One. There are ramps and an elevator near Puerta  7 ( Door 7). Once you’re on the second level, follow the walkway to the Marriott.

Check rates and availability at Courtyard by Marriott Mexico City Airport on Booking.com.

If you are prepared to stay outside the immediate perimeter of Mexico City Airport, you can cut your hotel bill by 30% and score a hotel that comes with plenty of bells and whistles.

I have to admit that at first glance I was rather reluctant to stay at the Fiesta Inn Aeropuerto.  Not only was it not directly connected to the airport, but its photos didn’t look very appealing.

But on a recent trip, I was pleasantly surprised. The Fiesta Inn Aeropuerto is now one of my favourite places to stay at Mexico City Airport.

It’s the best airport hotel for families at Mexico City Airport thanks to the swimming pool and spacious rooms.

If you’re travelling solo, on business or travelling with a family, it’s definitely worth considering. It’s also a good  option if you want to go into Mexico City for dinner and drinks in the Roma Norte neighbourhood as it offers easy access for Uber or Didi car service.

Or check prices and availability of a private Mexico Airport Transfer to Mexico City on Viator.com.

For budget travellers, the nearby Hotel Grand Prix, is a very economical option and is  also available via a free airport shuttle.

It is five minutes further away from the airport than the Fiesta Inn but on my most recent visits, the service was not to the same standard.

Dining options are also limited but there are several street food stands and grocery stores within easy walking distance.

Read our full and very detailed review of the Grand Prix: A Budget Hotel Option near Mexico City Airport for more information.

Note that If you’ve got a long layover but don’t need to overnight, it’s worth looking into the Mexico City pod hotel which allows you to sleep inside a capsule for a much cheaper cost than staying in any of these hotels.

The world’s tiniest hotel experience — capsules — have just arrived at Mexico City International Airport! Already popular in Japan and New York City, the concept of sleeping capsules are aimed at travellers on the go.

Located in Terminal 1, the  izZzleep hotel pod capsules are designed for travellers with long connections, people on a budget or those looking for a quick refresh.

So if you’re looking for a place to chill out for a few hours, to overnight  or even just have a quick shower, one of the new izZzleep capsules might be just what you need.

Cost for the izZzleep Hotel at Mexico City International Airport?

It’s worth researching the cost of your stay at the izZzleep pod hotel as in some cases, it might be cheaper to book a budget airport hotel. It’s often possible to find a nice budget hotel for under $65 USD which can be a better option if there are two or more travellers in your party.

How Far is Mexico City Airport from the City Centre?

Mexico City Benito Juarez airport is 11 kilometres away from the city centre. It’s possible to take the Metro by walking down the stairs in Terminal 1 and walking to the Terminal Aérea station. It’s on Line 5, running from Pantitlán to Politécnico.

Is Staying at an Airport Hotel Worth it?

Staying at an airport hotel is well worth it if you’re arriving late at night, have a busy travel schedule or are tired from a long journey. They can also be the safest option if you don’t speak the language of the country or are an inexperienced traveller.

What Hotel is Closest to Mexico City Airport?

While this post was originally published in 2015, it was updated in 2023 with new details, photos and information after a hotel inspection. 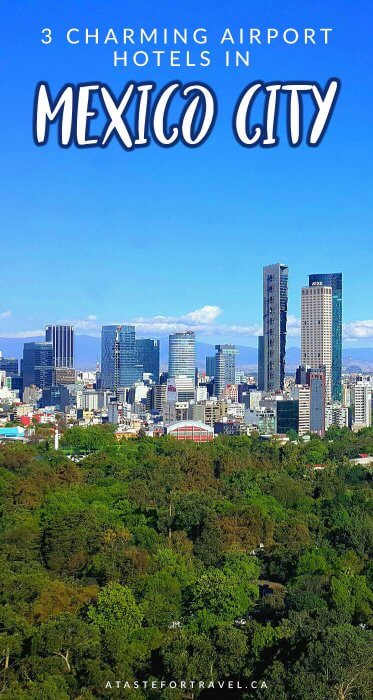