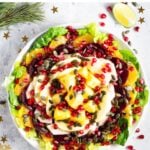 Although most popular as part of a traditional Christmas Eve dinner in Mexico, this healthy salad will add festive flair to your holiday table at any time. It’s also the perfect vegetarian, vegan and gluten-free side.

What I like most about this traditional salad of beets, pineapple, pomegranates and oranges is that it’s refreshingly different than anything else you’ll eat (such as tamales) during Navidad in Mexico or Guatemala.

It’s also incredibly easy to make, low in fat and packed with vitamins and minerals.

And during the winter months when the days are short and darkness blankets the northern stretches of our vast continent, I’m grateful for a splash of colour.

Ensalada de Nochebuena is guaranteed to lift your spirits!

Pomegranate Season Coincides with the Christmas Season and New Years

Another reason to make Ensalada de Nochebuena is that December also happens to be pomegranate season. Pomegranate season typically runs from the end of October through to early February.

This recipe is a great way to enjoy the freshness and availability of this jewel-coloured seasonal fruit.

Packed with Vitamin C, fibre and antioxidants, pomegranates have a burst-in-your-mouth flavour that’s as invigorating as an early morning walk on a white sand beach.

Fun Fact: Did you know that the tiny red jewels of nectar holding the seeds inside a pomegranate are actually called arils? These pockets of juice are also packed with fiber.

So eat them up and impress your friends by using “aril” in your next game of Scrabble!

Other key ingredients in Ensalada de Nochebuena Mexicana include pepitas (raw pumpkin seeds that will be toasted and sprinkled on top), fresh oranges, firm cooked beets, apple and pineapple.

In Mexico, it’s also traditional to include jicama, the edible root that’s also known as the Mexican turnip or potato.

However, if you can’t find jicama and are tempted to substitute a turnip or potato for jicama, don’t do it!

A jicama isn’t as starchy as potato and has a mild flavour almost like an apple.

How to Create Your Christmas Eve Salad

Because this is one of the most popular Christmas foods in Mexico during Navidad, there are as many variations of Ensalada de Nochebuena as there are cooks.

But I prefer to make mine a composed salad so that the colours from the beets and the pomegranates don’t bleed into the other ingredients.

Once you’ve prepared and composed the fruit for your salad, whip up the salad dressing in a separate bowl.

A popular variation of Ensalada de Nochebuena features jamaica (from the dried hibiscus flower). The tart liquid is added to the chopped ingredients for a different, much juicier fruit side dish.

For this recipe for a composed salad, just pour the salad dressing over the composed fruit and vegetables. You don’t need to stir it.

Squeeze fresh lime juice over the salad to add a burst of freshness and to help prevent the apples from discolouring. Sprinkle with pomegranate seeds and pepitoria.

If you have any leftovers, you can simply mix the fruit and vegetables together and you get to enjoy both versions — composed and mixed!

How to Serve This Easy Ensalada de Nochebuena Recipe for Navidad

If you’ve tried this recipe for Ensalada de Nochebuena, please rate the recipe and let us know how the dish turned out in the comments below. For more holiday recipes, check out these festive ideas: