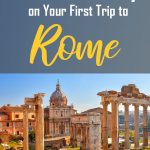 Looking for a hotel in the Termini neighbourhood of Rome? Smart decision!

The Termini area of Rome is not only a terrific base for a vacation in Rome, it’s also an emerging food destination and one of the city’s most underpriced neighbourhoods.

I’ve stayed in the Termini neighbourhood many times over the past several years. Not only is it convenient to the Termini Station which is handy if you’re headed to Puglia or Florence but it’s also very walkable.

Located in the northeast part of the city, Termini is close to many major Rome attractions both by foot and public transportation.

So, if you’re looking for the best neighbourhood to stay in Rome, skipping the Termini area completely would be a mistake!

Is the Termini Area in Rome Safe?

If a person relied only on the advice within major guidebooks,  they’d avoid Rome’s Termini neighbourhood like the plague of Cyprian.

According to Frommer’s travel guide, the area surrounding Stazione Termini is “seedy, filled with gas fumes from cars and buses, plus a fair share of weirdos.”  I think their information is rather out of date.

Perhaps I have a soft spot for offbeat ‘hoods (like my neighbourhood in Toronto), but after staying for several days in the Termini neighbourhood many times in recent years, I think it’s one of the best places to stay in Rome!

It’s especially good if you’re looking for convenience, local flavour or on a budget.

You might also be wondering is Roma Termini safe at night? I stayed solo and felt quite safe in the early evenings. But much as in any major city in the world, you need to watch for pickpockets in Italy’s capital.

They’re impossible to spot in advance, so prepare yourself by wearing a money belt and keep valuables such as cameras close to you at all times.

Inside Termini Station itself, at major attractions in Rome and the surrounding streets you’ll also run into common scams such as people offering “free” friendship bracelets, flowers, photos of you or rings. Don’t accept anything from strangers. Nothing is free!

Insider tip: In my experience, the area around the Colosseum begins to gets dodgy in the early evening. It can get gritty around Termini Station late at night. So take an organized tour if you want to go sightseeing in Rome at night.

Another safety tip — and one that applies to every neighbourhood in Rome — is to take only official taxis.  Ask your hotel to call a taxi or go to a taxi stand rather than hail one on the street.

I also recommend the Prati neighbourhood in Rome. While it’s more expensive than Termini, it’s possible to save money by staying in a convent hotel.

For more things not to miss in Rome, read 3 Mistakes You Don’t Want to Make in Rome.

Here’s what I discovered about choosing a hotel near Rome’s Stazione Centrale Roma Termini and why I think you should check the Termini neighbourhood out.

1. Best Hotel with a View in Rome – Bettoja Hotel Mediterraneo

The Termini-Esquilino neighborhood wraps around Esquiline Hill, the highest of Rome’s Seven Hills. It offers magnificent views of Rome’s skyline from many vantage points.

I stayed at the Bettoja Mediterraneo Hotel, an Art Deco hotel designed by Architect Mario Loreti in 1936. The newly renovated rooms are spacious (the largest hotel room I’ve ever stayed in while in Rome), spotlessly clean and beautifully decorated.

The marble bathroom comes equipped with a towel warmer, a bidet and large soaker tub, perfect for relaxing in after taking a walking tour of Rome.

Family-owned for five generations, the Bettoja celebrated its 80th anniversary in 2016, so it  has a rich history.

Food fans will be especially interested in their ever-evolving Rome Experiences collection of activities. Take part in a 1-hour Pizza Making Class or sign up for a Chef in a Day package featuring a private cooking class and full 5-course Italian dinner with Chef Federico Alessandri in his home.

It has one of the best rooftop views in Rome!

It’s an especially handy hotel to stay if you’re enroute to the beaches of Puglia as the Rome-Brindisi train leaves from Termini Station.

It’s also the train station you’ll arrive at if you’re on a classic two week itinerary of Europe by train.

If you want to save even more money the Bettoja Hotel Atlantico (a three-star hotel also part of the Bettoja collection) is connected to Hotel Mediterraneo and shares the same rooftop breakfast patio.

Check rates and availability of Bettoja Hotel Mediterraneo on Booking.com.

There’s plenty to see around the Termini neighbourhood. I like to walk, so found it a very easy walking distance to Palazzo Barberini as well as the Colosseum.

Other things to do in the Termini neighbourhood include visiting major Rome landmarks such as the Colosseum and Roman Forum, the National Museum of Classical Art, the Basilica of Santa Maria Maggiore (founded in 420 AD) and even the Trevi Fountain.

The neighbourhood also has its own unique attractions including a special cat sanctuary at the Piazza Vittorio Emanuelle II.

Rome is a haven for cats and visitors are also welcome to visit other famous ones such as the Largo di Torre Argentina cat sanctuary in Rome.

It’s also possible to walk from Termini to the Spanish Steps via Piazza Navona, albeit well-fuelled by pasta, gelato and spring artichokes.

3. Termini is an Emerging Food Destination

The neighbourhood is also close to the bohemian streets of Monti, one of central Rome’s oldest residential neighbourhoods and a great spot for street food, cucina povera and al fresco bars.

It’s also a 5 minute walk to the new Mercato Centrale Rome market, a collection of artisanal eateries under one roof.

You’re going to want to try Spaghetti alla Carbonara and an Aperol or Campari cocktail when in Rome so Termini is a great neighbourhood to try it in.

One of the best restaurants close to Termini Station is Trattoria Il Gallo Nero, located on Via Principe Amedeo just off Via Cavour.

It offers a quiet outdoor terrace, attentive service and an extensive menu (don’t miss the Insalata Gallonero) with reasonable prices.

4. Termini is a Budget Neighbourhood in Rome

I did a quick comparison of prices and found that a hotel in Termini costs 30-40% less than an equivalent hotel near the Spanish Steps or Piazza Navona.

It’s even possible to find a comfortable budget hotel — such as the Flower Garden Hotel — for less than $50 USD a night.

Check rates and availability at the Flower Garden Hotel on Booking.com.

You’ll also also get more for your money in terms of inclusions such as breakfast, WiFi, view and room size in Termini.

Due to repairs being done at my original hotel room at Bettoja Hotel Mediterraneo, I got lucky and was upgraded to a terrace suite. I doubt there is a room with a better room for the price in Rome.

The rooftop bar has such spectacular views, it’s considered one of the top places to go in the evening in Rome.

It would be perfect for honeymooners or anyone looking to celebrate a special occasion. Check out this terrace room:

Breakfast at this hotel was also one of the best breakfasts I enjoyed in Rome. Not only was the view fantastic but the same breakfast is enjoyed if you’re staying at Hotel Atlantico, the lowest price of the three hotels in the Bettoja Collection.

A continental buffet-style breakfast is generally included at most hotels. While tipping in Rome is not required at buffet restaurants, a tip of around 10% is appreciated for good service.

I also found costs to be much lower here than they were in other neighbourhoods such as the Spanish Steps and Piazza Navona.

For example, a birra all spina ( beer on tap) was generally around 5 Euros and services such as hair salons were half the price of elsewhere.

If you’re looking for tips on cutting costs and budget tips on travelling in Italy, check out this itinerary for 2 Weeks in Italy.

Tip: For a blow-out or hairstyling while you’re in the Termini and Esquilino neighbourhood, I recommend the hair salon at 17 Via Filippo Turati. It’s a busy, bustling spot but the stylists are fast and you’ll get in within minutes. Cost for wash, blow-dry and style = just $20 Euros plus tip.

When I wanted to go to the Trastavere neighborhood for my Twilight Trastavere  food walking tour with Eating Europe, I  hopped on the H-line bus in front of Termini Station. For 1.50 Euros, the Dei Capasso bus (Platform H) took me to Ponte Cestio in about 15 minutes.

Learn more about getting to Termini Station and around the city in this Rome Travel Guide.

Tip: Buy your ticket in advance from the bar or kiosk across the street. The Line B of the Metro also passes through this neighborhood so it’s easy to get to the Testaccio neighbourhood if you’re interested in exploring this mecca for foodies. The Cavour and Termini Metro stops are handy to all of the Bettoja hotels.

6. Best Place to Stay in Rome if You Want to Avoid Tourists

You won’t see statues at every turn in the Termini neighborhood, but it’s not completely devoid of appeal. There are lots of street cafes, bars, leafy parks and of course, the magnificent Santa Maria Maggiore church to be enjoyed.

And best of all there were no crowds of tourists. I found it completely safe to walk around at night. I only wish I’d spent more time in the neighbourhood. But I’m already planning a return visit.

Subscribe to the A Taste for Travel blog to hear more about Rome.  You’ll also receive access to a 15% discount code you can use on Eating Italy Food Tours, half-day excursions ideal for exploring the Testaccio and Trastevere neighbourhoods. 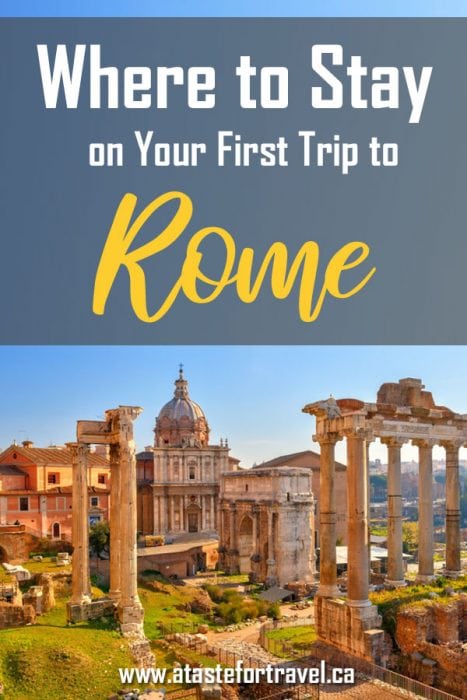 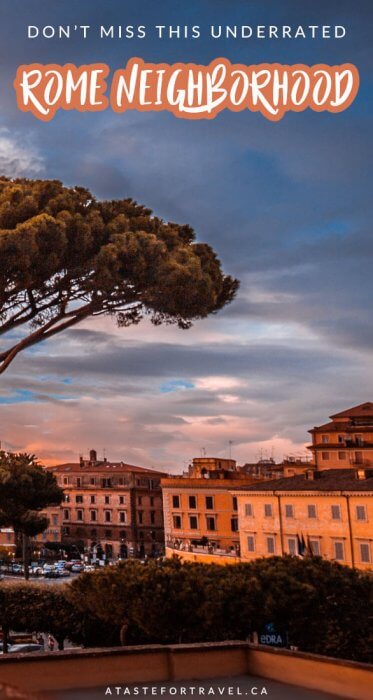 3 Mistakes You Don’t Want to Make in Rome
Next Post: One Day at Buena Vista Lodge in Rincon de La Vieja National Park