Grilled Steak in Beer Marinade – Just in time for summer patio time! This balsamic vinegar and beer steak marinade is perfect for tenderizing and adding flavour to your steaks before grilling them on the barbecue, in a cast iron pan or on an indoor grill.

Serve it with a refreshing salsa fresca, a fresh tomato salsa with a bit of spicy heat.

When You Should Marinate Steak

Marinating beef in a marinade of slightly acid ingredients both tenderizes and adds flavour to meat. This can be really handy for a cut of meat that’s lean (such as sirloin) or a steak that’s tough, such as flank steak.

You can also use beer marinades to add a boost of flavour to more tender cuts of meat such as strip loin, rib-eye and T-Bone. You can try different types of beers to add new opportunities for flavour.

Marinades also make a steak turn out juicy every time

The Best Beer to Use for Steak Marinade

For this beer steak marinade I used a red lager from The Old Flame Brewing Co. in Port Perry, Ontario because the caramel red malt of this craft Vienna lager adds a delicious sweetness to the marinade.

But, you could use any one of your favourite strong ale or lager beers.

When choosing a beer for your beef marinade you want to look for a beer that has a medium amount of hops flavour, the ingredient that adds spice to beer. The alpha acids from hops also add bitterness to beer.

This bitterness helps balance the sweetness of the malt and the various types of hops add flavour notes ranging from citrusy to fruity to beer.

If you’re trying to decide on a beer to use for a marinade it’s worth considering its bitterness rating. The bitterness of a beer is measured in International Bitterness Units  (IBUs), on a scale of between 5 and 120.

Generally, the higher the IBUs, the more bitter the beer.

The best beer for marinating steak has a medium amount of hoppiness so it doesn’t overwhelm the natural flavour of the beef with its bitterness.

For example, the flavour of a bold India Pale Ale can be too dominating, so it’s best to enjoy a hoppy beer for sipping rather than cooking.

Another option when choosing a beer for a marinade is to go with a dry stout. The coffee-like taste of roasted barley adds character to the beer and will infuse the marinade with a delicious depth of taste.

How to Make Grilled Steaks – Time and Temperature

You want to cook steaks on a very hot grill so you get nice char marks on the outside. Whether you use an indoor grill or outdoor barbecue (gas or coal) you want to make sure it’s extra hot before starting.

Top Tip: If grilling your steaks indoors use a heavy cast iron skillet or griddle pan for a nice char on the steaks.

Timing is important when grilling steaks so if you are unsure on when the steak is done use a meat thermometer while cooking. One of my favourites is the Deiss PRO Digital Meat Thermometer  as it’s very easy to use and doesn’t take up much space.

Here’s a guide for how long to grill a 1.5-inch thick steak.

Another option if you have a lean cut of beef such as flank or skirt steak is to make Flank Steak in an Instant Pot. It will take around 30 minutes, but the pressure cooking results in an especially tender steak.

It adds a burst of summery freshness to grilled meats and is especially delicious if you have fresh tomatoes from the garden.

The key to making salsa fresca is to use tomatoes that aren’t too ripe. If the tomatoes are soft or the skins are wrinkly, then you’ll end up with a mushy, watery salsa.

White onions are also the best choice of onion to use as they aren’t as bitter as yellow onions.

Much like our recipes for Mexican salsa verde(green tomatillo sauce),  chirmol (Guatemalan charred tomato salsa) and Freezer Tomatillo and Tomato Salsa, this salsa fresca is great with taco chips, on scrambled eggs or as a side to almost anything.

When it comes to side dishes for grilled steak, I love to serve Caribbean Coconut and Red Bean Rice or Guatemalan Black Beans and Rice. They’re easy, economical dishes that double as vegetarian and vegan entrees.

Or, for a light and creamy side, try our recipe for Jicama Apple Slaw.

You Might Also Enjoy these Recipe Ideas for Summer Grilling and Beef:

If you enjoyed this beer marinade for beef, check out these recipes filled with the flavours of summer:

Subscribe for free to the A Taste for Travel newsletter and you’ll receive news, recipes and more direct to your in-box 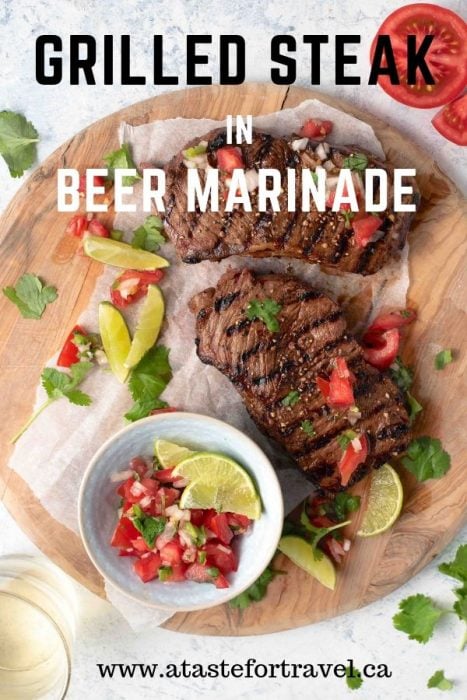