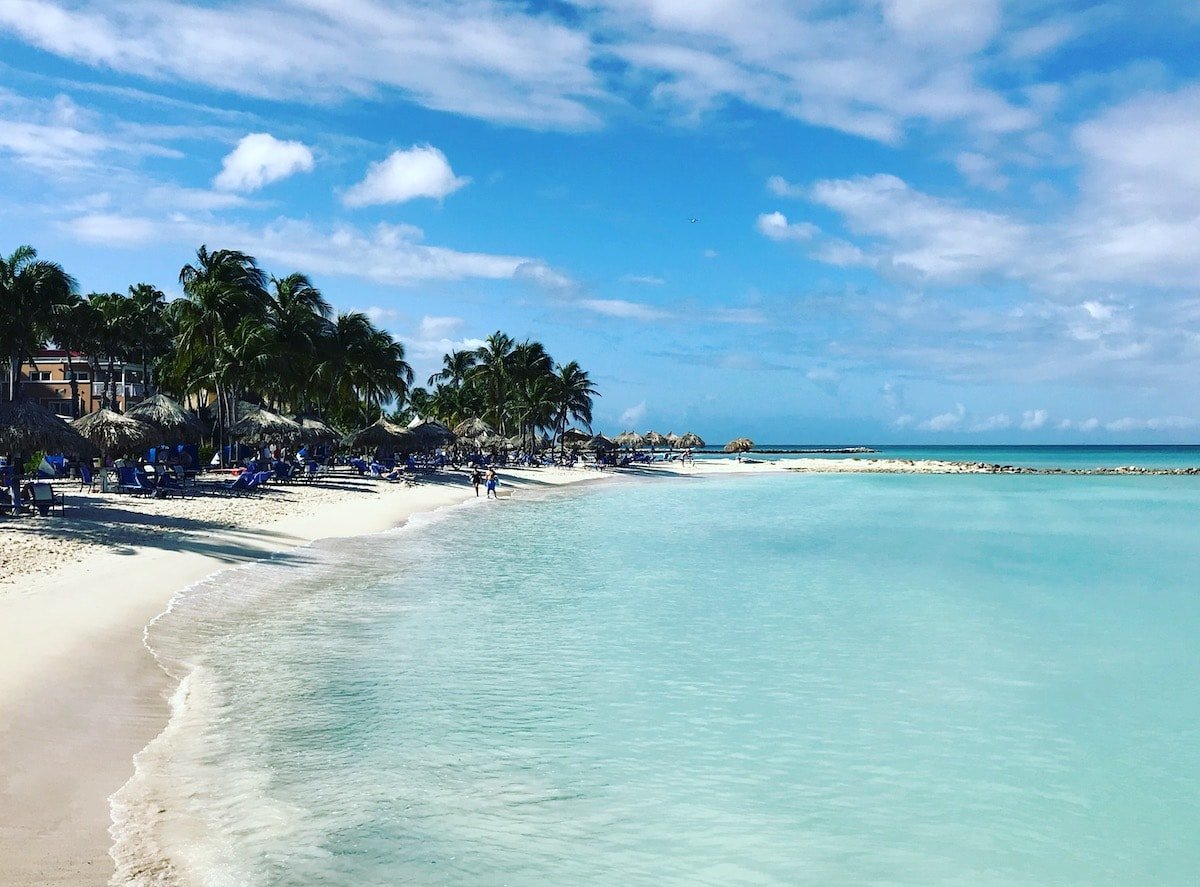 Aruba is the “A” of the trio of the Dutch Caribbean islands called the ABCs (Aruba, Bonaire, Curacao) just off the coast of Venezuela. Bathed by cooling trade winds and located outside the hurricane belt, it’s perfect to visit year-round.

It also offers some of the best beaches on the planet – all of which are open to the public. Though it’s a tiny, flat, arid rock, 75 square miles in all, its sophisticated tourism offerings has it playing host to over a million visitors per year seeking to enjoy the kind of idyllic holiday experience that has it dubbed “One Happy Island”.

And it obviously delivers. In fact, one might say that Aruba is addictive because it has the highest repeat visitor ratio in the entire Caribbean! You can be sure once you visit once, you’ll most likely return.

Aruba’s allure is a magical blend of modern infrastructure and unspoiled nature (20% of the island is a protected national park) and a wide range of hotels, resorts, and timeshare options, as well as boutique getaways.

Its waters are clear aqua and warm, ideal for watersports of every ilk. It’s especially favoured for windsurfing and kite boarding due to its constant trade winds and snorkeling sails are very popular.  Aruba is also known as the wreck diving capital of the Caribbean.

With a gumbo of over 90 nationalities all melting into many culinary influences including Spanish, Portuguese, African, Indonesian, Dutch, and South American, options for the foodie traveller are diverse, exciting, and ever-changing.

The island has over 300 restaurants and countless cafés and “snacks” (food truck type hole-in-the wall spots and kiosks) that serve up excellent local Aruban food at a great prices. Fresh fish and seafood are always on the menu, and standard North American fare is available everywhere, especially at the big hotels.

But Aruba is also surprisingly vegan-friendly, in fact one might say it has some of the most gourmet forward plant-based menus in the Caribbean. And the island has many excellent chef’s table experiences and modern fusion spots as well.

Weather-wise there is no bad time to visit. The temperature is a consistent 82% with refreshing trade winds at 20 knots all year round.

Aruba typically receives less than 20 inches of rainfall per year, mostly in November and December. But even then, storms come in fast spurts and clear up quickly.

High season is from November to the end of April, that’s when you’ll have the most crowds, and the highest prices. Low season offers less people and better hotel rates, but less direct air choices.

Aruba is considered one of the more expensive islands in the Caribbean chain, and it can be if you opt to stay at big box brand hotels or upscale all-inclusive resorts found in the main hospitality areas of Oranjestad, Eagle Beach, and Palm Beach.

But there are ways to do it well and cheaply, too, if you stay at smaller, less full-service hotels and small resorts that aren’t located right on a beach. That way you can save your money for outings.

Many have full kitchens so you can self-cater if desired and there is easy access to large well-stocked and reasonably priced grocery stores. Aruba also has Airbnb. There’s also a wealth of free things to do in Aruba.

You won’t need a rental car save for a few days to explore the wilder side of the island if you are staying at the main tourist areas.

Aruba is easy to get around by public bus or taxis which are not metered but zoned and regulated by the government. So, you always know what you’ll pay in advance.

Eat: Typical three-course dinner for two excluding drinks or wine is approx. $80 US

Stay: Cost per night for a hotel or resort overnight double occupancy depends on the season and where you are staying but, low season is approx. $250-300 high season $350-400

Transportation: The public bus system starts downtown Oranjestad and stops at every main resort and beach on the tourist side. Downtown Oranjestad is very walkable in a compact grid, but they also offer free trolleys.

Eagle Beach and Palm Beach regions are very walkable, and Aruba is very flat, with lots of boardwalk and paved paths for cycling.

Having a rental car for a day or so is a good idea if you want to explore the rest of the island like San Nicolas, Savaneta and Arikok Park which covers 20% of the island as a protected preserve.

Looking for the freshest seafood in Aruba? Zeerovers Aruba, in the town of Savaneta–formerly the country’s capital–is more seafood s…

END_OF_DOCUMENT_TOKEN_TO_BE_REPLACED

One of the top places to eat in Aruba if you’re looking for Dutch snacks is Cafe 080. While Kroket, Bitterballen and Frikandel might sound like …

END_OF_DOCUMENT_TOKEN_TO_BE_REPLACED

This super-easy siboyo tempera recipe is sure to become your summer go-to when looking for a delicious accompaniment for grilled chicken, steak or sea…

END_OF_DOCUMENT_TOKEN_TO_BE_REPLACED

.One of the most iconic images of Aruba is of Flamingo Beach, where graceful pink birds tiptoe across powder white sand set against turquoise blue wat…