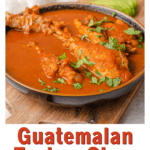 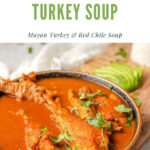 This traditional Guatemalan kak’ik soup features dark turkey meat in a delicious, lightly-spiced red broth. One of the most famous Mayan dishes in Guatemala, it’s perfect for a hearty meal when it’s chilly outside.

For a global twist during the holiday season, enjoy kak’ik as a spicy, savoury alternative to plain roast turkey.

Its characteristic red colour comes from the dusky annatto seeds of the achiote tree.

This traditional Q’eqchi Mayan dish, which dates to pre-Hispanic times, is one of the most famous Guatemalan foods. A cross between a soup and a stew, it’s so special it was even deemed a cultural icon by Guatemala’s Ministry of Culture and Sport!

Although similar to other famous Guatemalan dishes such as pulique and pepian de pollo (chicken stew), kakik is reserved for special occasions because turkey meat is much more expensive than chicken or gallina (hen).

The dish originates in the Alta Verapaz region of the country. Its capital city of Cobán, founded by Dominican friars in 1538, serves as the social and commercial hub for surrounding Q’eqchi Mayan community.

Set at an altitude of 4,000 feet in mist-shrouded rainforest, Cobán is often chilly. So the spiciness of the steaming hot caldo (soup) and richness of the dark turkey meat is especially welcome.

A popular stop for travellers enroute to Coban on CA14 highway, the restaurant’s menu features kakik along with other traditional Guatemalan foods.

Because it’s usually prepared with chunto criollo, a wild turkey that’s more flavourful and leaner than the plump ones available in supermarkets in North America, menus sometimes list it as chunto rather than pavo in Spanish.

If you’re headed to Lanquin or Semuc Champey another good stop for kakik before Cobán is San Rafael Restaurant.

What is the Meaning of Kak-ik?

The meaning of kakik in English is “red and spicy” but it has a deeper meaning.

In ancient Mayan times, turkeys were highly prized as symbols of wealth and abundance. The red colour of this dish evokes the blood spilled in sacrificial rituals and is symbolic of rebirth.

While in Coban, I saw several ritualistic sacrifices of chickens on the grounds of El Calvario Church.

And although some original recipes for kakik call for turkey blood to be incorporated into the broth, it’s not part of my recipe for kakik. So, don’t worry that you’ll need to go looking for some!

While it’s an easy to make recipe, one of the key ingredients to an authentic Guatemalan kak-ik is the small, round, dry-smoked chile Cobánero or chile de Cobán.

Due to the wood drying process a Cobánero chile has an intense, smoky flavour that provides an incredible depth of flavour to the dish.

While it’s most often seen in kak’k, the Cobanero chile is one of my favourite chiles. It’s so versatile, I use it as an everyday chile much like red pepper flakes!

It’s available throughout Guatemala in dried pods, powder and crushed forms as well as online via Amazon. If you can’t find it,  the best substitute for chile cobánero is chipotle pepper in crushed or powdered form.

How to Prepare Kak-ik de Pavo

1. Cut turkey into serving size pieces. In Guatemala, the recipe is almost always made with turkey drumsticks. Dark meat provides a wonderful rich, flavour but you can substitute white meat. Or, if you purchase a large turkey, roast only part of it and reserve the remainder for this recipe.

2. Add enough stock to cover the turkey, the garlic, cilantro and ½ teaspoon salt. Bring to a boil and simmer for 45 minutes until tender. Remove and reserve the garlic and cilantro. 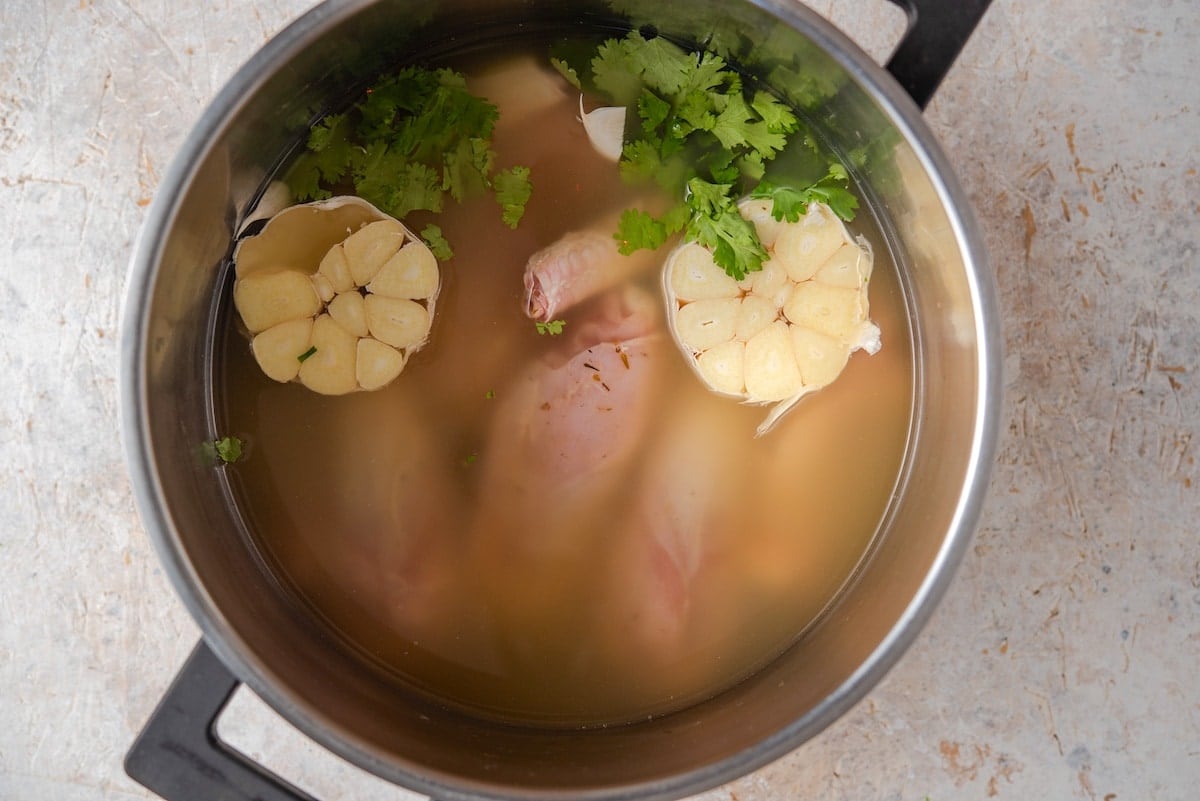 3. Meanwhile, char the tomato, tomatillos (husks removed), onion and sweet pepper. Remove and set aside. In Guatemala, pan roasting is most often done in a comal (a clay or metal griddle) but a dry skillet is a good substitute.

Pan charring vegetables for kakik follows the same technique used to make many other famous Guatemalan foods. The basis of these dishes is a recado, a pureed sauce in which the meat is served. Although charring ingredients might seem time-consuming, don’t skip this step! This traditional cooking technique is integral to achieving the delicious depth of flavour and aroma typical of this and other authentic Guatemalan foods.

4.  Char the dried chile pasa and chile guaque in the same pan until fragrant but not burned. Remove the seeds and stems. Soak the roasted chiles in ½ cup warm broth until softened.

You might be surprised to see the whole onion – peel and all – being used in this recipe. Using fruit or vegetable peelings while cooking is very typical in Guatemala. In addition to reducing food waste, root to step cooking can enhance the flavour of a dish.

I’d originally had my doubts, but now I’m a convert to cooking with peels. Just don’t ever eat the husk of a tomatillo as they’re poisonous!

When it comes to onion skins, they also deepen the colour of the sauce. According to the Farmers’ Almanac, they also provide vitamins A, C, E, and numerous antioxidants. Use organic veggies and give it a try!

5. Trim the pan-roasted vegetables of stems and combine with soaked chile pasa and chile guaque in a food processor. Add one cup of turkey stock, the reserved cilantro and 1/2 of the reserved garlic. Discard the rest of the garlic unless you’re a fan of loads of garlicky goodness. If you’re a garlic lover, toss them all in.

6. Add the puree to turkey broth and simmer until the soup is thickened to almost a stew. Add salt and pepper to taste.

7. Sprinkle with chopped mint and/or cilantro.

If you make this recipe, please rate it and tag us on Pinterest @atastefortravel and #atastefortravel. I’d love to see your food photos! 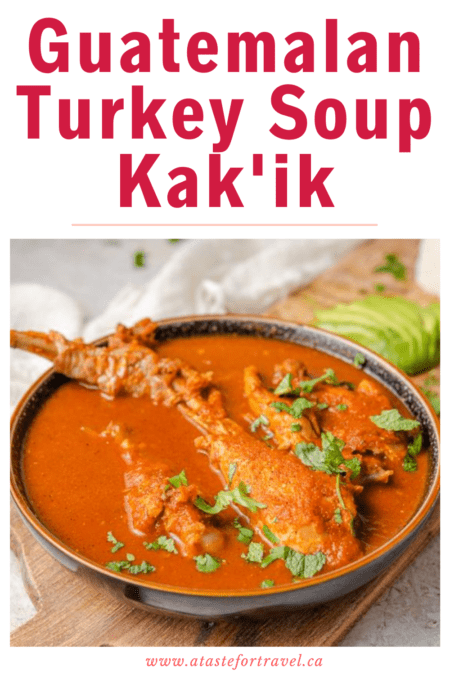