Aromatic and packed with flavour, this Mayan-inspired stew is perfect for parties and surprisingly easy to make!

With its roots in Spanish, indigenous and Garifuna cultures, Guatemalan food has a rich and fascinating heritage. Indigenous Mayan stews are one of the backbones of Guatemalan cuisine.

You’ll find the following famous dishes served in traditional restaurants throughout the country:

If you could pick just one of the country’s delicious dishes to sample, pepián is the absolute best Guatemalan food to try!

Depending on the region, it’s the favourite dish for family celebrations and Guatemalan holidays. It’s also popular at cooking classes such as La Tortilla Cooking School in Antigua.

While every version of pepián is slightly different, this pepián de pollo recipe most closely follows the methods I learned from my husband’s cousin Thelma de Valdez who runs a catering company in Guatemala City.

Thelma’s version is very similar to the one taught at La Tortilla Cooking School in Antigua. But, it has a few important variations that I think make a difference in the depth of flavour and smooth texture of this delicious stew.

History of Pepián and Pronunciation

What does pepián mean in English? The name of this traditional Mayan dish doesn’t translate perfectly into English. But pepián likely draws its name from the word pepitoria, an essential ingredient in this dish and in Mayan cuisine overall.

Pepitoria is made of toasted pepita (squash seeds) and sesame seeds ground into a fine powder. The pepitoria both thickens the sauce, creates a smooth texture and adds a deliciously nut-like flavour to the recado (sauce).

While pepián is made primarily of tomatoes, chiles, onions and spices  the secret to pepián is the nutty flavour of the pan-roasted sesame and pumpkin seeds in the sauce. It’s pure magic!

Its history dates to pre-colonial times when the Maya cultivated primary crops such as maize, beans, squash, chiles, achiote and tomatoes as the basis of their cuisine.

This version is said to hail from Huehuetenango, the ancestral home of the Mam Maya indigenous peoples, in western Guatemala.

What is the Difference between Pipian and Pepián?

While red pepián sauce is similar to a Mexican mole (where it’s known as pipian or pipian rojo), there are important differences.  An authentic Guatemalan pepián rojo features sesame seeds and pumpkin seeds but not necessarily peanuts.

Although red is the most popular colour for Guatemalan pepián, black and yellow variations are also popular. This mole Guatemalteco can feature chicken, pork or beef.

The ultimate comfort food, this Guatemalan recipe is rustic in the simplicity of its ingredients. But the mix of flavours makes it amazing! It’s sure to be a  favourite with friends and family.

Scroll down to the recipe card for quantities of ingredients.

How to Make Guatemalan Pepián de Pollo – Step by Step

The technique for the pepián of Guatemala is the same in all variations. The basis of the dish is a recado, which is the sauce in which the meat is served.  It’s quite simple to make as there’s no fussing with deep frying or browning!

However, a slightly time-consuming part of this recipe is the charring of the ingredients. This traditional cooking technique is integral to achieving the delicious depth of flavour and aroma common in this and many other Guatemalan dishes.

While pan roasting is most often done in a comal (a clay or metal griddle) a dry skillet is a good substitute.

1. Begin by cutting the chicken into  serving-sized pieces and simmering it in 5 cups of water with salt for 30 minutes. Skim off and discard any grey scum that may form while cooking. Drain and reserve the broth for the sauce. 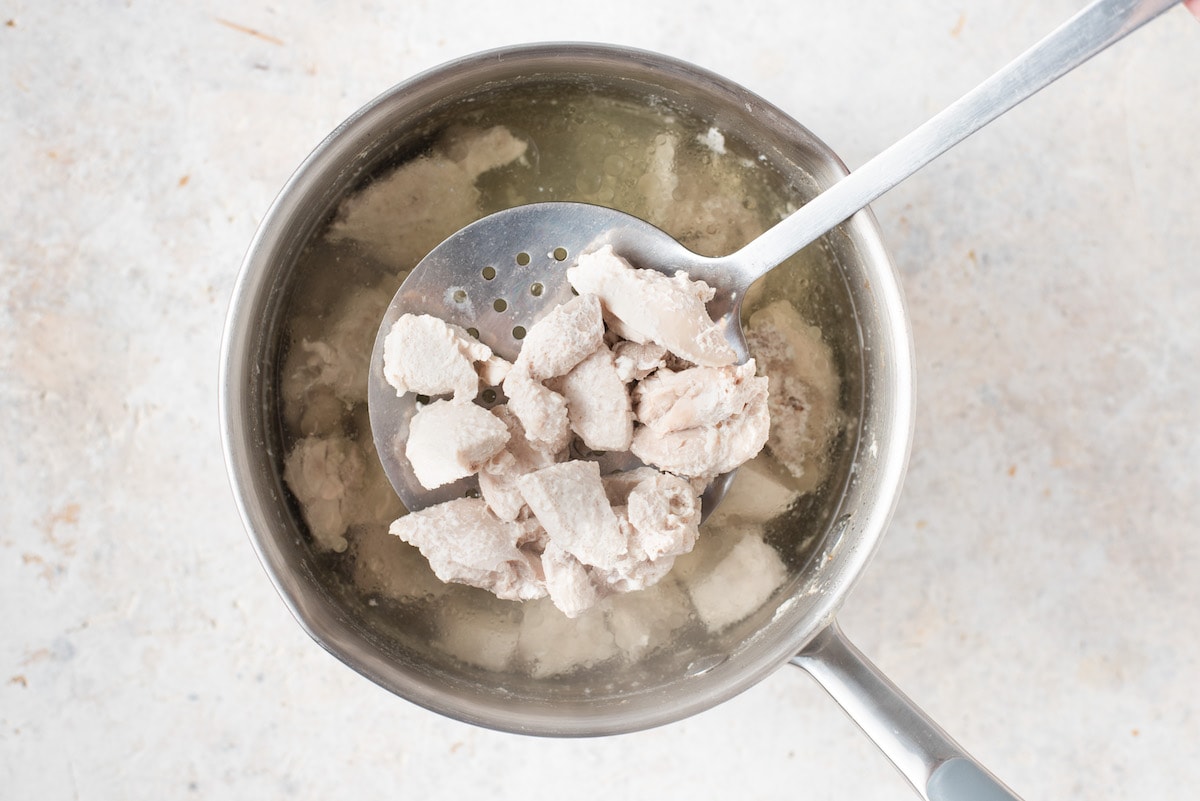 2. Dry roast (toast) the cinnamon stick, pumpkin seeds and sesame seeds separately in a dry skillet (with no oil) until browned but not burned.  The pumpkin seeds will pop when they’re fully toasted. 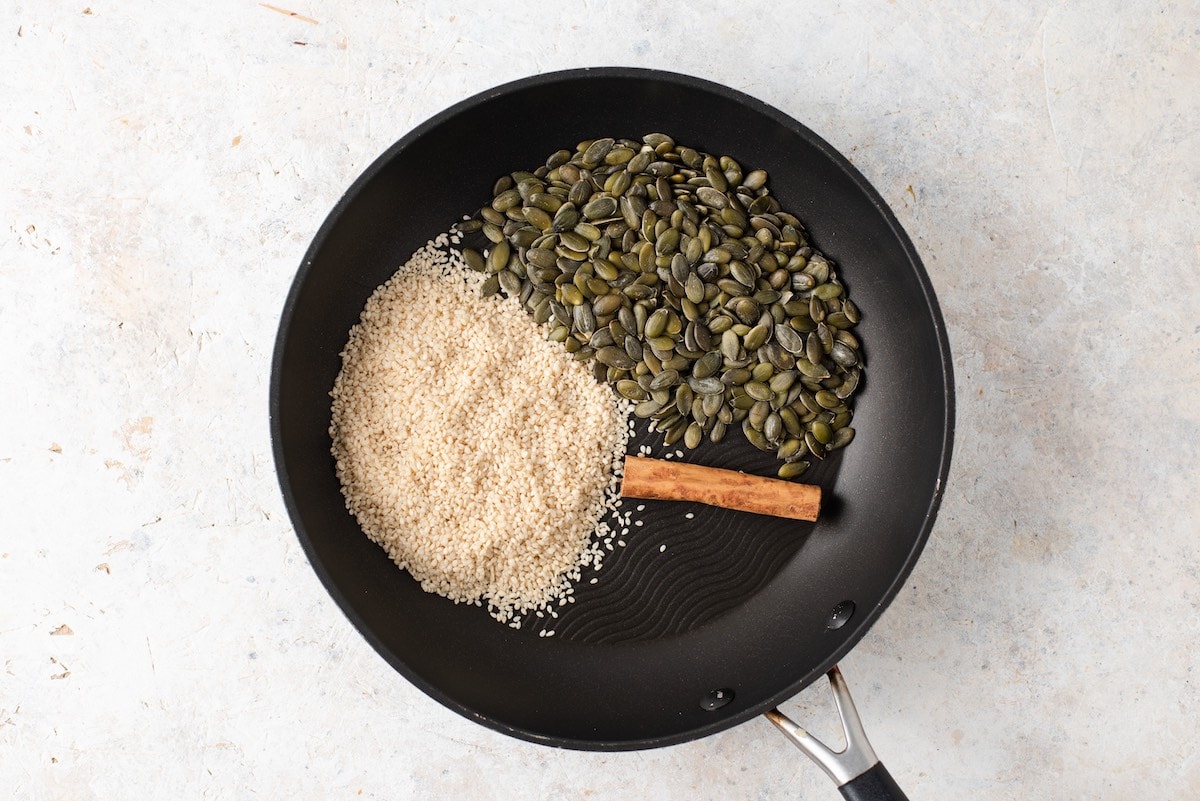 3. Dry roast (toast ) two corn tortillas (or a piece of crusty French bread) in the same dry skillet. Remove from pan, pour small amount of water over it to moisten and set aside.

4. Next, char the Roma tomatoes, chiles (stems and seeds removed) and onion over a dry skillet in batches until very well browned. 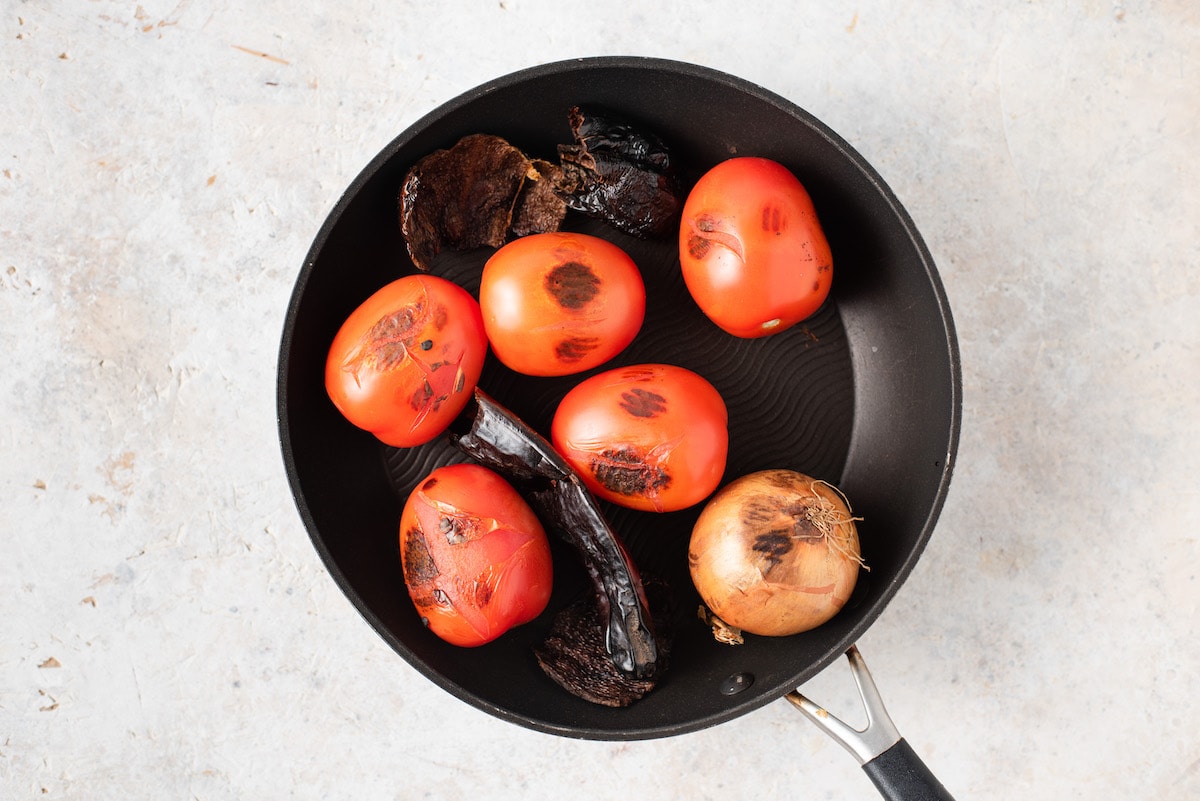 5. Then, process the toasted sesame seeds, pumpkin seeds and cinnamon stick in a spice grinder or food processor until a very fine powder. You’ll likely need to pulse it several times to get it fine enough. 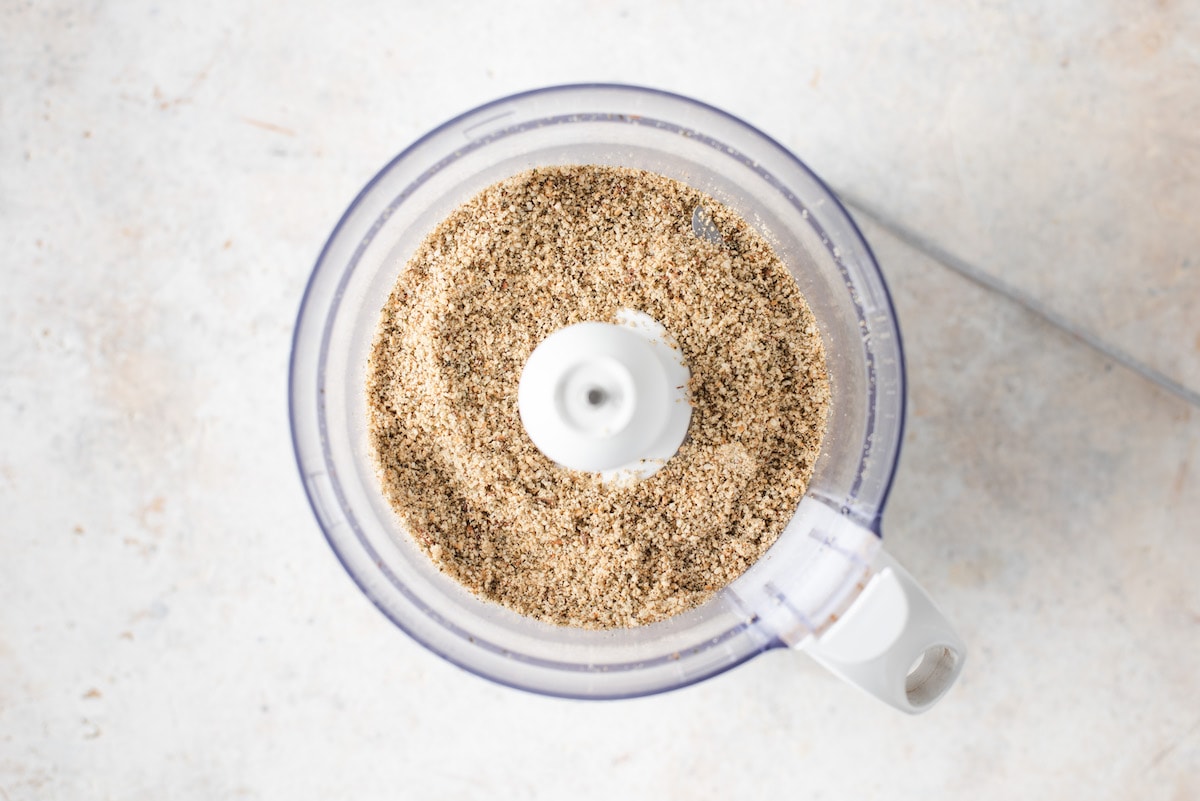 6. Add the charred tomatoes, chiles and onion to the food processor. Remove the stem ends but don’t peel the tomatoes or onions. The charred skins add extra flavour and aroma to the sauce. 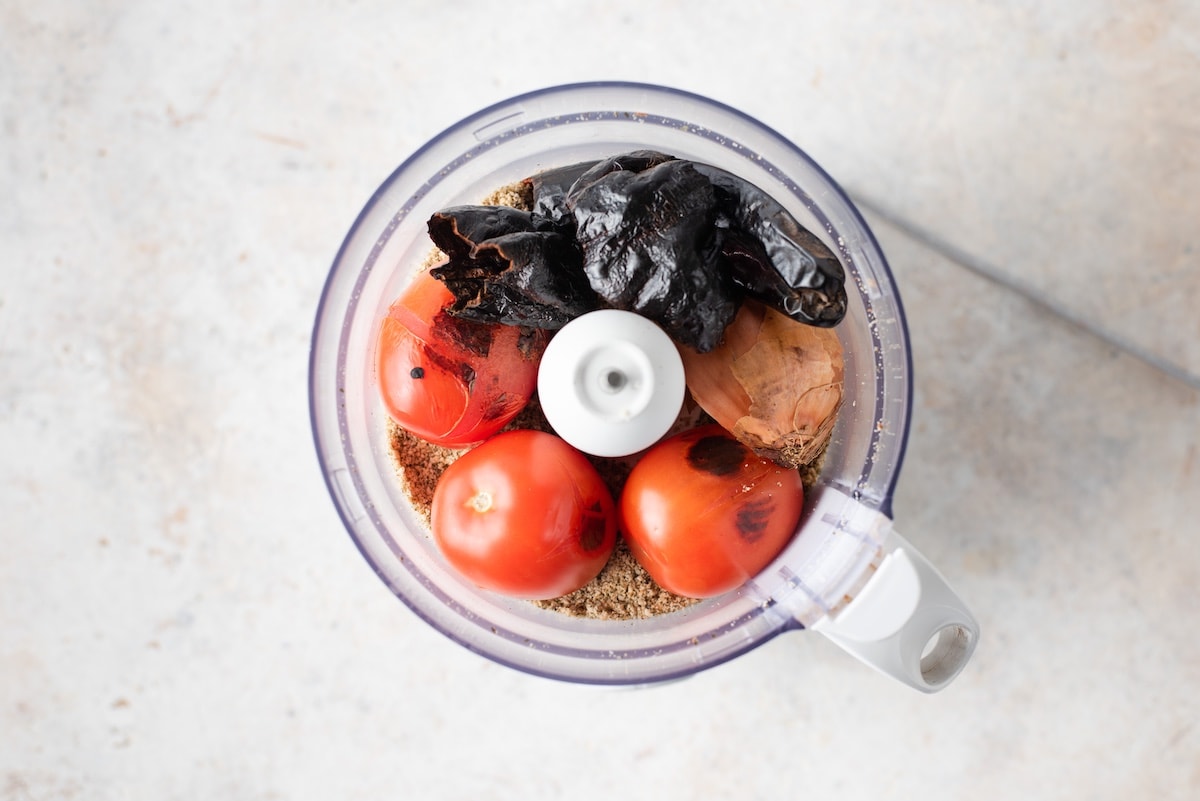 You might be surprised to see the whole onion – peel and all – being used in this recipe. Using fruit or vegetable peelings while cooking is very typical in Guatemala. The first time I used pineapple husk to make Ponche de Frutas Holiday Punch I had my doubts. But I was amazed to discover it did improve the flavour. Now, I’m a convert to the advantages of cooking with peels.

When it comes to onion skins, they add a deeper colour to the sauce and, according to the Farmers’ Almanac, also provide vitamins A, C, E, and numerous antioxidants. Use organic veggies and give it a try!

8. Add the achiote, cilantro and a half teaspoon of salt to the mixture. Process for several minutes until very smooth. 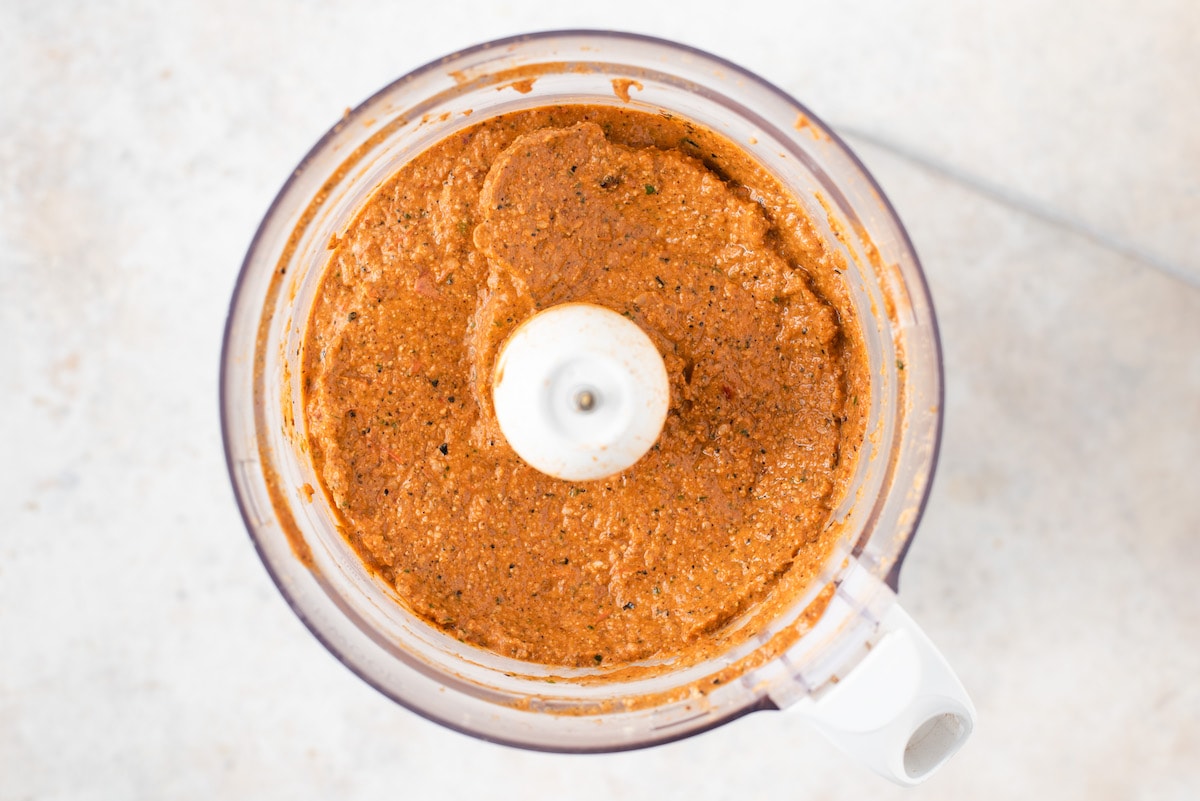 9. Add the toasted and soaked corn tortillas (or French bread) and four cups of reserved chicken broth to the tomato and seed mixture and process until very smooth.

10. Pour the sauce into the pot, bring to a low boil. Add the chicken. Simmer over a low heat for 15 minutes or longer until the sauce is very thick and a deep red colour. Add more water or broth if you prefer a thinner consistency.

11. Add the chopped and pre-cooked vegetables (if using) at the very end. 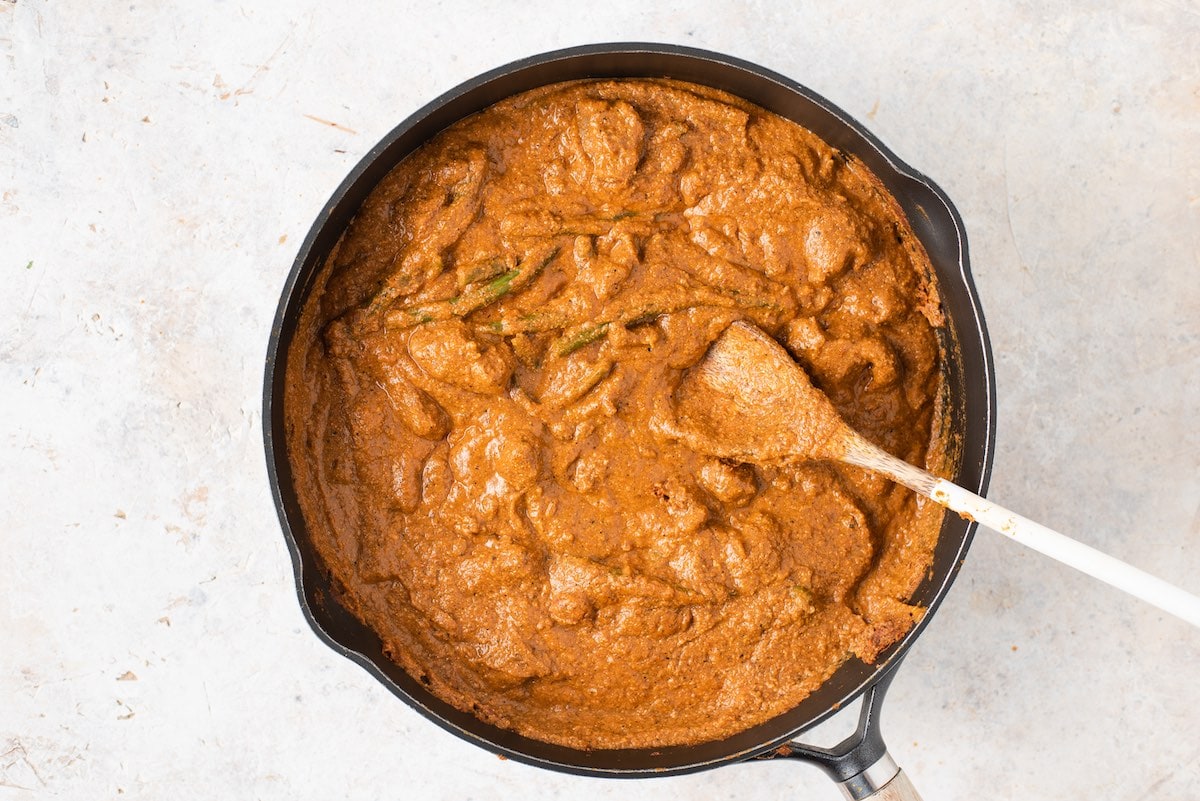 12. Serve with a sprinkling of toasted sesame seeds or finely chopped cilantro, white rice and wedges of fresh avocado on the side.

Tips and Variations on Pepián Guatemalteco

Even though pepián contains dried chiles, it’s just mildly spicy. To boost the heat factor, serve it with a Guatemalan hot sauce like Picamas. Or try my favourites, Marie Sharp’s Habanero salsa from Belize and homemade chirmol, a charred tomato hot sauce.

Another option is to serve some toasted chiltepin pepper flakes on the side. Then people can add hot peppers to their dish according to their taste preference.

If you make this recipe, please rate it and tag us on Pinterest @atastefortravel and use #atastefortravel. We’d love to see your food photos! 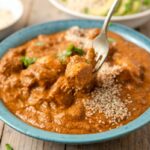 If You Enjoyed this Dish, You’ll Love These Guatemalan Recipes: