Tapado, a delicious seafood soup with coconut milk, is a traditional dish from the Caribbean coast of Guatemala, Belize and Honduras. 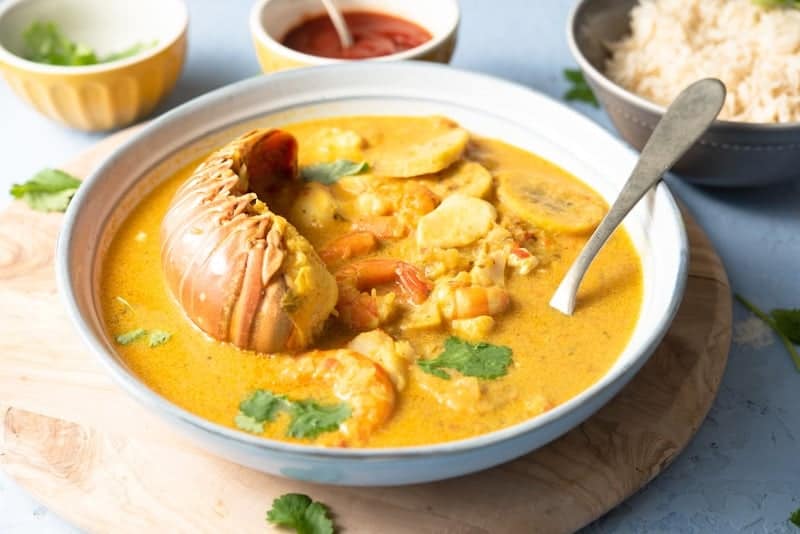 One of the most famous dishes that highlights the African influence on Latin cooking, this coconut seafood soup originates from the Garifuna communities on the coasts of Guatemala, Belize and Honduras.

With its sunny tropical flavour, Guatemalan tapado soup is one of the most popular traditional Guatemalan foods from the country’s Caribbean coast. It’s a flavourful concoction of seafood, plantain, yucca, coconut milk and fresh spices. It’s also very easy to make.

This Afro Guatemalan recipe for tapado soup is sure to become one of your favourite dishes for everyday or entertaining.

Unlike the hearty stews of the highlands of Guatemala such as kak-ik turkey soup, pulique and pepian, tapado seafood soup hails from Puerto Barrios and Livingston on Guatemala’s Caribbean coast.

It’s an especially popular dish during Garifuna Settlement Day, one of the largest, most exuberant  festivals in Guatemala.  It’s also popular in Tela, Roatan and other beach destinations in Honduras.

This stretch of the Caribbean coastline from Belize to Honduras is home to the Garifuna people, a distinct cultural group originally from Africa.

The music, religion and culinary traditions of the Garifuna people are quite distinct from those of the Maya from the highlands. You’re more likely to see fish, shrimp, coconut, plantain, banana and hot pepper sauces in the typical dishes in this region.

Insider Tip: If you’re visiting Guatemala, you don’t have to go all the way to Livingston for authentic tapado. If you’re headed to Coban, Esquipulas or Tikal, you can sample it at Marea Roja Restaurante located on the Atlantic Highway just before El Rancho.

Other popular Guatemalan dishes in Livingston, Rio Dulce and Puerto Barrios  include pan de coco, a coconut bread sold from baskets by women in the markets and pescado guisado con coco, whole fish steamed in coconut milk with vegetables, and Guatemalan ceviche, a seafood cocktail featuring a mix of shrimp, conch or fish.

The most important ingredient for tapado is the seafood you use. For the fish, use a firm white fish, such as halibut, haddock or cod for this recipe. Stay away from sole ( too delicate) or tuna  (too oily).

Try to find wild shrimp that isn’t farmed. Spiny lobster is optional but elevates the soup and makes it ideal for a special occasion such as Father’s Day or Valentine’s Day.

Another of the key ingredients for tapado soup is achiote, a spice and food colorant made from crushed annato seeds. It adds a slightly earthy taste and the all-important red colour to the soup.

It can be purchased at virtually every Latin food shop and is quite inexpensive so is well worth adding to your pantry.

If you don’t have any Latin food shops in your neighbourhood, you can also purchase it on Amazon in a paste or powder form such as the popular  El Yucateco Achiote Red Paste, 3.5 oz.

They’ve also regularly introduce exciting new products such as coconut vinegar, a wellness product that’s packed with so many health benefits its vying with apple cider vinegar in popularity.

Importantly for our family, none of the Grace Food Product line contains the Monosodium Glutamate (MSG) additive. So you don’t have to worry about having an adverse reaction if you have a sensitivity to MSG.

How to Make Tapado – Seafood Soup with Coconut Milk

Begin by making a sofrito, a typical base for many Guatemalan and Latin American soups, stews and  dishes. While in countries such as Spain, Portugal or the Caribbean a sofrito, refogado or sofregito might include peppers, garlic and spices, in Guatemala a basic sofrito always includes tomato, onion and cilantro.

To make a sofrito for this tapado recipe, chop the peeled tomatoes, red peppers, jalapeno, cilantro and onions into small pieces and sauté the mixture in vegetable oil until soft, but not browned.

It should be saucy and not dried out.

Add the achiote to warm fish broth or water and stir until completely dissolved.

Next, pour the seafood stock (or water if you’re using) with the dissolved achiote into the sofrito in your soup pot.

Bring the broth to a low boil, add the sliced plantain, green banana and yucca  to the broth. Then, add the coconut milk and simmer the vegetables for 10 minutes until almost done.

When adding the coconut milk be sure to stir the contents within the can of coconut milk first. Mix the rich coconut cream from the bottom of the can with the thinner coconut milk at the top.

Next, add the mix of seafood (lobster, fish, tiny crab or shrimp) into the broth with the partially-cooked plantain and yucca being sure to submerge the seafood into the broth.

Add more water, if necessary, to cover the seafood. Simmer for 10 minutes until the seafood is fully cooked.

Garnish with chopped cilantro and serve with white rice and hot sauce on the side. 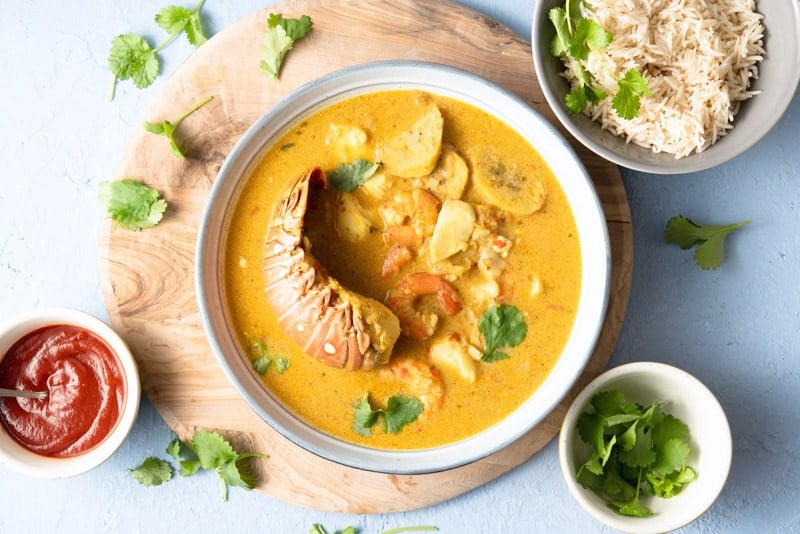 In Guatemala, tapado is often served with a crispy, whole fried fish on top. This is also an option if you’d like to go with the traditional Garifuna version.

If you try this recipe, be sure to rate it and let us know how the dish turned out in the comments below. We’d love to hear from you! Or tag us at #atastefortravel 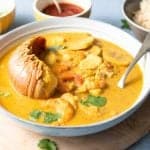 If You Liked This Post You May Also Enjoy:

Check out our other easy Guatemalan recipes or traditional recetas guatemaltecas below.

Pulique: A Ceremonial Chicken from A Mayan Cooking Class in Guatemala 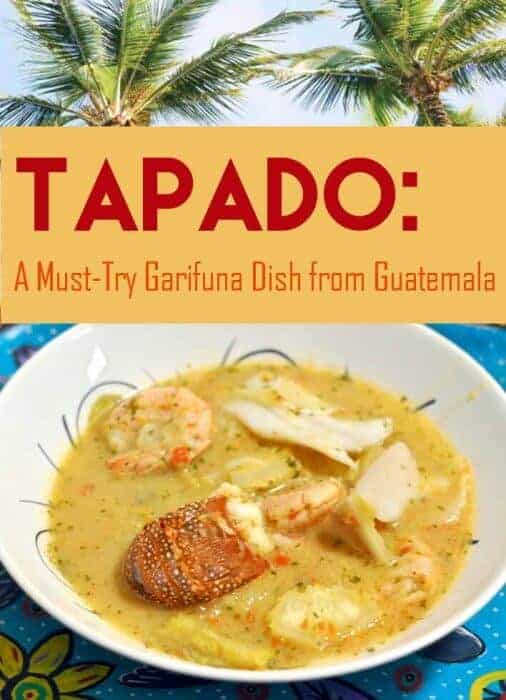 « Is Guatemala Safe? 25 Tips for Safe Travel in Guatemala
The 6 Best Beaches in Huatulco Oaxaca »

Is Guatemala Safe? 25 Tips for Safe Travel in Guatemala
Next Post: The 6 Best Beaches in Huatulco Oaxaca