Are you wondering where to go, what to do and where to eat in Ontario? Whether you’re interested in exploring the urban centres, diving into local cuisine or taking a road trip into the countryside, this travel guide will help you choose where to vacation in Ontario. 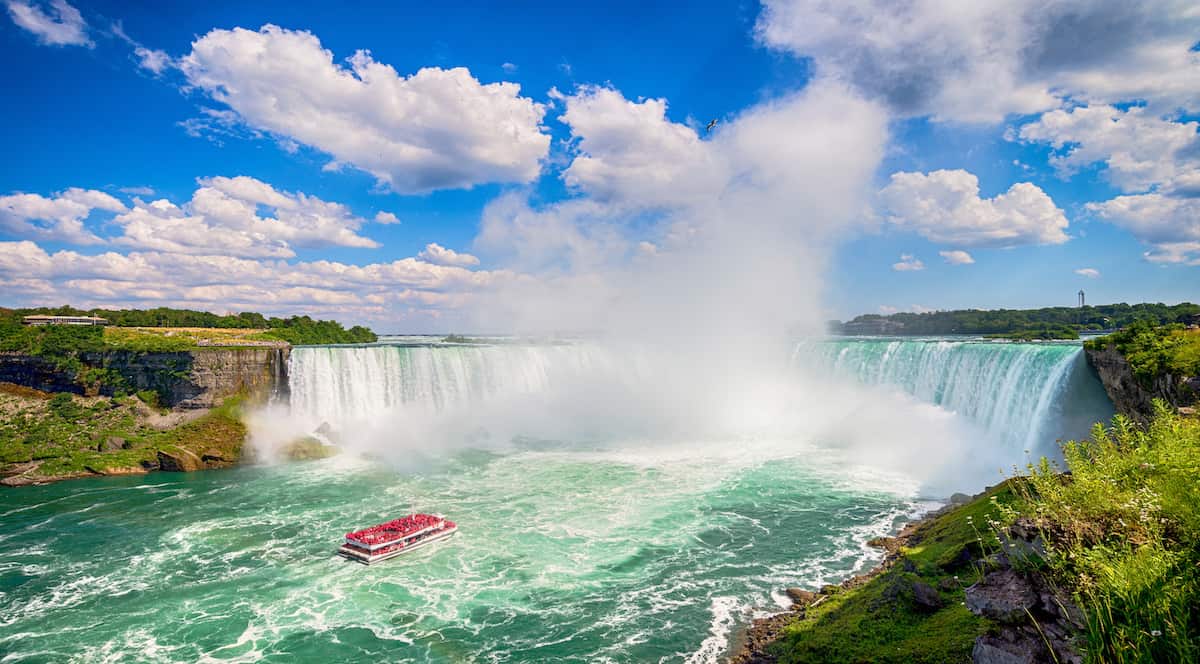 Ontario is home to almost  40% of the total population of Canada. It’s also Canada’s main economic hub and is where you’ll find the country’s capital, Ottawa, and the largest city in Canada, Toronto.

Toronto and Ottawa are the epitome of what Canada stands for — diversity. Each city is an eclectic mix of diverse cultures that fuse to create a unique atmosphere, an interesting vibe and a wealth of culinary opportunities.

Top food and drink to try in Ontario:

Ottawa is known as the government and university city as it’s the place where the Parliament of Canada is located as well as several universities, including the University of Ottawa and Carleton University.

Toronto is the international city — a city known for its cultural diversity, mouth-watering food, culture, museums, and attractions such as the CN Tower, which at one point was the tallest tower in the world.

But Ontario is so much more than its cities. It’s also a province with beautiful natural diversity.

It has four main forest regions, each with unique characteristics and species, provincial parks, four out of the five Great Lakes, and famous Niagara Falls.

From city to cottage country, there’s something incredible for every type of traveler to experience.

Ontario is beautiful throughout the year, and the best time to visit depends on what you plan on doing during your stay.

Wintertime in Ontario can be magical, depending on where you go. Toronto can get grey and dreary during the winter months, but it lights up during Christmas time.

Not only is the city completely decorated with lights, but there are several outdoor skating rinks where you can go skating and warm up with a hot cup of cocoa.

If you’re looking for snow, then the Ottawa region is the perfect destination for you. The city itself has one of the world’s largest skating rinks, the Rideau Canal SkateWay, which winds its way through downtown Ottawa. While skating you can stop for some hot chocolate and even enjoy a Beaver Tail ( a sugared Canadian donut-like treat) or poutine.

But the winter activities are best outside of the city where you can enjoy things like cross-country skiing, tobogganing, horseshoeing, winter camping and so much more.

Ontario is also a great place to go skiing, the province might not have the same types of mountains as British Columbia and Quebec, but it does have a couple of spots, including the Blue Mountains.

If cold isn’t your thing, then summertime in Ontario is bliss. There are several parks, forests and beach towns where you can relax, eat local food and enjoy the sunshine.

Or why not head down to Niagara Falls to not only see the waterfalls but take a trip through wine country at Niagara-on-the-Lake. Take a cycling tour through a vineyard in the summer or sample icewine in the winter, Niagara is an all-season destination.

Autumn in Ontario can be magical as summer winds down and the leaves begin to change colours. There is nothing quite as memorable as taking a road trip while the leaves are changing from green into red and yellow.

In the fall, you can also stop at the many farmer’s markets and roadside stalls. Maple syrup, apple cider, peaches, preserves and fresh produce are just a few of the local food finds.

Each season has something special in store for you in Ontario.

Ontario can be a pricey province to visit, especially if you are a foodie. Toronto is home to some of the best restaurants in the country, but they don’t come without a price.

But you can also eat fantastic food on a budget. Craving Vietnamese? You can get dumplings or steamed buns for under $5. How about Mexican? Well, you can score authentic Mexican tacos de tinga or chicharron for just $1 each!

Toronto has food that will appeal to everyone. The secret is to take a walk around and see what you find. The sit-down meal should be around $30 per person (not including drinks or tip). Prices are about the same in Ottawa.

The budget depends on what you plan on doing in Ontario. Spa resorts, romantic getaway weekends, a trip to Niagara Falls, or a city excursion can be expensive. However, costs will be lower if you’re hiking and camping in the wilderness with a tent.

When it comes to hotel accommodation, Toronto in general is an expensive city. A hotel in downtown Toronto can go from $150 per night until $1,000 per night, depending on its location and its star rating.

Expect to pay around $250 to $300 per night for double occupancy at a 4 star downtown hotel, like the Hyatt, The Westin, or the Marriott. But you’ll save money on transportation as you can walk or take the TTC.

Niagara Falls is a tourist destination so if you plan on visiting the falls, prepare to pay for it. Hotels aren’t cheap and the restaurants are few and can also be quite expensive. Our recommendation is to do a quick day trip from Toronto (1 hour and 44 minutes by car) so that you can save a little bit of money.

Finally, if you are looking for a weekend getaway, then there are a lot of different options depending on your budget. You can rent a cottage, in Muskoka, for around $500 to $1,000 per day. A four-star room at a spa or golf resort will cost around $300 per night for double occupancy. A room in a 2 to 3-star hotel can cost as low as $150 per night for double occupancy.

In Sauble Beach, a motel, albeit a chic one, is around $300 per night for double occupancy in high season. Food can be less expensive, but most people tend to bring their own food especially if they are camping or in cottage country.

From the Xerox Icewine Gala to Discovery Pass weekends with VQA wine, here’s what not to miss at the Niagara Icewine Festival.

END_OF_DOCUMENT_TOKEN_TO_BE_REPLACED

This guide captures how to experience the best of Italian cuisine in Toronto, Canada! From cooking classes to pizza, here’s what to do and eat!

END_OF_DOCUMENT_TOKEN_TO_BE_REPLACED

Looking for an easy lakefront escape without having to board a plane, don a mask and navigate airports? If you are an Ontarian, Burlington just might be the thing. I’ll admit to never having been to Burlington until this weekend, although I have lived about 50 kilometers away, in Toronto, for over 25 years. I …

END_OF_DOCUMENT_TOKEN_TO_BE_REPLACED

From exploring Casa Loma to sipping craft beer, here are some top things to do in Toronto.

END_OF_DOCUMENT_TOKEN_TO_BE_REPLACED

Featuring artisanal local cheese, this brie and basil pizza is a taste of Ontario.

END_OF_DOCUMENT_TOKEN_TO_BE_REPLACED

Take a journey to Ontario’s Prohibition era on this fun weekend getaway.

END_OF_DOCUMENT_TOKEN_TO_BE_REPLACED

Enjoy a taste of summer at ONE Restaurant Toronto.

END_OF_DOCUMENT_TOKEN_TO_BE_REPLACED

At these luxury Muskoka resorts, you can enjoy the quintessential cottage experience — gnarled trees, Canadian Shield and s’mores — minus lumpy mattresses and horseflies.