This mild, lightly-spiced chicken stew, known as pulique or pulique de pollo, is a delicious traditional Mayan dish typical in the highlands of Guatemala.

It’s a popular Guatemalan food eaten during holidays and ceremonies, special events and other large celebrations.

As far as grocery runs go, the trip from Panajachel to Sololá to buy ingredients for our pulique recipe is a stunner. With views of a cascading waterfall, Lake Atitlan and a 2-mile high volcano, it sure beat my usual trek to No Frills in Toronto.

It was 9:00 am and I was riding in a Blue Bird school bus aka Guatemalan “chicken bus” on a mission to scout out ingredients for pulique de pollo, a ceremonial dish popular among the Maya people in the midwestern highlands in Guatemala.

Unlike many other Mayan dishes such as kak’ik and pepián  de pollo that require the charring of vegetables and chiles prior to cooking, the veggies for pulique are simply simmered.

Olga, my Spanish  teacher at Jardin de America Spanish School, who is Kaqchikel  indigenous Maya, had offered to substitute a traditional Guatemalan food cooking class for our desk-bound studies.

So, all we had to do was get to the town of Sololá, a 20 minute bus ride into the mountains and buy the ingredients for our pulique recipe.

Upon arrival in Sololá, we hiked the six uphill blocks from the main square to the market.  Market day is Mondays and Fridays  so the streets were bursting with vendors and shoppers in traditional Guatemalan clothing.

Pick-up trucks were packed to the brim with boxes of produce as well as livestock and crates of chickens.

“Follow me” said Olga, as she disappeared in the crowd and then materialized  magically in front of a stack of tomatoes. I dodged a vendor who was balancing 15 cartons of eggs on her head.

But my hesitation earned me a giant-sized push from a tiny woman who looked like Grandma Moses but whose biceps rivalled Vin Diesel’s in strength.

The market was a whirlwind of colour, people and new ingredients. From maxan leaves large enough to use as yoga mats to blue crabs skewered live on thin reeds, there was plenty to gawk at.

If you weren’t sure what to buy, you could just drift on the momentum of the crowd until you arrived at a food stall that looked promising.

For our pulique de pollo we stocked up on criollo ( yellow skinned) chicken which is more expensive than white chicken ( 12 Q vs 8 Q a pound) but more flavourful.

With the rest of the ingredients for our pulique recipe in hand — beef, cilantro, huisquil ( also known as chayote) and masa flour —  we headed back to the bus.

Back in my mini-apartment kitchen in Panajachel (read more about it in this Guide to One Month in Panajachel)  we got to work. My job was peeling the vegetables–carrots the size of rolling pins, potatoes and huisquil, a vegetable pear also known as chayote.

We’d chosen the prickly huisquil (for better flavour) so my job wasn’t as easy as it sounds.  After disinfecting  the cilantro, green onions and hierba buena with Microdyne solution, Olga began cooking.

“If you’re making pulique for 50 people, it’s traditionally done outdoors over an open fire with a huge paddle,”  she explained. “Your arms are usually sore and  singed with fire by the time you’re finished.”

Fortunately, there was just the two of us so no burnt  arms were needed and the sauce thickened up nicely.

She served it  in a bowl with the vegetables and meat on the side.

I lifted a spoonful into my mouth and was surprised to discover it was mild but packed with the flavours of fresh-picked market vegetables and accented by  the nutty taste of maize corn. I love spicy food so I crushed chiltepe hot peppers over top.

1. Simmer the beef bones (in water to cover) with 3 leaves of hierba buena ( substitute mint if needed), cilantro and a green onion for one hour.

2. Simmer chicken (in enough water to cover) with 3 leaves of hierba buena, cilantro and a green onion for 30 minutes. Remove chicken and reserve.

3. Add the chicken to the broth and simmer until tender but not mushy.

4. Strain the beef and vegetables, reserving the liquid.

5. Mix the dry masa with enough water so you can form six small balls out of it.

6. Liquify the achiote with 3 tomatoes, 3 balls of masa and the liquid from the beef and chicken. Add more balls of masa dough if it looks watery.

7. Strain the tomato masa mixture into another pot on the stove.

8. Stir with a wooden spoon over medium low temperature until thick and creamy.

If you have leftover Masa Harina, use it up in our recipe for Easy Gluten-free Plum Cobbler or in Champurradas, a traditional Guatemalan cookie. 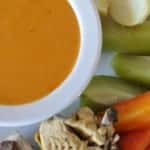 Jardin de America Spanish School: To enroll in 4 hours of classes per day with one student and one teacher, the cost of lessons is $110 USD a week (subject to change). If you’re planning to study for longer than a week, you can ask for a discount like I did.

Excursions to market towns, cultural activities or dancing lessons are free but you’ll need to pay your own bus fare and costs for entrance fees or materials if applicable. Jardin de America Spanish School

Bus from Panajachel to Solola: Fare is 3Q each way. Tip: Sit near the back so you can get off the bus faster.

Where to catch the chicken bus: In Panajachel, catch the bus to Solola on Calle Principal  between Avenida Santander and Calle del Embarcadero. The bus will be parked on the north side of the street.  Check with the driver to be sure of the destination before boarding. In Solola, catch the bus to Panajachel between the church  and Central Park.

« A Guide to Fireworks, Fun and Food at Las Fallas Festival in Valencia
5 Reasons to Visit Valladolid (Cenote Zaci is One Big Reason) »

A Guide to Fireworks, Fun and Food at Las Fallas Festival in Valencia
Next Post: 5 Reasons to Visit Valladolid (Cenote Zaci is One Big Reason)