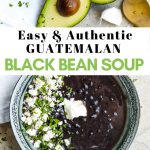 When life gets stressful, there’s something soothing about Guatemalan black bean soup.  It smells great while it’s cooking plus its rich earthy flavour is like soul food in a bowl. Lightly creamy, it’s the perfect make-ahead meal for easy lunches and dinners.

It also happens to be a healthy and totally vegetarian soup. Ideal for chilly days, it’s just as welcome on a hot summer day when topped with a dollop of cool sour cream or crema.

Although making the perfect black bean soup might sound simple, there’s a lot more to consider than you might think! Canned black beans, dried beans, pre-soaking or not pre-soaking the beans, spices or no spices…?

Being married to a Guatemalan means the standards for black beans are crazy high in our household. Black beans are enjoyed in soups, in rice dishes, as frijoles volteados (refried), served alongside entree as a side dish and even stuffed inside caramelized plantain for a sweet dessert.

My husband’s side of the family is so particular about black beans, they bring suitcases full of black beans with them when they travel! And we now take black beans with us to the Caribbean to deliver them to an ex-pat friend who gets homesick for Guatemalan black beans.

You too will become a fan once you dive into the delicious world of black beans Guatemalan-style! This recipe comes direct from my husband’s family ranch in Zacapa, Guatemala so it’s as authentic as it gets!

While there’s lots of discussion in Guatemala about which region produces the best black beans (some claim Parramos produces the best), for the rest of us the main objective is to make sure you’re buying black turtle beans.

They’re called black turtle beans because of their hard shell-like appearance. These small, black and shiny beans are members of the Phaseolus vulgaris species which is quite a bit different than Glycine max, the black soya beans used for paste in Asia.

High in protein and fiber, black turtle beans have been cultivated in the Americas long before Columbus crossed the Atlantic. The holy trinity of beans, maize and squash have been the foodstuff of the Maya, Aztec, Inca and other indigenous societies for thousands of years.

Although you’ll also see fava beans, white beans and even red beans in Guatemala, black beans are without a doubt the most popular.

Once you have your supply of black beans on hand, store them in a cool dry place like a pantry. Be sure to sort them before using. When sorting just look for small stones that might have been incorporated into the bag. Rinse and drain the beans before using in a recipe.

One thing you’ll notice right away about the ingredients for Guatemalan black bean soup is that there are really only a few main ingredients – black beans, onion, garlic, water and salt – in the soup itself. So that means no cumin, chicken broth, jalapeno peppers or other ingredients you’ll often see in other recipes.

But you can get creative with the garnish. Typical toppings include cilantro, crema (the Latin American equivalent of crème fraiche) and queso de Zacapa, a salty, sharp-flavoured dry cheese produced in homes in the lowlands of Guatemala.

A good substitute for crema is sour cream, while alternatives to queso de Zacapa include Mexican cotija cheese, Greek feta or even parmesan cheese.

Other delicious toppings include thinly-sliced radishes, fried strips of corn tortilla chips, chopped peppers or shredded cabbage. The garnishes can be set at the table for all to pick and put on their soup as they wish.

1. The first step in using black beans is to sort them to remove any small stones. Then rinse them carefully.

2. While many people begin making their black beans by soaking the beans overnight, it’s actually not necessary. According to recent tests by Epicurious, it’s a myth that you need to soak beans overnight. You don’t even need to use the quick soak method, which involves bringing the beans to a boil and then allowing them to soak for 2 hours.

However, pre-soaking beans and discarding the soaking liquid can help with the digestibility of beans as it removes some of the oligosaccharides, which can cause gastrointestinal discomfort for some people. So, if you do want to pre-soak your beans discard the soaking liquid before you begin this recipe.

Since this is my husband’s family recipe, I’ve followed their lead and cooked the beans from the dried state without pre-soaking of any kind.

3. Combine the chopped onion, whole garlic, water, salt and beans in a large pot. Bring to a boil and simmer until tender but not mushy (about 1 ½ hours).

Black beans are quite forgiving and don’t get mushy easily, so the cooking time is fairly flexible.

Meal Planning Tip: Add an extra 1 1/2 cups water and 1/2 cup of dried black beans to the pot and reserve the cooked beans and liquid to use in our recipe for Guatemalan Black Beans and Rice.- Arroz Negro

4. Remove the garlic cloves from the soup, reserving one clove. Puree half of the beans with the one clove of reserved garlic in a blender (or use an immersion blender in the pot) and return to the pot.

5. Add more water to the pot if needed to reach desired consistency of soup, stir and reheat until warm.

6. Top each bowl with swirl of  crema or sour cream, the chopped cilantro, a sprinkle of dried cheese, preferably Queso de Zacapa, a strong-flavoured, salty, aged dry cheese from that’s made in the lowlands of Guatemala. Good substitutes include Mexican cotija cheese, Greek feta or even parmesan cheese.

7. Serve with a wedge of fresh lime, slices of fresh avocado and fresh tortillas de maize. Or, try this recipe for Healthy Air Fryer Plantain Chips. 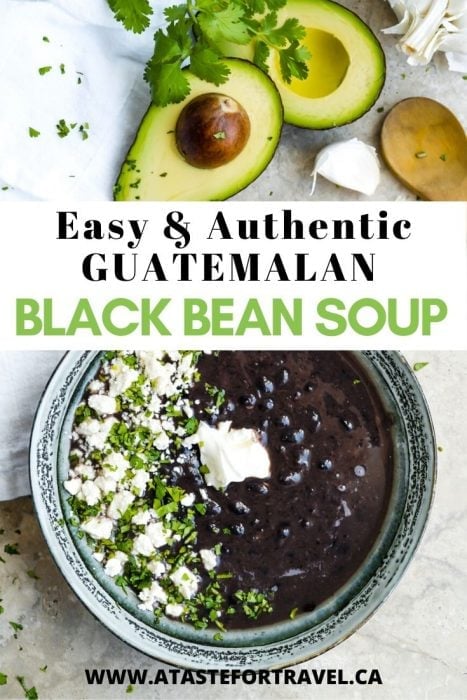 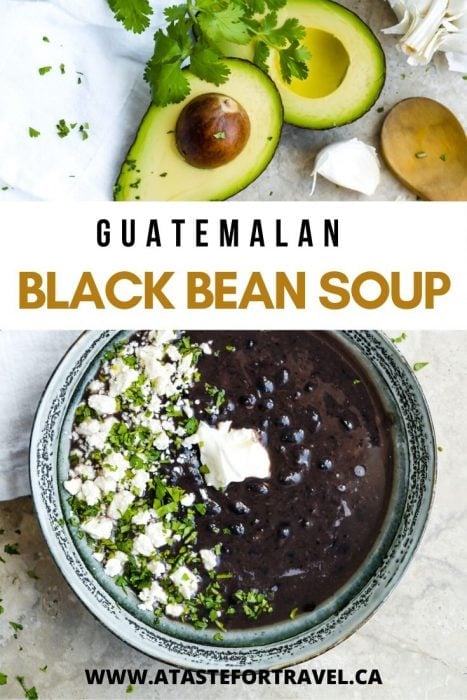