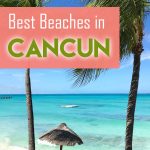 If you’re planning a beach vacation and are worried about the current seaweed conditions in Cancun and Riviera-Maya, this post has important information about seaweed season, an update on the Cancun seaweed problem and details on the sargassum seaweed forecast for 2021 in Mexico.

Over the past 10 years, I’ve personally walked the beaches of Mexico’s Caribbean coast during seaweed season many times. While the quantity of seaweed coming to shore varies every year, I’ve learned that certain beaches are more impacted by sargassum seaweed than others.

So, here are some tips on planning a vacation to Cancun and Riviera Maya, plus suggestions on how to find the best beaches for swimming, even during the height of seaweed season in Cancun.

Note: This is a recurring post and is regularly updated with photos and information on seaweed conditions right now and current seaweed problem in Cancun, Playa del Carmen, Cozumel, Puerto Morelos, Isla Mujeres and Tulum.  Scroll down to the sargassum seaweed map for 2021.

What exactly is sargassum seaweed and why is it a problem? Sargassum is a type of  brown algae that generally lies in the open ocean in the Sargasso Sea in the North Atlantic. Wrapped by ocean currents, this mat of seaweed floats on the surface of the water and serves as a resting area and spawning ground for a vast array of life from eels to sea turtles.

While sargassum seaweed is a natural phenomenon that has been occurring for centuries, the influx of sargassum in recent years have been larger, thicker and more  widespread.

Since 2011, blooms of sargassum have been appearing in the tropics sweeping up from South America through the Caribbean along the coast of Mexico and into the Gulf of Mexico and Florida. The  summer of 2018 witnessed the worst influx of sargassum brown algae in recent history. 2021 is turning out to be equally as bad.

The quantity of the sargassum seaweed combined with differences in the composition of the seaweed itself, has been posing problems for  destinations where vast quantities of seaweed are floating on the surface of the water, washing up on beaches, trapping marine life in the seaweed itself and using up the oxygen that fish need to breathe.

Various strategies — from raking it manually to using barriers to catch the sargassum before it reaches the shore  — have been devised to try to deal with the unprecedented waves of seaweed that have engulfed regions of the Caribbean and Mexico in 2015, 2018, 2019, 2020 and 2021.

Is it Dangerous to Swim in Sargassum Seaweed?

Sargassum seaweed in itself doesn’t pose a problem, says Dr. Jeffrey Rapaport at Holy Name Hospital in Teaneck (Emeritus head of Dermatology). Instead, it’s what the seaweed harbours that can cause skin irritations and other risks.

The seaweed when floating at the top of hot, shallow waters, can start to play host to microbes and strains of bacteria the skin is not accustomed to coming in contact with. Also, you have to remember that fish normally use sargassum as a breeding grounds — leaving toxins and eggs in seaweed.

With freshwater as well as saltwater swimmers should watch out for the growth of Cyanobacteria (which can normally be seen changing the water’s colour to light green).

Cyanobacteria can release neurotoxins, which not only can affect the skin but can cause the death of neurons that control most of the muscles and movements in your body.

Another risk occurs when sargassum seaweed gathers in large quantities, washes up on beaches and begins to decompose, releasing hydrogen sulfide gas, or H2S, a colourless, poisonous gas with an unpleasant rotten-egg odor,

According to an interview in the San Pedro Sun with Eric Najarro, Administrator at the Dr. Otto Rodriguez San Pedro Polyclinic II in Belize, inhaling small doses of the gas can trigger irritation of the eyes, respiratory issues and nausea, especially among at-risk people such as those with asthma, the elderly, infants and pregnant women. Certain animals, especially dogs, are also sensitive to the inhalation of hydrogen sulfide.

Another health risk to swimming with large quantities of sargassum seaweed is the potential for skin irritations and rashes.

Note that red tide and sargassum seaweed are two different problems. A red tide is a bloom of algae that discolours coastal waters and releases dangerous toxins. Eating shellfish or other seafood during an algal bloom is harmful to humans.

When is Seaweed Season in the Caribbean and Mexico?

In the Caribbean, seaweed season is generally May to October. The worst time for seaweed in Cancun, the Dominican Republic and much of the Caribbean is during the summer months.

Looking for vacation ideas on Caribbean islands not affected by sargassum seaweed? Check out our Guide to Caribbean Beaches without Sargassum Seaweed for 2020.

Although the government of Barbados declared a national emergency due to the enormous masses of sargasso on its beaches in 2019, many Caribbean beaches rarely experience a seaweed problem.

The popular resort town of Playa del Carmen has been experiencing a double whammy of challenges in recent years. The main problems are the erosion of its beaches and the influx of sargassum seaweed along the coast.

However, the state of Quintana Roo has been working hard on developing strategies to cope with these issues which are posing an environmental problem and preventing people from enjoying the coast’s famous beaches.

In addition to aerial surveillance, they have issued contracts to hire companies to collect and dispose of the seaweed.

The quantities of seaweed in Cancun and along the Caribbean coast will vary depending upon ocean currents, the size of the sargasso seaweed mat, seasonality, ocean currents and wind  conditions.

If you want to avoid the worst time for seaweed in Cancun and reduce the likelihood of it ruining your vacation, it’s worth considering which beaches to choose for your vacation.

In January 2020, the Yucatan Times reported large quantities of algae in Petempich Bay, in Puerto Morelos, Recodo Beach, in the municipality of Solidaridad (Playa del Carmen), as well as Punta Mosquitos on Holbox Island.

The rest of the coast was relatively clear.

This beach stretches along the northern shores of what’s known as Punta Cancun or the most northerly point of the Cancun Hotel Zone. There is a ferry to Isla Mujeres departing from the pier between the Riu and the Grand Fiesta Americana Coral Beach Cancun. The public beach occasionally  small amounts of seaweed but nothing that is bothersome.

It is usually protected from seaweed by nearby Isla Mujeres, however wind and ocean currents  can change and seaweed conditions at Grand Fiesta Americana Coral Beach Cancun can change quickly.

An advantage of Coral Beach is that the waters are calm and the entry is gradual with no steep drop-off, making it ideal for those who aren’t expert swimmers.

In my opinion, this is the best beach in Cancun for swimming. Beginner swimmers, small children and seniors will all enjoy swimming at this beautiful beach. The north beach on Isla Mujeres itself is almost always clear of seaweed.

One of the most popular public beaches in Cancun, Playa Gaviotas Azul is located at the northern tip of the hotel zone. Beach access  is between Coco Bongo and the Mandala Beach Club opposite Hooters via a narrow alleyway. Current seaweed conditions at Playa Gaviota Azul depend on the intensity of the ocean currents.

Most small clumps of seaweed on the sand are raked up by hotel staff . There is often very little sargassum seaweed floating offshore. The major hotels on these beaches include the all-inclusive Krystal Cancun and the Hyatt Ziva Cancun at the point of the peninsula.

However wind and ocean currents  can change and seaweed conditions can change quickly.

SCROLL DOWN TO SEE THE LATEST MAP OF SEAWEED CONDITIONS in CANCUN .

This long, wide public beach at the southern end of the Hotel Zone is known as Playa Defines and is one of the most popular beaches in Cancun. You’ll also see line-ups of people waiting to get a photo-op in front of the CANCUN  sign.

The amount of seaweed on Playa Delfines varies considerably from week to week. See below for a photo of what it looked like in 2018.

However wind and ocean currents  can change and seaweed conditions can change quickly.

Another option is to head to Isla Mujeres or Isa Cozumel. The leeward beaches on those islands almost always have no sargassum seaweed.

Check our list of the best all-inclusive resorts in Cancun Riviera-Maya.

A report by Brigitta Ine van Tussenbroek, an ocean researcher from the Institute of Marine Sciences and Limnology at the National Autonomous University (UNAM) suggested that large quantities of sargassum seaweed would return to Mexico’s Caribbean coast in 2019. Her report was quite accurate.

For seaweed season in 2021, the  Sargassum Early Advisory System (SEAS) forecasting  project showed several large floating masses of seaweed in the Atlantic between southern Africa and Brazil. Whether it landed in Cancun, Chetumal or the Riviera Maya depended much upon atmospheric conditions such as trade winds.

According to the University of South Florida’s  Outlook of Sargassum blooms in the Caribbean Sea and Gulf of Mexico, the level of sargassum seaweed in December 2019 was much lower than it was in December 2018.

This suggested that the seaweed season in 2020 would not be as extreme as it was in 2019. This prediction was quite accurate and although there were reports of sargassum seaweed at various beaches in early May, which was unfortunately an early start to the problem most of the sargazo seaweed was gone by mid-September.

Declaring a State of Emergency enabled local authorities to access funding to combat the volume of seaweed by removing accumulations and blocking it by various methods.

For seaweed season in 2021, according to the University of South Florida’s  Outlook of Sargassum blooms in the Caribbean Sea and Gulf of Mexico,  the forecast for abundant seaweed in 2021 was accurate.

Chetumal and Playa del Carmen have been hit the worst. But it’s important to note that from Tulum to Cancun seaweed conditions can change daily depending on tides and water temperature.

Sargassum Forecast for Seaweed Season in Mexico in 2021

In Mexico, sargassum seaweed season is generally between May and October each year. If you travel to the Caribbean coast of Mexico outside of that time period you can generally expect  to avoid large mats of seaweed on the beaches. 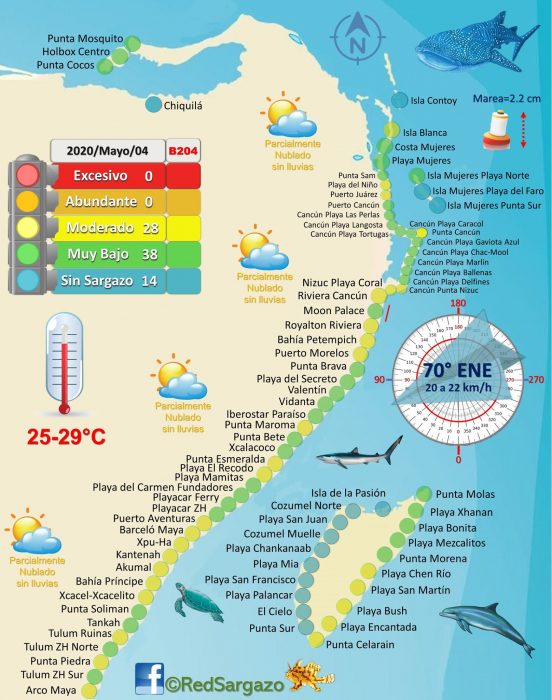 However if you are planning a vacation during seaweed season (May to October), monitor current seaweed conditions throughout the Caribbean, Mexico and the Gulf of Mexico by consulting the following resources: 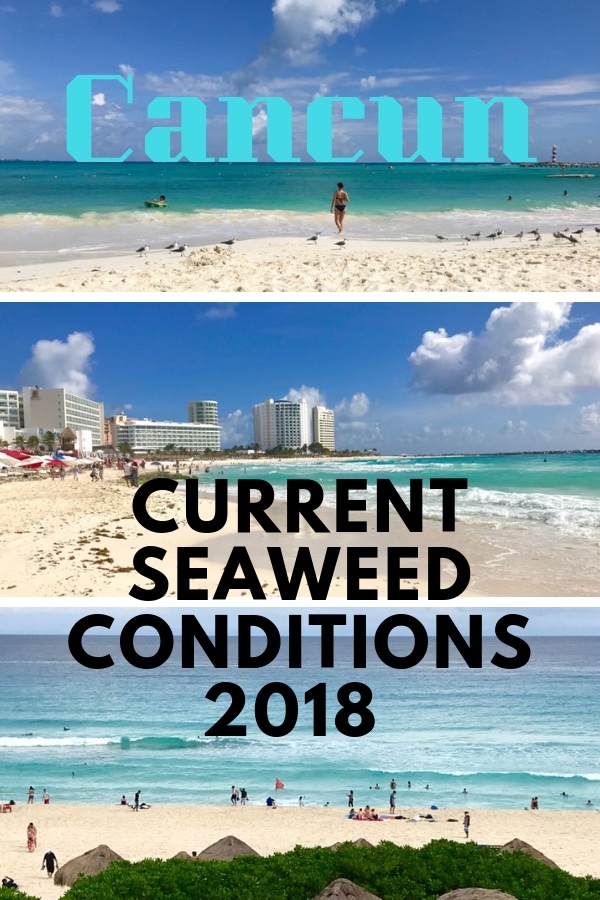 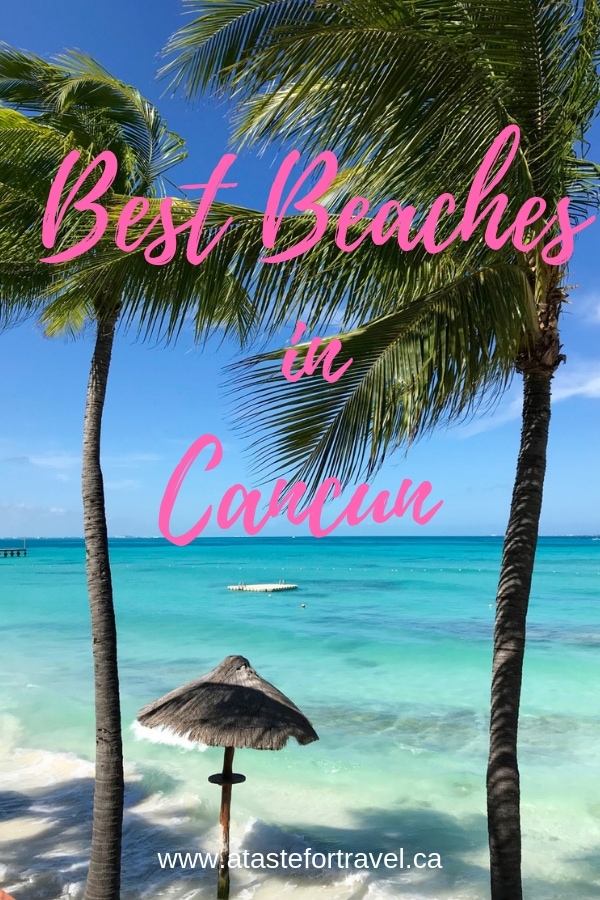 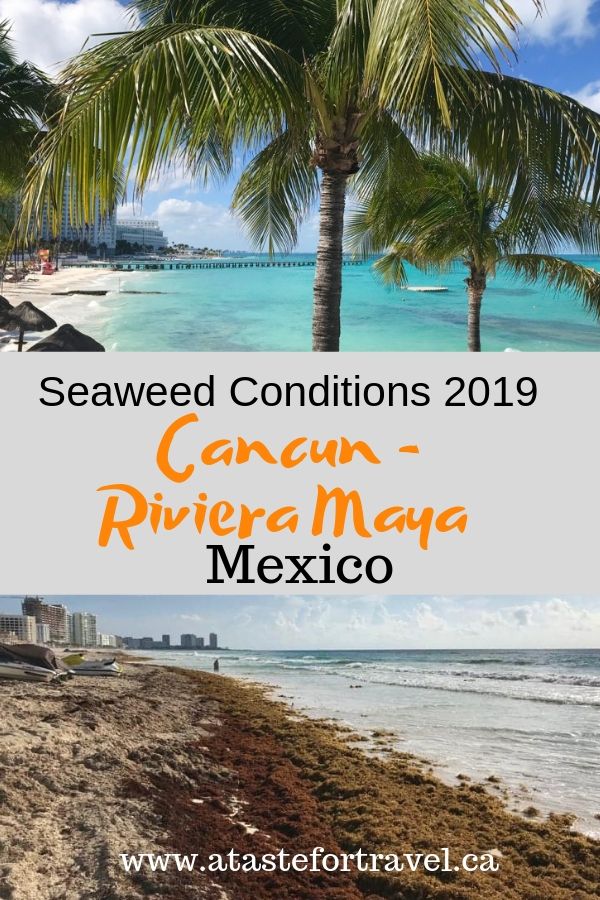 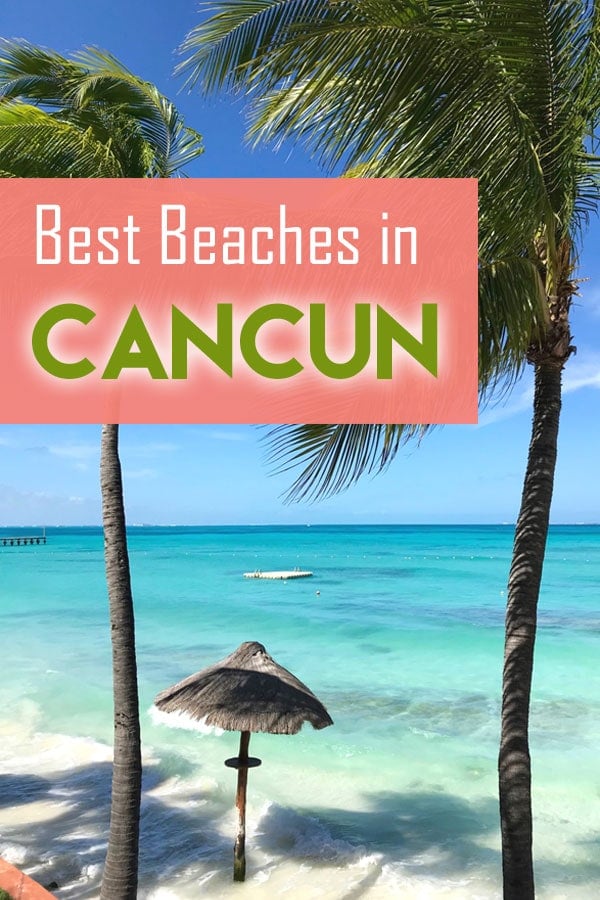 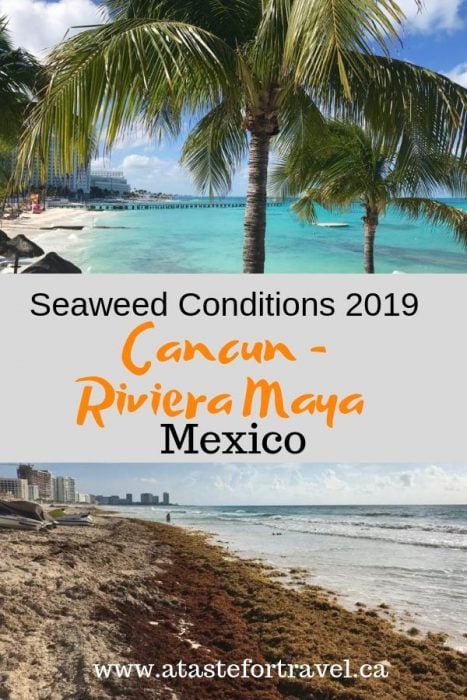 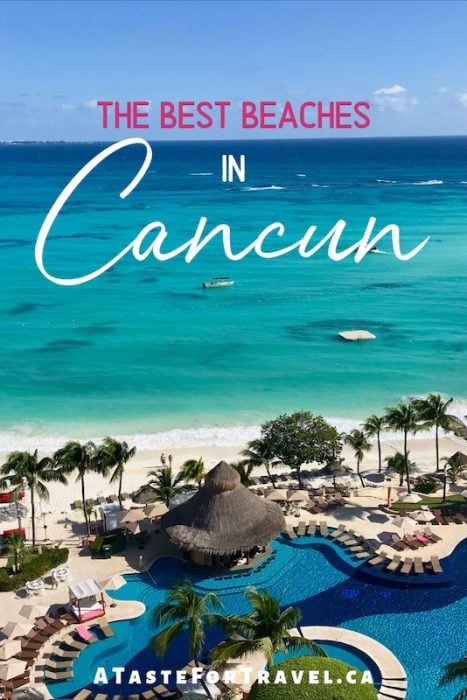 10 Amazing Things to Do in Mazunte, Mexico
Next Post: A Couple’s Guide to Romantic Positano, Italy