Pre-cooking the shrimp is the best way to avoid the potential of contracting a seafood borne illness from consuming raw seafood.

One of the most popular foods to enjoy during a day at the beach or casual lunch, is ceviche de camarón or shrimp ceviche chapin (chapin is slang for Guatemalan!).

Authentic shrimp ceviche is a seafood dish made from fresh raw seafood cured in lime juice and mixed with chopped onions, cilantro, tomatoes and seasonings. In Guatemala and Mexico it’s often served with saltines or tostadas with a bottle of hot sauce on the side.

Much like Salpicon de Pollo (Chilled Chicken, Radish and Mint Salad) and chojin, ceviche is a light and refreshing dish perfect for a hot day. However, some people don’t want to eat raw seafood.

This recipe for Ceviche Guatemalteco or Guatemalan ceviche can be the perfect solution because it’s prepared with shrimp cooked by heat, a process that destroys potential harmful bacteria.

Should you worry about getting sick from eating shrimp ceviche?

A purist might argue that authentic shrimp ceviche is, by definition  shrimp “cooked” in lime juice. However there are many reasons why people choose to eat shrimp that’s been cooked with heat prior to being combined with the lime juice.

Many restaurant menus caution against eating raw fish of any kind, especially for people with depressed immune systems, pregnant women, children and the elderly.

The reason for this is that while raw shrimp appears to be “cooked”  when it changes colour after being marinated in lime juice, some types of harmful bacteria are only destroyed by high temperatures.

The solution to making seafood safe for consumption is to precook the shrimp.

If you’ve ever gone through a bout of food poisoning from contaminated ceviche de camaron or other street food, you don’t want to take any chances on getting it again.

A study by the University of Guadalajara indicated up to 14.3% of samples of ceviche collected from street vendors and small restaurants in Guadalajara, Mexico were unsafe. They tested positive for Vibrio cholera,  a seafood-borne pathogen that causes a gastrointestinal illness that can be fatal.

While Vibrio cholera cannot exist in an environment that has a pH of less than 4.5, marinating shrimp  in lime juice (pH of between 2 and 2.5) should take care of it. However, the operative word is “should”.

Shrimp definitely looks cooks after it marinates in lime juice doesn’t it?  But appearances can be deceiving. Denaturation is the name of the chemical process that happens when a protein is altered through heat or acidity.

With seafood ceviche, acidic lime juice rearranges the chains of amino acids in the same way an oven or cooktop pan does. Yet those changes are only structural. Although the seafood protein structure has been altered,  it hasn’t been “cooked” in a way that destroys harmful bacteria.

And Vibrio cholera isn’t the only potential risk. Many government agencies report seafood samples contaminated with salmonella, E. coli and listeria. In Asia, the government of Hong Kong   now recommends patrons check whether premises have a FEHD licence before eating sashimi.

How to Avoid Bacteria in Raw Shrimp and Seafood

As with virtually every type of food,  it’s important to handle shrimp and other seafood safely in order to reduce the risk of foodborne illness.

The FDA has prepared a Guide to Fresh and Frozen Seafood that offers several helpful tips about storing, preparing and serving fresh shrimp and seafood.

They note some species can contain parasites and that freezing will kill any parasites that may be present. So, frozen shrimp can be a great option for making Guatemalan ceviche.

Note that freezing doesn’t kill all harmful microorganisms. That’s why the safest route is to cook your seafood.

While it’s worth noting the above precautions, I’ve personally eaten shrimp and fish ceviche in Mexico while working on Lonely Planet’s Mexico: From the Source cookbook and never once got sick.

I also ate raw fish in  Poisson Cru in French Polynesia  without any problems. Ceviche is one of my absolute favourite dishes to eat during a beach vacation or at home.

How to Make Guatemalan Ceviche Step by Step

Begin by peeling and deveining the shrimp. Then cook it in the microwave for 3-5 minutes, depending on the size of the shrimp. Cook in small batches until it is pink in colour.

Save the liquid to use in the tomato mixture you’ll add later. Allow it to cool.

While cooking the shrimp, dice fresh tomatoes, red or mild white onions and celery into small pieces. Do the chopping by hand as a food processor makes the tomatoes too mushy.

In Guatemala, ceviche is often made by two or more people, so the chopping process goes quickly. Once the shrimp has been cooked and cooled to room temperature, chop it into smaller pieces.

The pieces should be larger than the tomatoes and other vegetables.

Chill the shrimp ceviche de cameron in the refrigerator for a few hours and then serve with saltines, a hot sauce  such as Picamas Hot Sauce from Guatemala and avocado. That’s it!

How to Store and Serve Ceviche 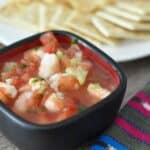 Pulique: A Ceremonial Chicken from A Mayan Cooking Class in Guatemala 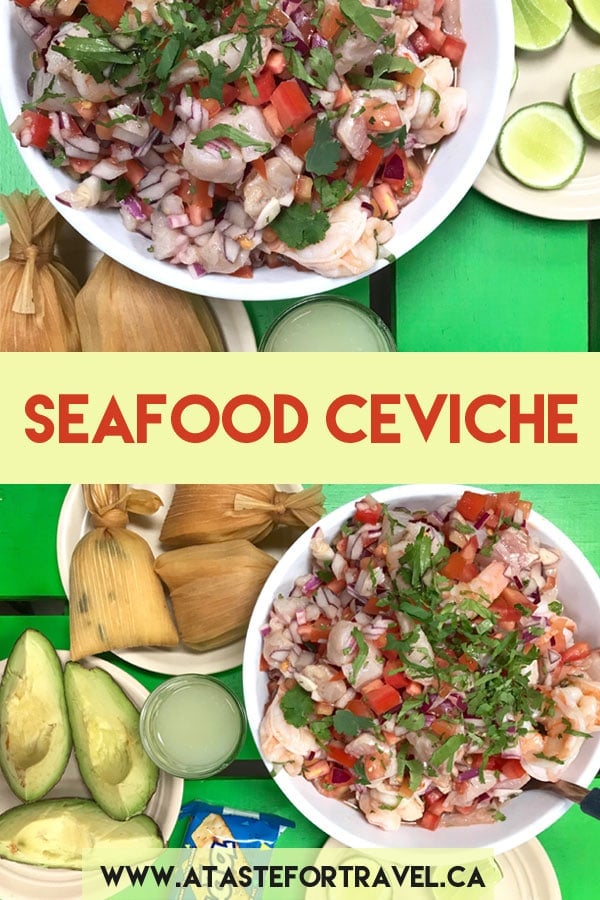 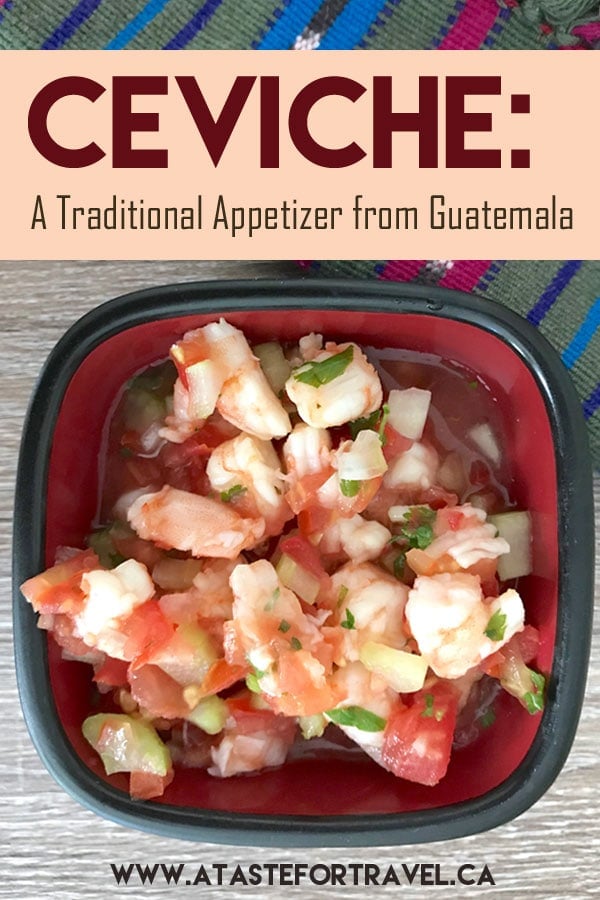 Sip Moonshine on a ‘Temperance and Temptation’ Getaway in York
Next Post: A Guide to the Best Things to Do in San Miguel de Allende