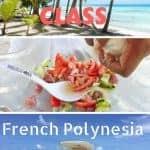 I first discovered this traditional French Polynesia dish while island-hopping through the South Pacific. I sampled versions of poisson cru — known as ia ota in Tahitian and Oka i’a in Samoa — in home kitchens and restaurants from Bora Bora to Tikehau and can say that this is the very best poisson cru recipe around!

Much like Latin ceviche, it takes just minutes to prepare!

My immersion into French Polynesian cuisine took place at a cooking class set on a tiny coral atoll near Tikehau, 350 km northeast of Tahiti.

The Tuamotu archipelago is dubbed Tahiti’s “strand of pearls” and is a string of 77 stunning islands and atolls strewn across the South Pacific.

Our base was the Tikehau Pearl Beach Resort, a luxury resort set on its own motu (tiny island) tucked within a wild coconut grove and surrounded by pink sand beaches.

“The lagoon surrounding this island is one of French Polynesia’s richest in marine life,” said Anne Tran-Thang, the resort’s general manager, as we walked across the wooden pathways suspended above the shallow blue waters.

Peering down, I could see brain coral as large as a submerged VW Beetle and a ring of brilliant Bénitier coral as bright as a sapphire necklace. And a lot of unusual marine life!

Donning a snorkel mask and armed with my Fujifilm FinePix XP80 Waterproof Digital Camera, I stepped into the crystalline waters and within minutes was welcomed by schools of sergeant majors, a bright blue parrotfish and a titan fish seemingly intent on lifting its head out of the water.

I later learned that titan fish can be quite territorial and aggressive but this one seemed ultra friendly.

The next morning it was time for a private cooking class on an even more remote island. We travelled across the endless expanse of the Pacific to a speck of sand ringed by coral and dotted with spiky Pandanus shrubs.

Our local guide Chef Bachou Raufau toted the provisions to a shady spot and built a fire to grill the red snapper. While it grilled, he demonstrated how to handcraft serving trays out of palm.

“Weaving is still very much a tradition among the Mamas of our village,” he explained, as he deftly wove  leaves into sturdy utensils.

Then we learned how to make Tahitian-style Poisson Cru a traditional dish of raw tuna marinated in lime juice and coconut milk that’s similar to Latin ceviche. Known as ia ota in Tahitian, it was the perfect recipe to learn as it’s considered the national dish of Tahiti and the islands of French Polynesia.

Is Poisson Cru Tahitienne a Fish Salad or a Ceviche?

Although I originally thought Poisson Cru was basically a Tahitian-version of ceviche, I quickly discovered that there are important differences.

Poisson Cru is also different from Latin ceviche in the type of fish used. The best fish to use for Poisson Cru Tahitienne is tuna.  A flaky fish will disintegrate and quickly turn mushy. Oily fish such as mackerel won’t provide the same delicate flavour.

“For us, shark, turtle and eel are sacred, so we don’t eat them, “ said Bachou our chef as he chopped a slab of tuna into chunks on his cutting board.

The fish is also marinated very briefly rather than marinated for a long period of time. The addition of coconut milk is also an important step in making Poisson Cru Tahitienne.

“To get the freshest miti haari or coconut milk, you grate a ripe coconut and then squeeze the milk out through a cloth,” he explained.

The Poisson Cru Tahitienne we made that day was velvety, with the tender cubes of tuna tasting as fresh as the sea. The coconut milk added a touch of sweetness while the crunch of cucumber and red tomato made it an especially memorable dish.

It was followed by grilled red snapper, a hearty main course with a smoky flavour and crispy skin, infused by the charcoal of the open fire.

We enjoyed it all at a table set in the shallow water’s edge where sleek lemon and black tip sharks glided past, hoping for a handout. The ever-fearless Sue Campbell took the video below of the dozens of sharks circling around our table.

I watched my table scraps get snapped up by a flurry of snapping jaws and decide to lift my toes out of the water; for while Polynesian tastes and traditions might preclude eating shark, the feeling might not be reciprocal.

Although this recipe for E’ia ota is very easy, there are a few tips and secrets to success when making any marinated raw fish recipe. For the best marinated fish Tahitian island style, here’s what you need to know: 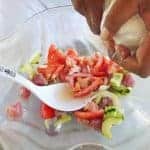 If you’re planning a trip to French Polynesia, be sure to check out this complete guide to choosing a luxury resort on Bora Bora so you can compare prices, location and special features of each of the resorts.

Official Tahiti Tourism: Get travel advice, maps and information on travel between the islands.

Le Taha’a Island Resort and Spa These are the overwater bungalows of your dreams complete with glass-bottomed floor and private decks with steps into clear waters.

Tikehau Pearl Beach Resort  Although it might be tempting to opt for one of the overwater bungalows, your best bet is one of the beach bungalows if you’re looking for a luxurious stay. They come with AC, an indoor/outdoor washroom and a private deck with a dreamy hammock.

Hilton LAX: A great option for travellers who want to unwind during their LAX layover, is a day pass to the upscale Hilton Los Angeles Airport Hotel, near the airport. www.losangelesairport.hilton.com

If You Enjoyed This Raw Fish and Coconut Recipe, You’ll Love These Posts: 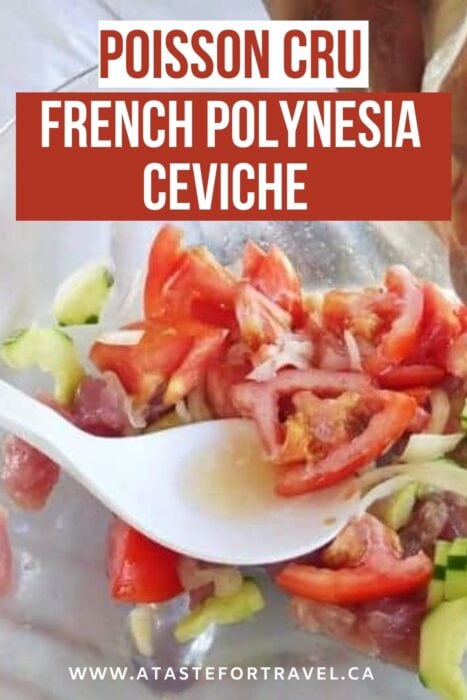 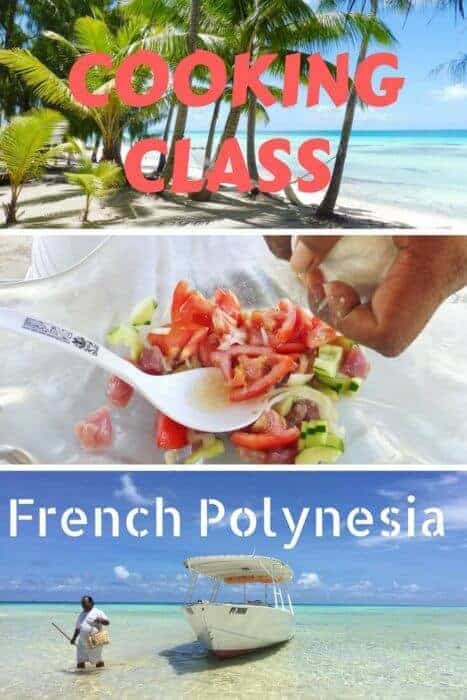 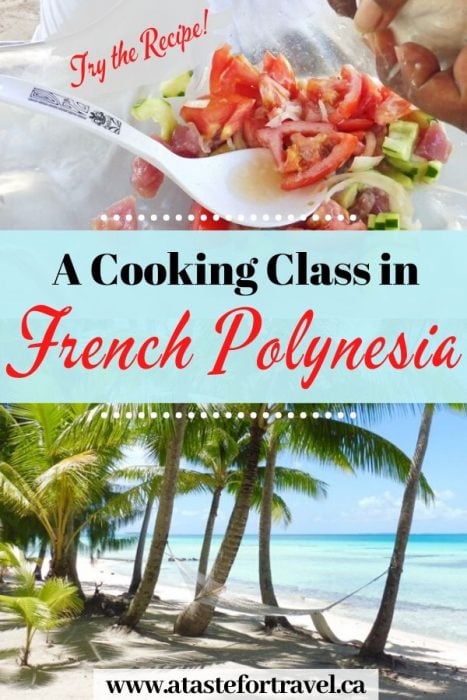