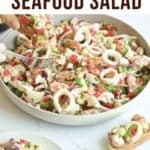 This easy salpicón de mariscos (seafood salad) appetizer is made with a combination of fresh seafood, crisp bell peppers, cucumber, slivers of onion and the BEST lime vinaigrette!

It’s delicious to serve at tapas parties, summer potlucks or as a light lunch.

Why We Love This Seafood Appetizer

What is Salpicón de Mariscos?

Salpicón is a technique of finely chopping cooked ingredients before mixing them with a vinaigrette. The name salpicón actually comes from the Spanish verb salpicar which means “to sprinkle” and describes chopping ingredients finely.

Salpicon de mariscos is a specialty of several fishing communities in Spain. I first came across it in Galicia where the dish often featured glistening pulpo (octopus) plucked fresh from the waters off the coast’s rocky shores.

It’s also popular in Andalusia where the culinary technique of marinating meat in vinegar has its roots in Arabic cuisine.

The Old World method of preserving food by pickling originated prior to the invention of refrigeration.

Combining a protein (seafood, chicken or beef) with vegetables, herbs and spices in a tart, pickled sauce not only helped preserve a food but added a boost of flavour.

The Moors ruled much of Spain for 800 years and their influence migrated to Spain’s colonies.

That’s why today you’ll find salpicón de mariscos (and other marinated dishes) in the traditional cuisines of Latin America, the Philippines and Caribbean.

What are the Main Types of Salpicón?

While all versions of salpicón are popular dishes to serve when entertaining there are different types of meat you can use. They’re all delicious!

Salpicón de Res (Beef): Is usually made with the beef leftover from caldo de res and includes tomatoes, mint and radishes.

Salpicón de Pollo (Chicken): This shredded chicken combo is often topped with crema and avocado and served over tostadas.

Salpicon de Mariscos (Seafood): Usually served in tapas-sized portions in small dishes or glasses. The ingredients are sourced fresh and are expensive so it’s more of a special occasion dish.

This recipe for Salpicón de Mariscos reflects how it’s traditionally prepared in Latin America especially Guatemala, the Yucatan of Mexico, Puerto Rico and the Dominican Republic.

I prefer this Latin American version as the simple vinagreta allows the exquisite sweet flavours of fresh seafood to shine.

Here are the highlights of this recipe. You’ll find the full ingredient list and quantities in the recipe card (please scroll down).

How to Make Seafood Salpicón

This is a very easy salpicón recipe. But there are a few tips that will make it taste extra special, so let’s go through the recipe step by step.

Pro Tip: You’ll be poaching the batches of seafood separately in the water with salt and onion. Cooking them in individual batches helps preserve the flavour of each type of seafood. Repeat the process for each mixture/batch.

Pro Tip: It’s also possible to prepare the salad dressing in advance. Store in the refrigerator until ready to use.

If you love the flavours of this dish you might also enjoy these other Spanish-inspired dishes, Spanish Chicken and Chorizo Stew and Bacalao a la Vizcaina (salt cod stew).

Can I use one type of seafood rather than a combination?

Yes, you can! In Galicia, Spain seafood cocktails often feature just the catch of the day. And in Atlantic Canada, you can make a delicious salpicón de langosta during lobster season. Even scallops and fresh crab are good options for a salpicón.

Is seafood salad good for you?

A seafood salad is generally a healthier choice than a deep-fried, meat or cheese appetizer as it’s lower in calories, saturated fats and sodium. Fish is especially high in beneficial omega-3 fatty acids.

What are some examples of cold tapas?

Other Fish and Seafood Appetizers to Try

Love this recipe? Please leave a 5-star 🌟🌟🌟🌟🌟rating in the recipe card below & a comment further down if you REALLY like it. Thanks!