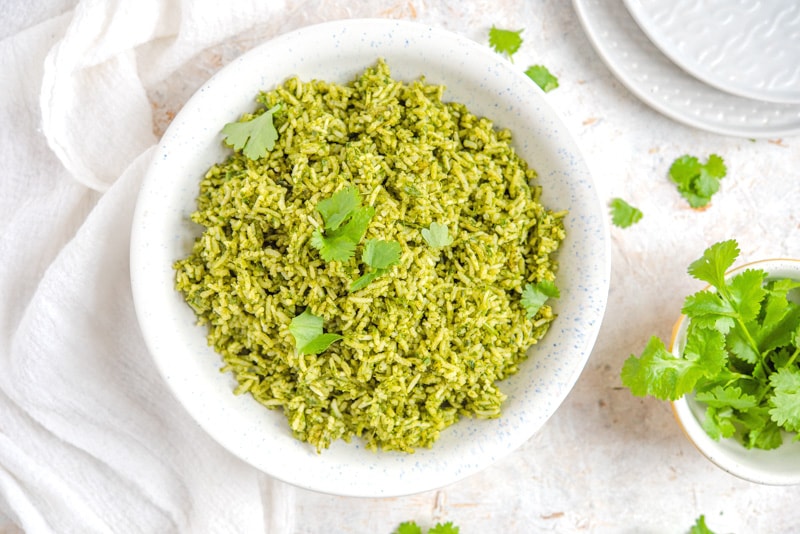 We may earn income from affiliate advertising links in this post.

This light and fluffy arroz verde or Mexican green rice is perfect with dishes such as carnitas, enchiladas, chicken tacos and grilled meats. Packed with fresh spinach, it makes a healthy side dish that’s vegetarian, vegan and gluten-free.

This spinach rice pilaf is so versatile, you can even enjoy it for breakfast with fried eggs, salsa ranchera and black beans!

Looking for an easy-to-prepare crowd-pleaser that you can feel good about serving? This arroz verde recipe features just five main ingredients and makes a delicious side dish that’s much lower in sodium than boxed rice mixes but big on flavour, vitamins and fibre.

Arroz verde is a dish that goes on giving as it’s tasty as leftovers ( tuck a spoonful of green rice inside a tortilla with some black beans) or enjoy it for breakfast with a fried egg and  salsa ranchera. It heats up in a flash in the microwave so it can easily be made a day in advance.

Best of all, incorporating fresh greens into your rice is an easy way to add vitamins, minerals and fiber to your diet. Plus, it’s vegan, vegetarian and gluten-free!

How to Wash Fresh Spinach Prior to Cooking

Data from the Centers for Disease Control and Prevention suggest that leafy vegetables such as spinach and lettuce are prone to food borne illnesses such as E. coli and other types of contamination.

While cooking with heat destroys dangerous bacteria such as E. coli, it’s worth knowing how to properly wash fresh spinach so you can avoid getting a mouthful of sand, grit (or even insects) in your spoonful of rice pilaf.

Unlike placing fresh spinach in a colander and running water over it (which bruises the spinach and makes it soggy), this method keeps the spinach crisp and also gets rid of all the dirt.

Here are the steps to follow to when washing fresh spinach prior to cooking. You can also use this method for cleaning swiss chard and other leafy greens:

How to Roast a Poblano Pepper

Although poblano peppers are becoming more mainstream and popular, they can still be difficult to find in supermarkets outside of Latin America. So if you do spot some, it’s worth buying several, charring them and storing them in the freezer. Store them in the freezer for up to three months and enjoy their delicious, smoky flavour whenever you like.

To roast peppers in your oven, place whole peppers on an oiled baking sheet and broil for 10 minutes. Then flip the peppers and broil on the other side for an additional 10 minutes or until skin is blackened. Another option is to char them on the gas stove top or in a cast iron frying pan.

Once the peppers are charred, seal them in a plastic bag or on a plate covered in plastic wrap for about 5 minutes to loosen the skin. Then remove the papery outer skin, pull off the stem from the flesh and slit the chile up the side.

Brush or scrape out the seeds and pull out the long veins. They’re now ready to use in this recipe for arroz verde.

This easy recipe for Mexican arroz verde is a much healthier alternative to the boxed rice mixes available in the supermarket. Not only is it much lower in sodium than the rice mixes and flavour packages full of additives, but the fresh spinach gives it an extra boost of vitamins and minerals. And it takes just 30 minutes to make!

With just five main ingredients, it’s sure to become one of your favourite go-to recipes.

1. Once your spinach is washed and your poblano pepper charred (see above instructions) roughly chop the remaining vegetables.

2. In a food processor, puree the spinach, cilantro, green onion, and one cup of water. The puree should equal about 2 cups when done.

3. Next, prepare the rice. While there are many varieties of rice available, the best rice to use for a rice pilaf is American long grain white rice. Short and medium grain rice is too moist and won’t produce a light, fluffy rice with separate, distinct grains when cooked.

This article on Different Types of Rice explains more about the varieties of rice and their uses, flavours and textures.

5. Add the 2 cups of spinach puree, 1 cup of water and salt to the rice. Bring the mixture to a boil, then cover with a tight-fitting lid, reduce the heat to low, and simmer for 15 minutes.

6. Fluff the arroz verde lightly with a fork, and serve.

Tips and Variations of Arroz Verde 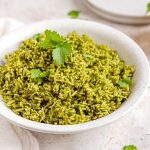 This light and fluffy rice pilaf is popular with Mexican food or grilled meats. Packed with fresh spinach, it makes a healthy side dish that’s vegetarian and gluten-free. It’s so versatile, you can also enjoy it for breakfast with eggs and black beans. 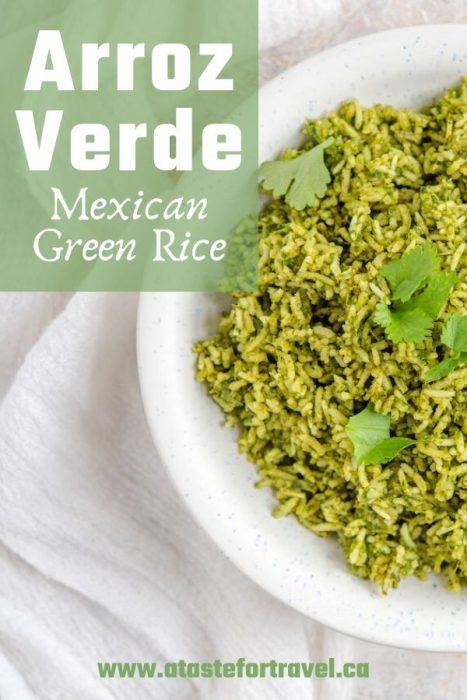 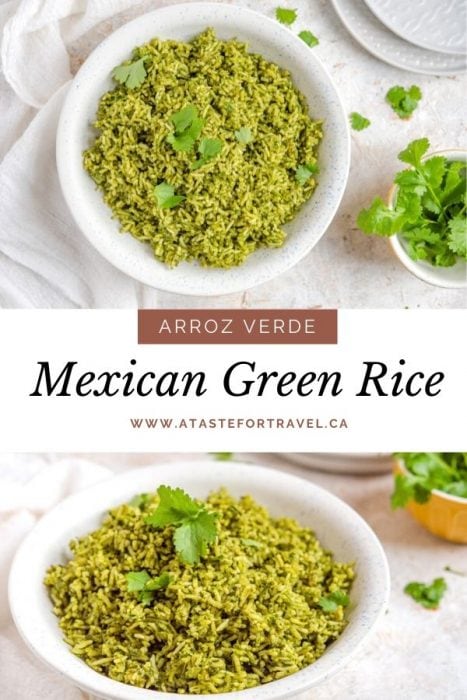 Dividing her time between Toronto, Mexico and Guatemala (or the nearest tropical beach), Michele Peterson is an award-winning writer, blogger, editor and publisher who specializes in travel, cuisine and luxury lifestyles. Visit her website at www.michelepeterson.com

How to Find the Best Paella in Valencia
Next Post: 15 Amazing Things to Do in Rome at Night

Get the free A Taste for Travel newsletter!

Dividing her time between Canada and Mexico, publisher Michele Peterson’s award-winning work has appeared in Lonely Planet’s cookbook Mexico: From the Source , National Geographic Traveler, Fodor’s Oaxaca and more than 100 other publications.

At A Taste for Travel — along with a team of expert travel writers and photographers — she  helps readers plan their own vacations and make delicious global recipes at home.