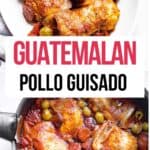 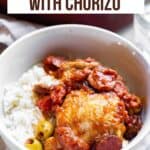 Why We Love this Spanish Chicken and Chorizo Stew 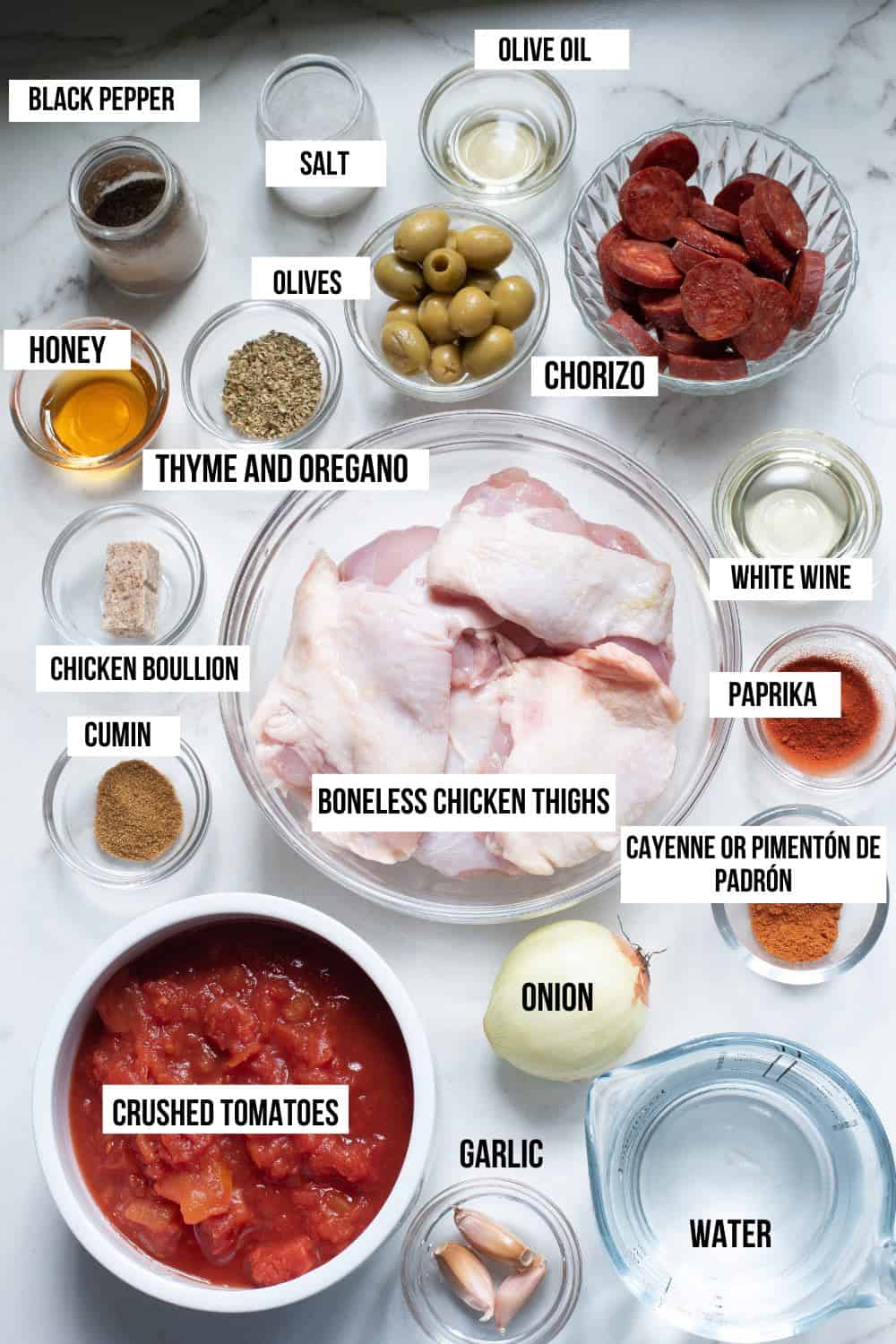 Chicken Thighs: Chicken thighs are the most flavourful cut of chicken to use. However, if you prefer you can substitute chicken breasts if you cut them into two or three pieces.

Spanish paprika: Spanish paprika or pimentón (either sweet or hot) is a smoked pepper that’s an essential ingredient in  Spanish cooking. It adds a smoky, sultry flavour that really makes this dish.

White Wine: Adds depth and acidity. A Spanish albariño wine is ideal as it will also contribute minerality and fruit notes. If you don’t want to use white wine, you can substitute more chicken or vegetable broth in equal parts. If using store-bought broth, go for a low-sodium version (so your dish doesn’t end up too salty) and serve with a wedge of lemon or lime to add  acidity.

Dried Cumin, Oregano, Thyme and Cayenne: Dried (or fresh herbs) add flavour and substitute for prepackaged sazon mixes. The original recipe for stewed Spanish chicken calls for pimentón de padrón but this can be difficult to source in North America so I’ve substituted cayenne.

Onion and garlic: Always use North American, South American or Spanish garlic rather than Chinese as the flavour is more subtle and less sharp.

Pitted Green Olives: Be sure to use pitted olives, preferably not the ones stuffed with pimento.

Chicken Stock or Bouillon:  For the best flavour, it’s best to use homemade chicken stock. For example, if I poach chicken to make salpicón de pollo tostadas, I freeze the cooking liquid to use as stock.

But if you don’t have chicken stock on hand,  you can substitute chicken bouillon mixed with water. Opt for a brand with low sodium and no MSG or additives.

If you have excess chicken stock (from a can or boxed) I like to use it up in this recipe for Chicken Chipotle Slow Cooker Soup.

How to Make it Step by Step

Please scroll down to recipe card for complete method and ingredient measurements.

2. Heat a large braising pan with oil on medium heat. Brown the chorizo for about 2 minutes, stirring occasionally. Let the chorizo release a bit of juice and fat.

3. While the chorizo is browning, trim excess fat and loose skin from the boneless chicken thighs.

4. Add the chicken thighs, skin down to the pan and brown for about 2-3 minutes. When the skin is browned, flip and cook for another 2-3 minutes. Remove both the chorizo and chicken from the pan and set aside.

5. In the same pan, add the white wine and deglaze by scraping the browned bits with a wooden spoon.

6. Add the sliced and chopped onion and garlic.

7. Reduce the temperature to a medium-low heat and cook for a few minutes. Then add the thyme, oregano, paprika, cumin, cayenne pepper and salt.

8. Add chopped tomatoes, water mixed with bouillon powder (or chicken stock) to the pan. Bring to a low boil.

9. Transfer the chicken thighs (and their juices) back into the braising plan with the chorizo. Cover and bring to a boil and reduce to a simmer. Cook for 25 minutes or until tender.

10. Remove the cover, add honey, olives and freshly-ground black pepper. Add boiling water if sauce is too dry or remove lid and allow to cook to reduce sauce if needed. This will depend on how saucy the canned tomatoes are.

Cook until heated through.

Note: Nutritional values are created by an online calculator and are only estimates.

Swap out the chorizo for garbanzo beans. Just drain a can of garbanzo beans (or cook from scratch in advance), then add during the last 10 minutes of cooking until warmed.

In Guatemala, it’s typical to add peeled,  diced and cooked potatoes and often carrots in this chicken stew. You could also add fresh green beans if they’re in season, making it similar to the popular Guatemalan dish known as hilachas, stewed shredded beef in tomato sauce.

Cooked artichoke hearts can also be included for a special occasion.  Drain the canned artichokes, then nestle them in the tomato sauce, cover and allow them to warm in the sauce during the last 10 minutes of cooking.

To make a thicker stew and boost the fibre and nutrition, increase the temperature in the final 10 minutes of cooking. Add 1/2 cup of rinsed, split red lentils and simmer until tender.

The cooked lentils should be quite soft . If the lentils are old they’ll take longer. You may need to add a little more boiling water if necessary.

If you like this recipe, you might also enjoy this Basque recipe for Bacalao a la Vizcaína as it also features a spicy tomato sauce and olives but features cod rather than chicken. 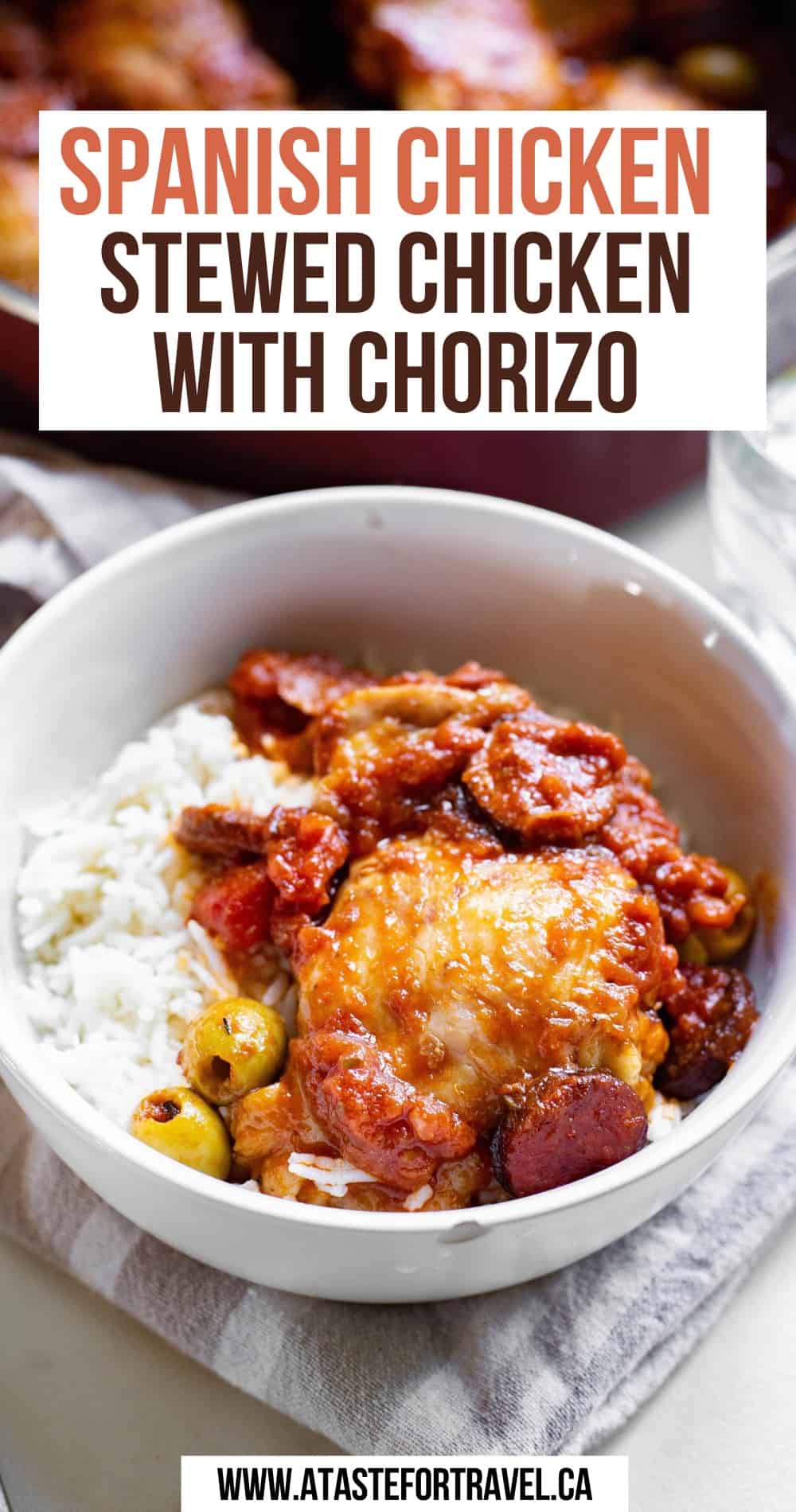 A Food Lovers’ Guide to a Holland America Canada & New England Cruise
Next Post: 10 Top Halifax Food Experiences (and Where to Find Them)