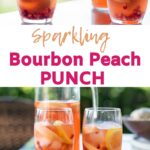 This sparkling bourbon peach punch features sweet bourbon mixed with ginger beer and a bounty of fresh fruit including peaches and pomegranate. It’s a refreshing cooler that’s ideal for a hot summer afternoon, a sophisticated evening party or special brunch.

It’s the perfect drink recipe to showcase the juicy sweetness of fresh peaches during harvest season.

Why bourbon for this peach and ginger punch? A road trip along the Kentucky Bourbon Trail made me into a big bourbon fan. Whether it’s sipped straight, enjoyed over waffles or used as a glaze for grilled meats, the sweet and spicy flavours of bourbon make it both versatile and delicious.

So, when it came time to think of a grown-up summer punch that wasn’t too sweet, the first booze that came to mind was bourbon.

Given I’m also a fan of Bermuda’s favourite cocktail, the Dark n’ Stormy (rum and ginger beer) and Caribbean ginger beers (often homemade), bourbon and ginger beer was a natural pairing for a party-ready punch!

This recipe uses just six main ingredients so it’s super-easy to whip up. That’s means you can spend more time outdoors enjoying the summer rather than in the kitchen. Here’s what you’ll need (see the recipe card for quantities and method).

If you have extra fresh peaches, use them up in our recipes for Grilled Halibut with Peach Salsa or Peach Jalapeño Salsa. They’re quick and easy recipes that come together in around 15 minutes!

This Sparkling Bourbon Peach Punch recipe calls for ginger beer. It’s the secret ingredient that makes it a crowd pleaser. If you’re wondering if you can substitute ginger ale for ginger beer it’s worth understanding the differences between the two.

Although the two beverages have similarities — they’re both sweet, non-alcoholic and carbonated — they’re quite a bit different in the intensity of the ginger flavour.

For this recipe, I like to use Fever-Tree Ginger Beer, a light blend of three gingers from Nigeria, Cochin and the Ivory Coast with a unique depth of flavour and character.  Or, another good option is Grace Food’s Ginger Beer, a sweet ginger beer with slightly peppery notes.

If you’ve got leftover ginger beer after making this bourbon punch, try these recipes for Mango Pink Lemonade with Ginger Beer or Ginger Beer Mojitos.

The bright flavour of ginger beer also shines in this recipe for Slow Cooker Ginger Beer Barbecue Back Ribs.

The Best Type of Fresh Peaches to Use

In Ontario’s Niagara region where 80% of Canada’s peach production happens,  the peach season begins in early August.  This is when you’ll see fruits stands selling Niagara peaches, see baskets of local peaches in grocery stores and even be able to pick your own fruit at one of the fruit orchards.

There are three main types of peaches to choose. Freestone peaches feature flesh that easily pulls away from the pit, while the flesh of clingstone clings to the stone. Semi-freestone fall somewhere in between.

The Best Bourbon to Use for Bourbon Punch

Bourbon lovers have a large selection of great brands to choose from. While I love exploring unusual and experimental spirits (my latest swoon is a smoky Scottish Whisky – Tomatin’s Cù Bòcan from the Scottish Highlands), it’s fair to say some of your guests might be bourbon newbies.

If so, your best bet for a beginner bourbon is a smooth, sweet brand. By law, all bourbons must be made of a grain mixture that’s at least 51% corn.

It’s the distillation process, ageing and mix of grains in the mash makes a difference in the flavour of each brand, contributing  rich and complex notes of cinnamon, vanilla, caramel and even tobacco.

Here are some great choices of bourbon brands for beginners:

1. Roll four lemons on the counter top with your palm to help release the juices from the lemons.  Cut each lemon in half and squeeze the lemons through a strainer into a bowl.

I like using the Zulay Lemon-Lime Manual Squeezer. It extracts the most amount of fresh juice with the least amount of effort.

2. Cut the peaches into thin slices and remove any mushy flesh or threads from around the pit. Sprinkle lemon juice on the peach slices to prevent them from turning brown if you’re doing  this  step in advance.

3. Slice the remaining lemon in rings (removing any seeds) and add in a pitcher with the peaches. Pour lemon juice, cane syrup (to add a hint of sweetness.), ginger beer, bourbon and water. Mix lightly with a long spoon.

4. Refrigerate for at least one hour or until well chilled.

5. Add pomegranate seeds and ice-cubes to the pitcher. Stir lightly and serve! 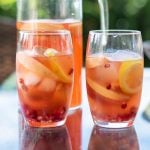 If You Enjoyed this Punch, Try these Other Summer Drinks 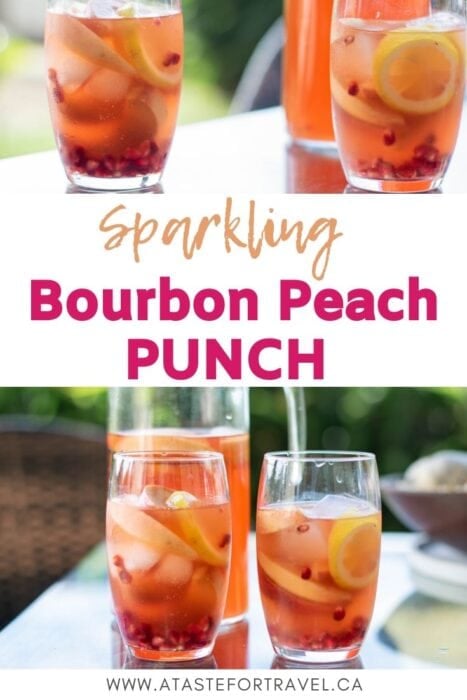 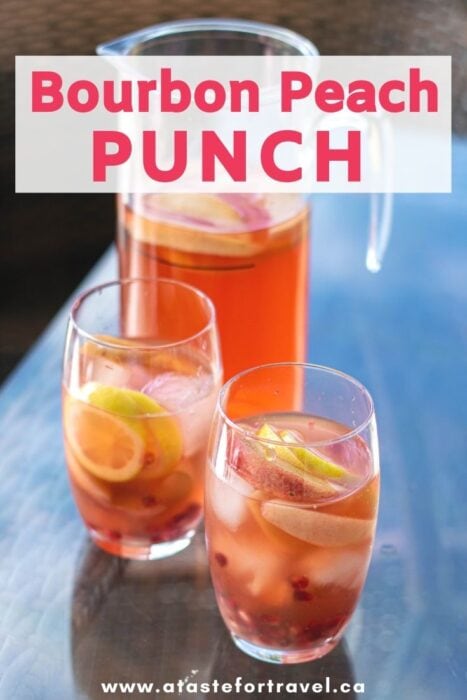