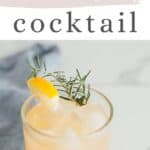 It’s delightfully crisp and herbaceous, which makes it the perfect not-too-sweet drink for spring through fall. Serve it with a light meal, on a sunny patio or as an after-dinner drink. 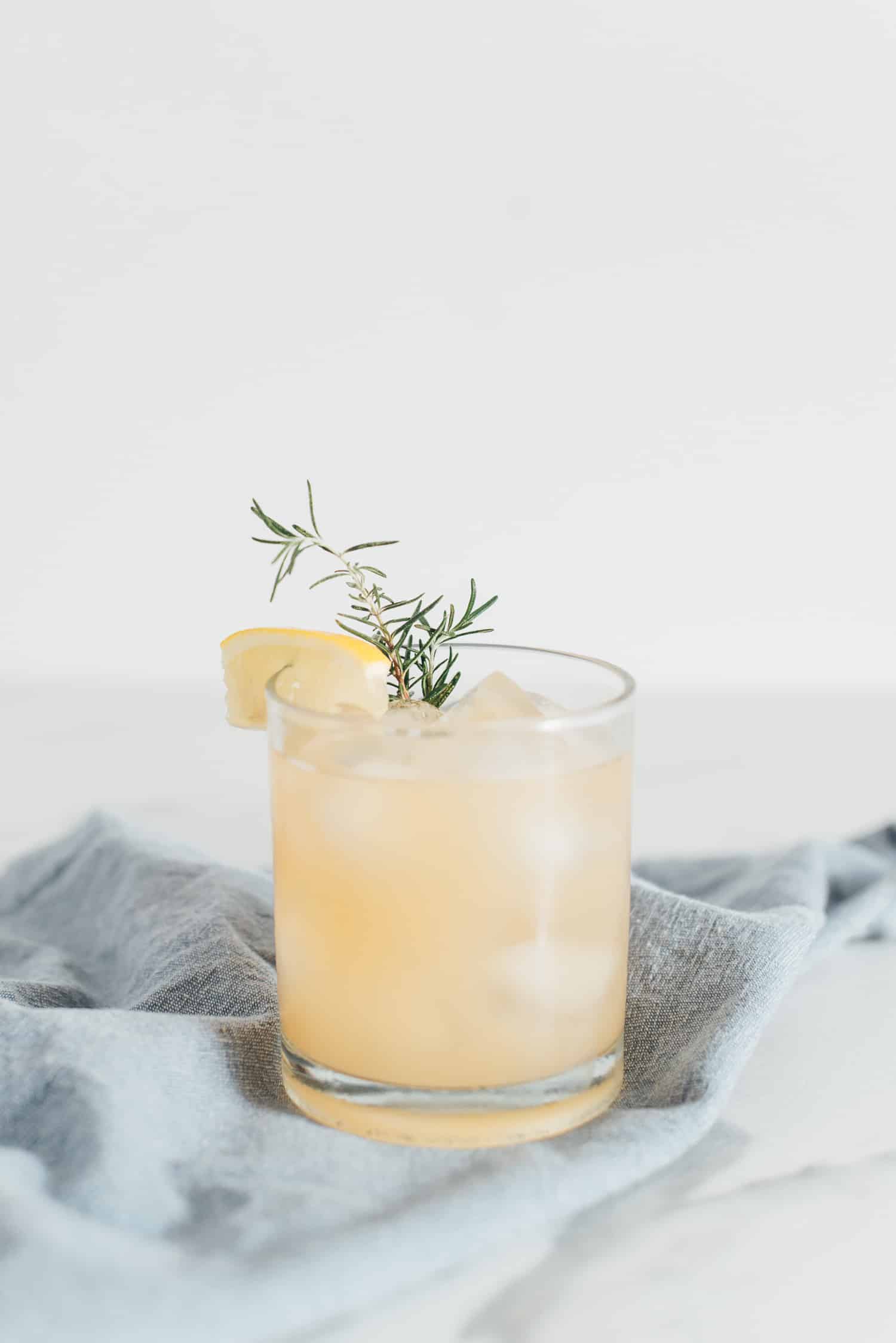 Go Fresh and Local with a Chamomile Cocktail

Chamomile has a history that dates back to the Neolithic era. It’s long been treasured for its soothing properties. Its flower extracts and oil are used in medicinal tinctures and aromatherapy throughout the world.

While chamomile flowers are most often enjoyed as a soothing hot tisane or even as an iced chamomile tea, its delicate earthy taste also works beautifully in cocktails.

Ever wondered what kind of alcohol goes with chamomile? It pairs exceptionally well with whiskies and bourbons, gin and vodka.

This particular cocktail is inspired by the whiskey and honey-infused Chamomile Bee Cocktail at the Millcroft Inn and Spa in Alton, Ontario.

In 2018, the historic property partnered with Toronto Bee Rescue and Ontario Honey Creations and installed 24 bee hives on their property.

They now craft several culinary creations from their own hives, including a selection of honey-infused cocktails. While the Millcroft Inn cocktail features Grand Marnier and Triple Sec liqueurs, I made a few adjustments to make it my own and a bit more locally-inspired. 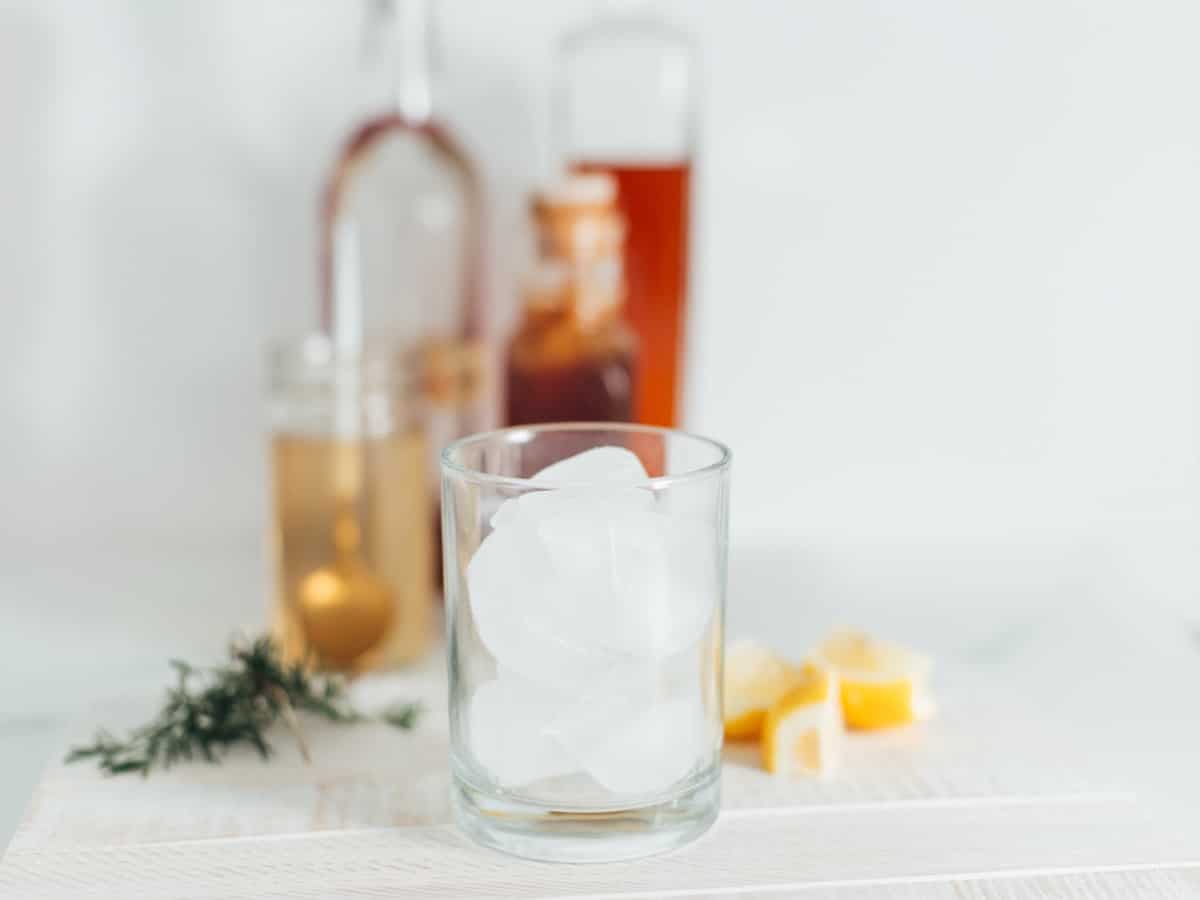 Rye Whiskey: This type of whiskey is peppery and spicy. It lends a wonderful note to this cocktail. Crown Royal, Wiser’s Triple Barrel Rye and Forty Creek Barrel Select Canadian Whisky are our favourite rye whiskies to use in this cocktail.

Honey Bourbon: Honey bourbon is a blend of honey liqueur and Kentucky bourbon whiskey. Its mellow sweetness complements the spiciness of the rye whiskey and provides a smoothness to the drink. We love honey bourbon in Bourbon Hot Toddies  for this same reason.

Jim Beam and Wild Turkey are the best known producers of honey bourbon.

Honey Simple Syrup:This sweet concoction of honey and water is simmered until it forms a syrup. It provides a splash of sweetness that counters the lemon juice and whiskey beautifully.

Clover, wildflower or dandelion honey are the best types of local honey to use in a chamomile cocktail. Buckwheat honey is wonderful (and nutritious) but its intense molasses and malty flavour can easily overwhelm the delicate taste of  chamomile. It can also alter the colour of the cocktail.

Chamomile Tea: A blend of dried chamomile flowers and water is steeped and then chilled. The taste of chamomile tea made from scratch has an intense herbaceous flavour with a faint aroma of fresh apples.

Rosemary: Using a sprig of fresh rosemary as a garnish adds an intense woodsy and evergreen flavour and aroma. It also looks beautiful!

Whisky vs Whiskey? One of the unique facts about whisky is that it can be spelled in different ways. Why are there two spellings of whisky? Both are correct!

Please scroll down to the recipe card for the exact quantities of ingredients and the full method. 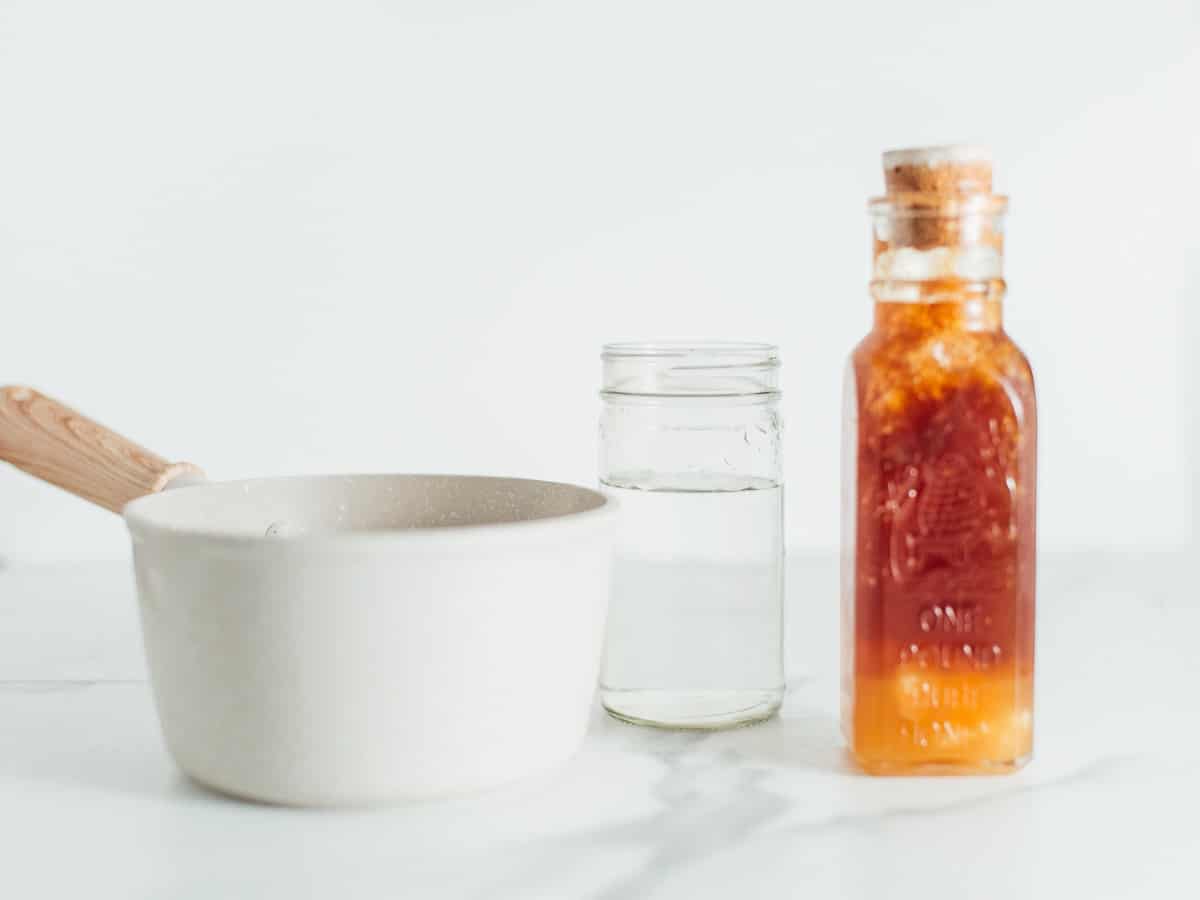 2. Heat and stir until the honey is dissolved. 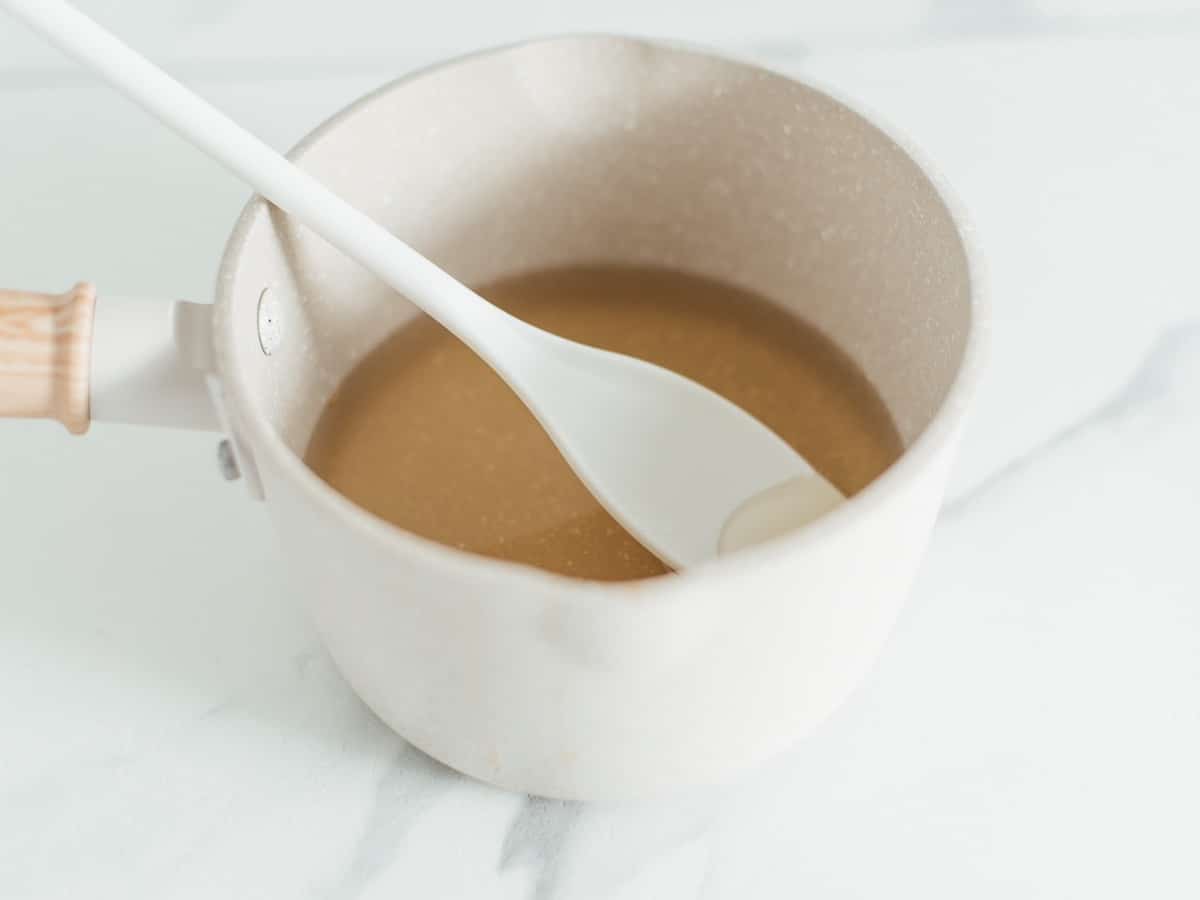 4. Pour into a glass, heatproof jar, and allow to cool. Honey syrup will keep, refrigerated for up to two weeks.

1. If you’re using fresh chamomile, remove the heads of the flowers from the stalk.

2. Bring filtered water to a boil, reduce to a simmer then remove it from the heat. Once the boiling has completely stopped and is at 100C, pour it over the dried or fresh chamomile flowers (or tea bags if you’re using). 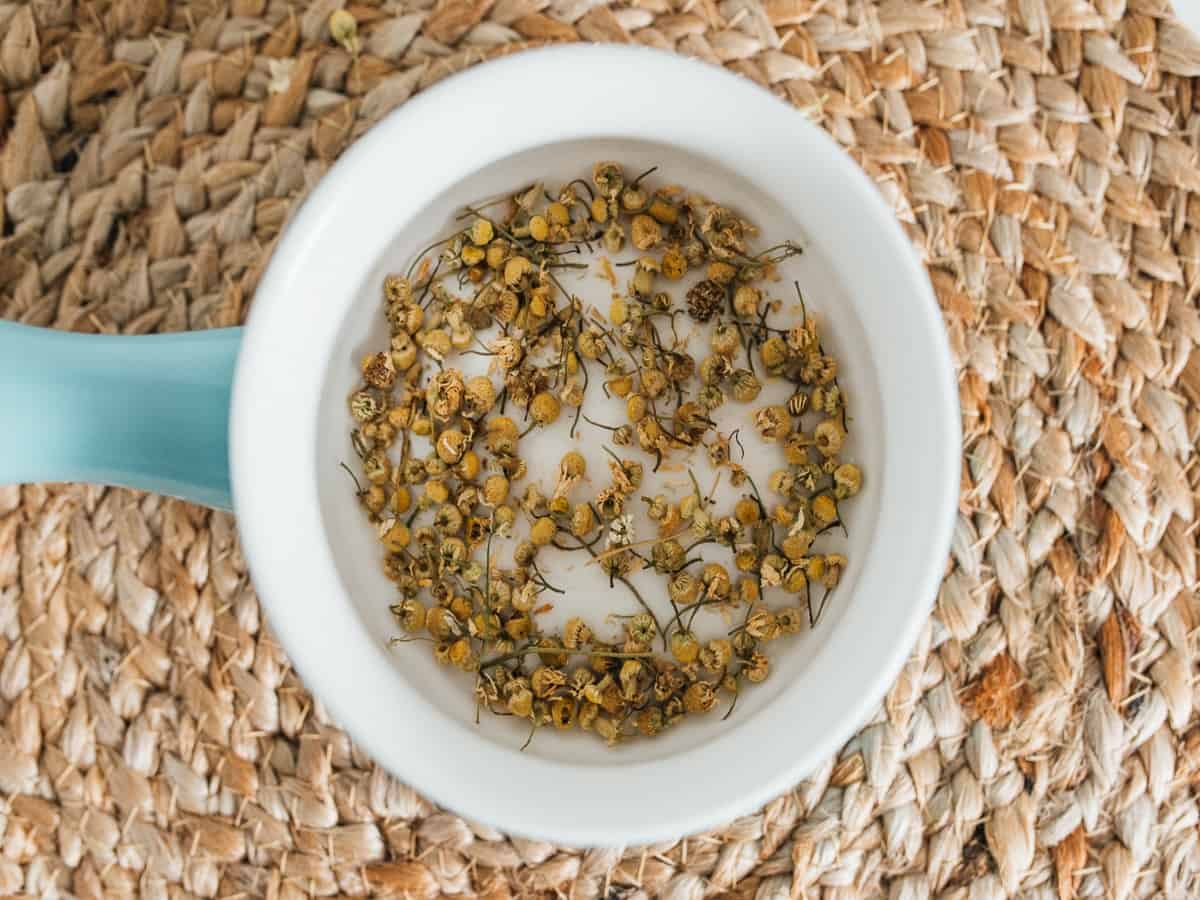 3. Allow it to steep for three minutes.

4. Strain into a glass, heatproof container and allow it to cool. 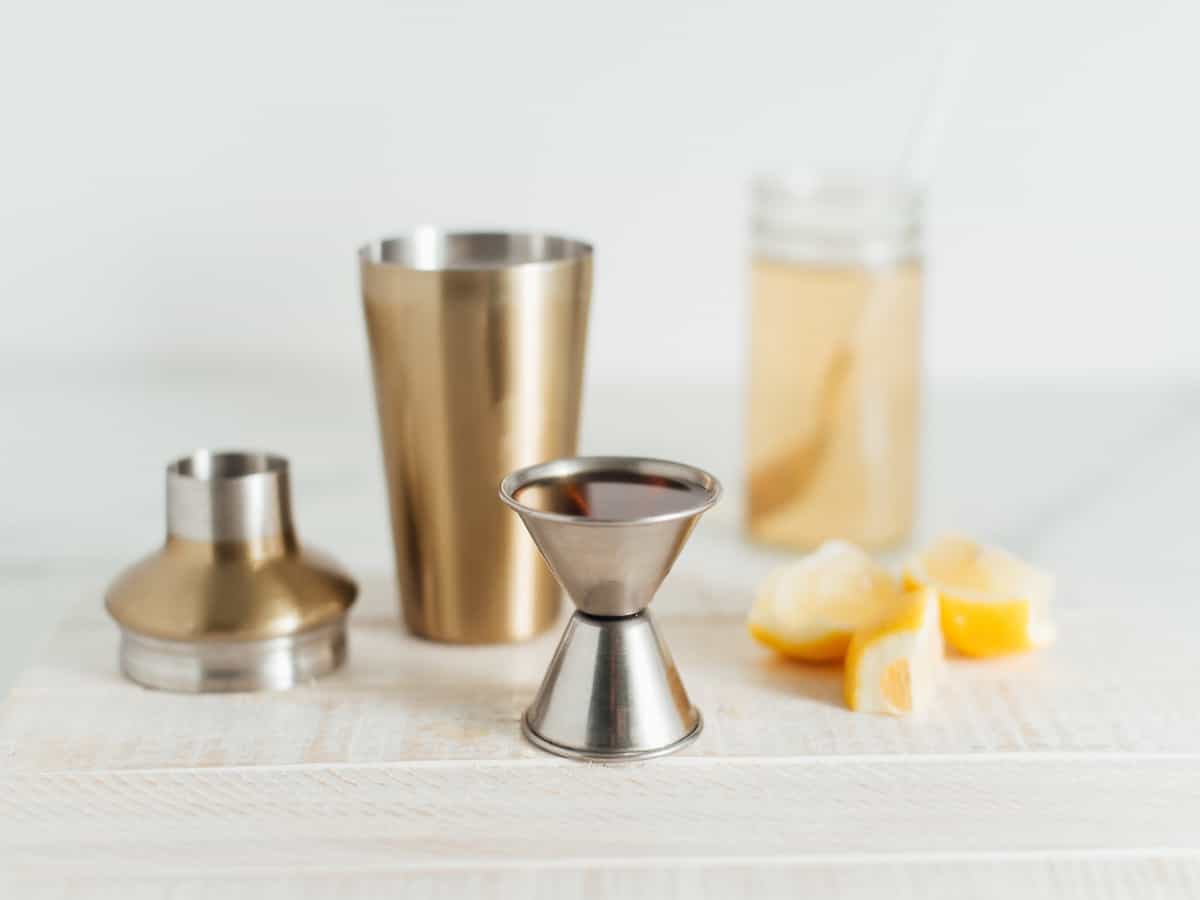 1. Pour the whiskey into a drink shaker with ice.

Pro tip: Why use a cocktail shaker? Shaken cocktails are cool. crisp and concentrated. Unless you’re going on a picnic, use a metal rather than plastic cocktail shaker as it doesn’t absorb odors and chills better. Fill the shaker with around five ice cubes. Use less ice if you’re making two cocktails so there’s more room in the shaker.

2. Squeeze in the lemon juice. 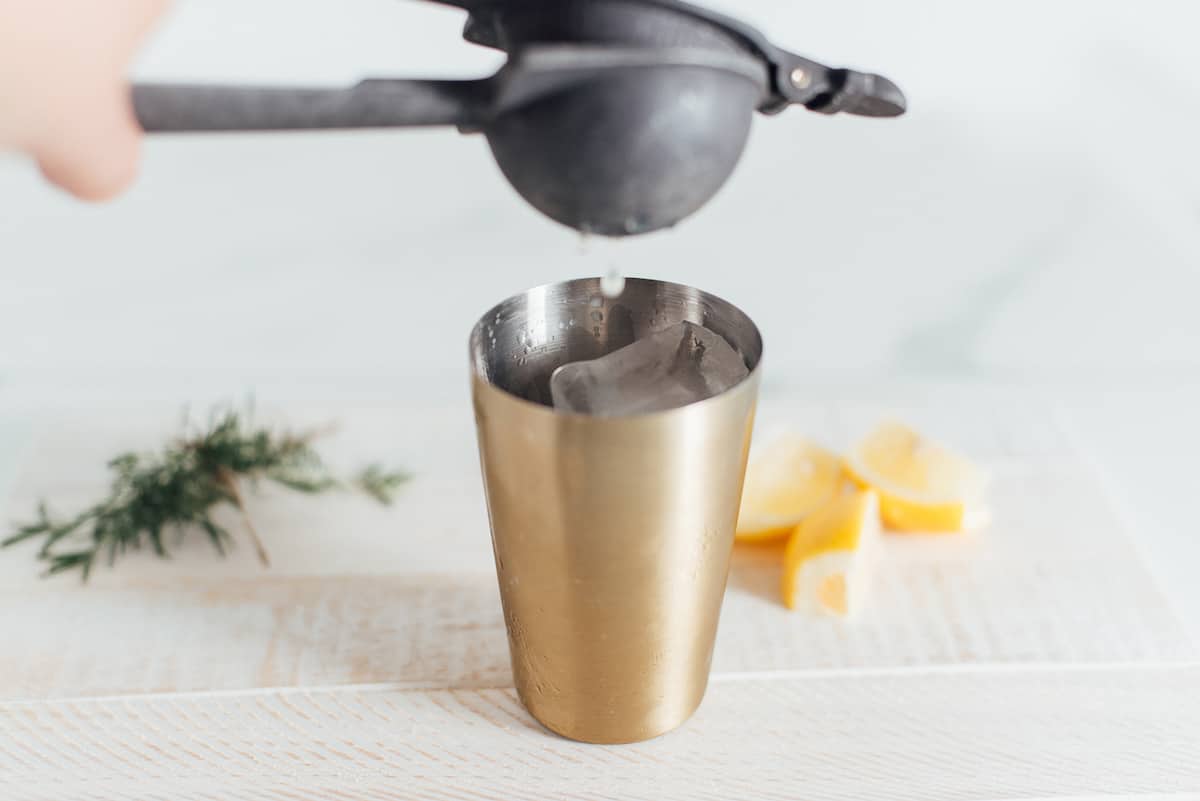 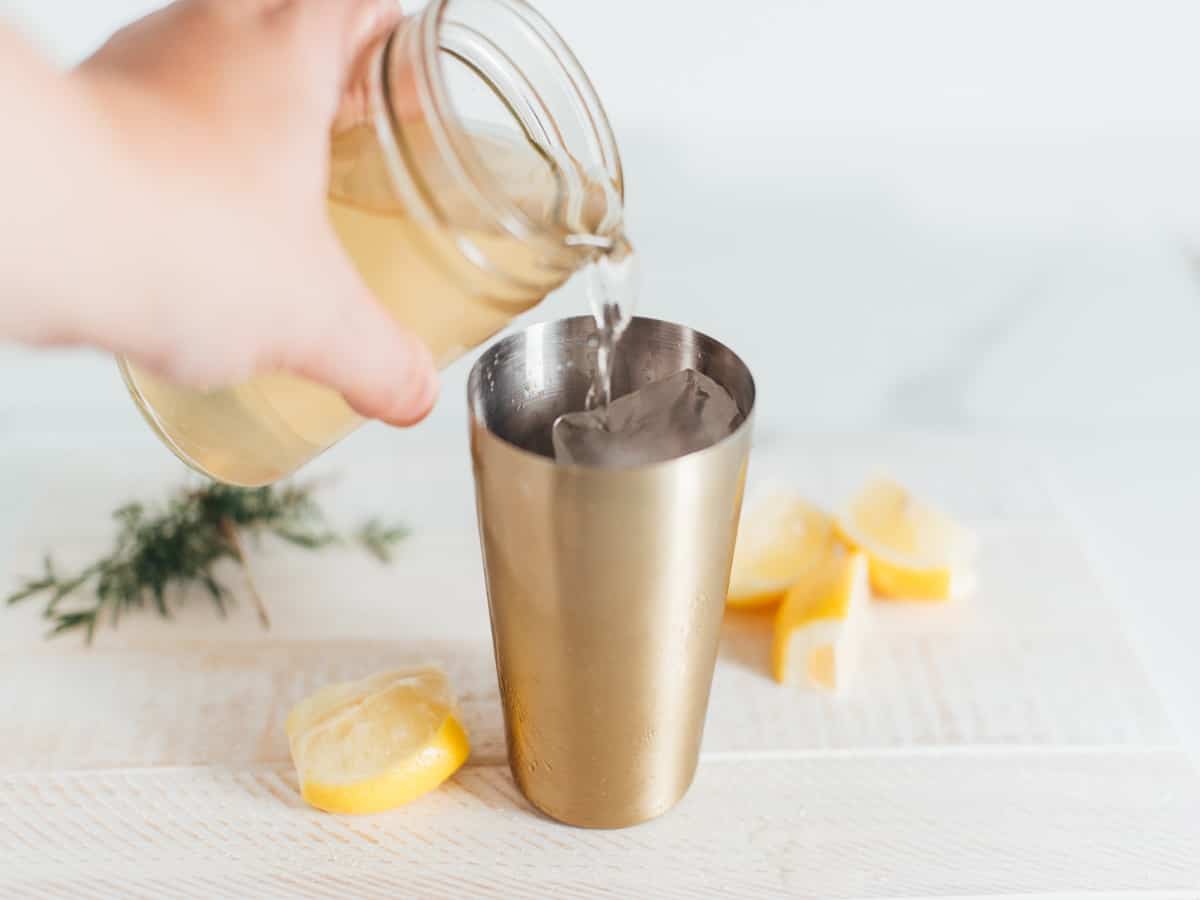 4. Pour in the honey syrup.

5. Shake vigorously for about 20 seconds. Strain into a double old-fashioned glass filled with ice.

6. Garnish with a slice of fresh lemon and a sprig of fresh rosemary. Crush the rosemary slightly between your fingers when adding it to release extra aroma and flavour. 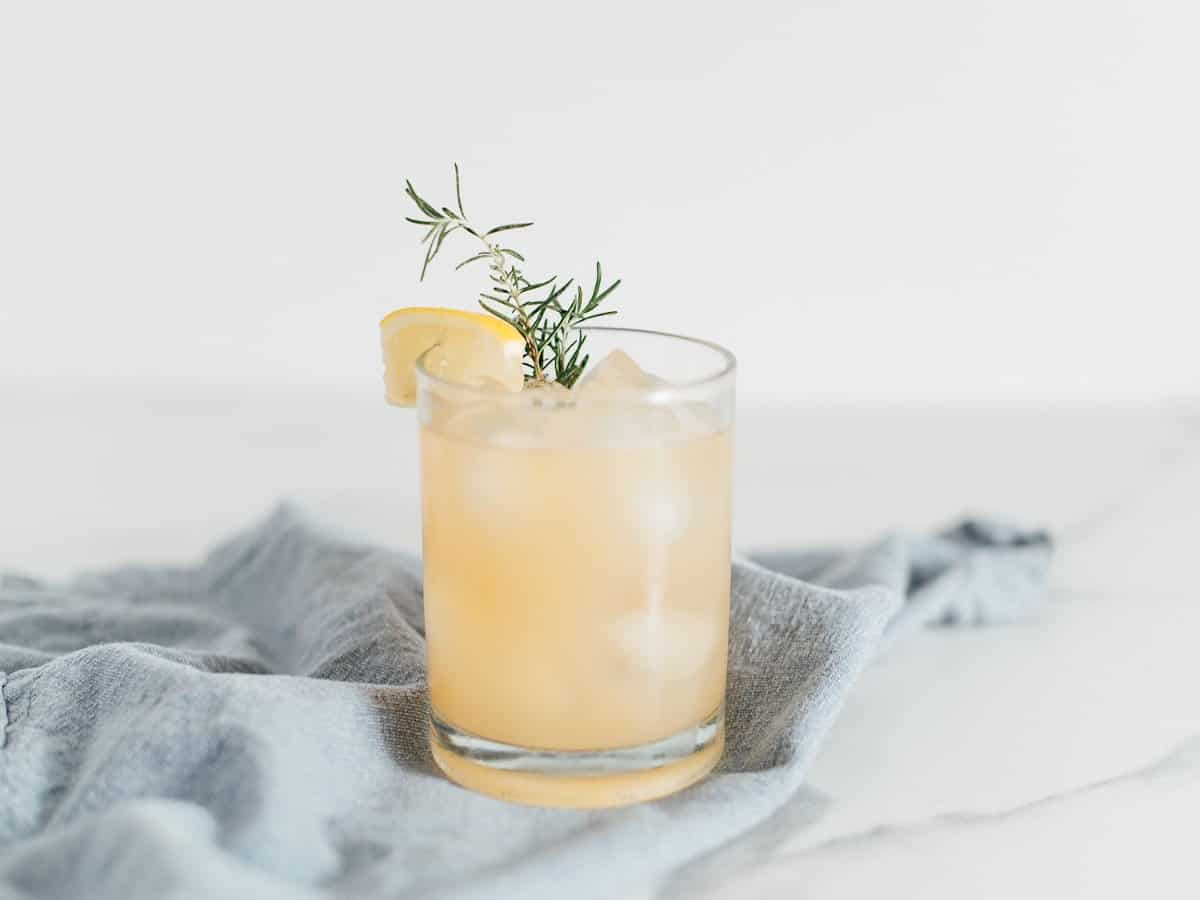 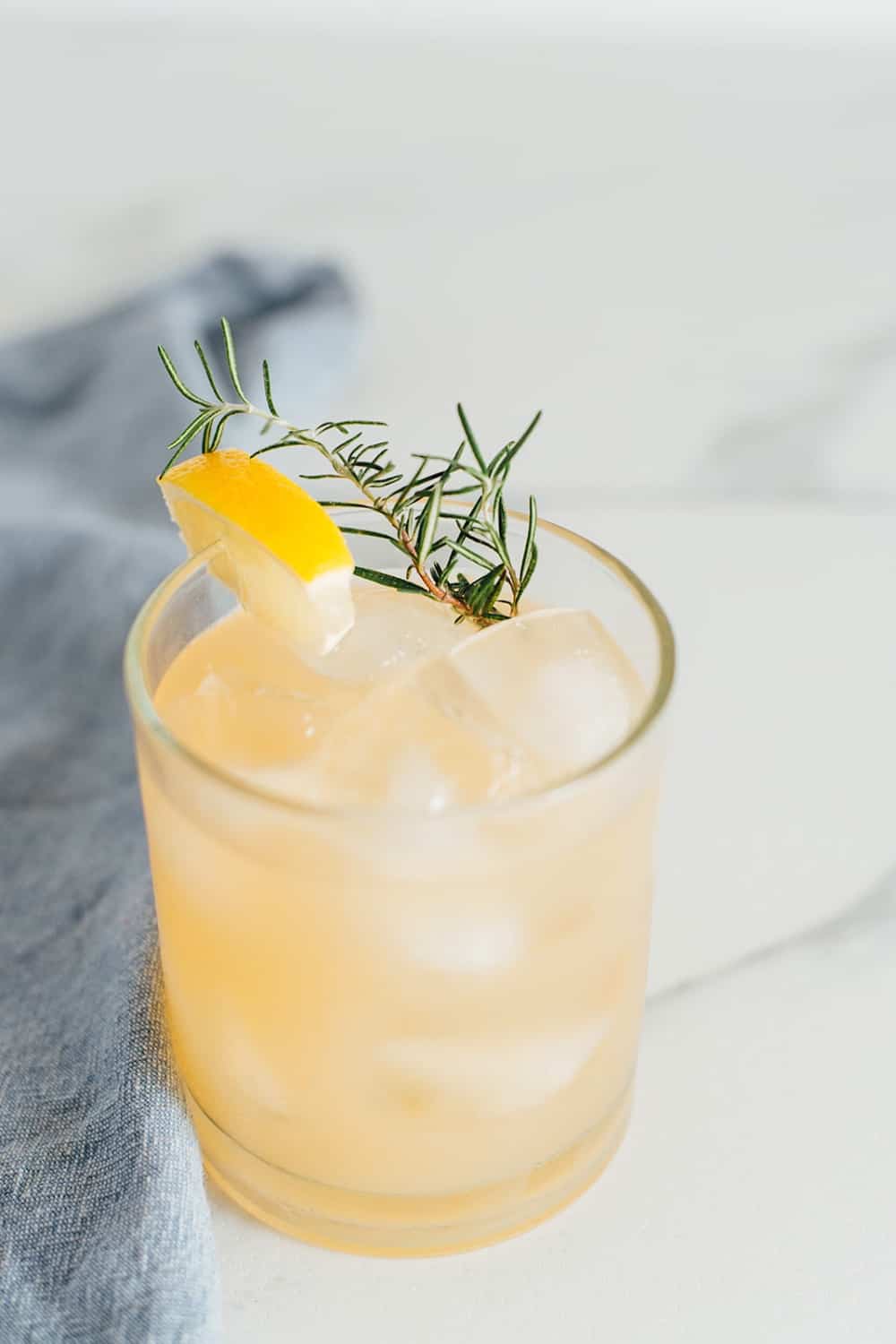 How to Pair a Chamomile Cocktail with Food

This light and refreshing cocktail pairs well with creamy and rich foods, dishes with fresh herbs and grilled foods.  It’s also does well with a charcuterie board of olives, sliced meats and nuts.

I enjoy serving this chamomile cocktail with a variety of dishes, from casual pizza to fancy lobster fettuccine. Check out some recipes below:

You can mix things things up by trying some variations on this cocktail recipe.

Can I serve this drink hot?

Yes, you can serve this drink hot. Try adding some star anise or cloves for additional spice.

Can I use bourbon rather than rye whisky in chamomile whiskey cocktails?

Which brand of rye whisky should I use?

Each brand will create a slightly different taste. While I like Crown Royal, Wisers and Forty Creek, you can also try a Scotch whisky. It would add a distinctive smoky flavour to the cocktail because the grain (usually barley) is malted and heated over a peat fire.

A whisky produced around the Inverness area (such as Tomatin Highland Single Malt Scotch Whisky) of Scotland would be a good choice to use in a chamomile cocktail as they’re usually light, smooth and fruity.

An intense, full-bodied whiskey such as Connemara Peated Irish Whiskey would likely be a bit too overpowering for this chamomile cocktail.

Other Refreshing Drink Recipes To Try 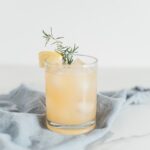 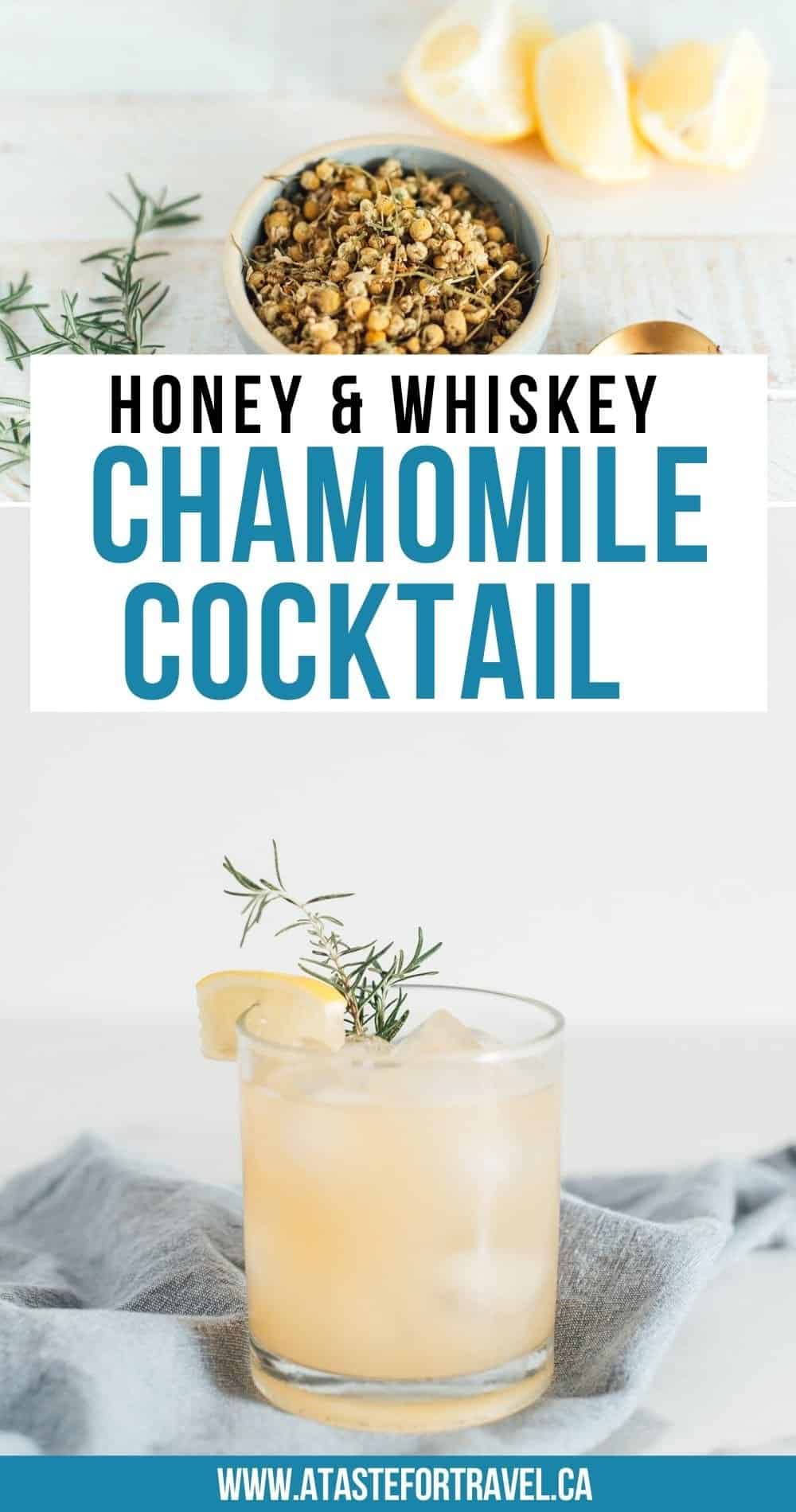 15 Bucket List Things to Do in the British Virgin Islands
Next Post: Must-Try Traditional Irish Food in Dublin, Ireland