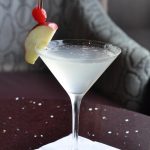 Japanese awamori, like whisky or brandy, is a unique delicacy in its own right. But it also works well in a variety of cocktails. The legendary distilled rice alcohol from the island of Okinawa, Japan features an elegant aroma and smooth taste that mixes especially well with fruit juices.

So if you’re looking for new ways to enjoy awamori, be sure to give this Lotus Blossom Cocktail recipe a try.

It’s a delicious and refreshing way to enjoy this Japanese liquor that has a history dating back to the 15th century Ryuku Kingdom.

Often called the “Hawaii of Japan”, Okinawa has a humid subtropical climate. Floral shirts known as Kariyushi — similar to an aloha or Hawaiian shirt — are even worn as business attire in summer!

One of the launching point into the Okinawa islands is Naha, the capital of Okinawa. Here, one of the top things to do  is chill out in the lively bars, restaurants and nightclubs of Kokusai-Dori Street and sample locally-produced awamori.

The famous Okinawa distilled spirit is made of indica rice from Thailand and special black koji mould. Although it’s also known as “island sake” it’s quite a bit different than sake. It has a much higher alcohol by volume (generally around 40% ABV).

In Naha it’s possible to tour the award-winning Zuisen Distiller, one of the top distilleries. During the tour you can learn how awamori is made and participate in a tutored tasting of kosu, aged for three years or more.

Although awamori is traditionally enjoyed neat or on the rocks, it’s growing in popularity throughout the world as the star ingredient in trendy cocktails.

During my cruise through Asia on the MS Volendam,  a Holland America mixologist shared several tropically-inspired cocktail recipes featuring awamori and sake.

Ingredients for an Awamori and Lychee Cocktail

One of the most delicious awamori cocktails is the Lotus Blossom Cocktail featuring lychee juice. The subtle floral sweetness of the lychee fruit pairs beautifully with the delicate aged awamori.

Lychee (litchi chinensis) has a long history. Its cultivation has been documented as far back as the 11th century in China, so it’s a natural fit with Asian spirits.

If you have extra lychee juice, you can also enjoy it in one of these popular Hawaiian cocktails. It’s especially delicious when included in a refreshing summer sangria made with white wine, rum and tropical juices.

Or, swap awamori in for rum, whisky or vodka in your favourite summer cocktail. You’ll love its depth of flavour and intensity.

If you do make this cocktail or any other drinks featuring awamori or lychee juice, we’d love to see your photos! Be sure to tag us on Instagram, Pinterest or Twitter at #atastefortravel

Awamori: A Guide to Japan’s Legendary Rice Liquor
Next Post: Pros and Cons of Renting a Car in Puerto Escondido, Mexico