We may earn income from advertising links in this post. Please read our Disclosure Statement for details.

It’s impossible to imagine the British tradition of Afternoon Tea without fine chinaware. If you’ve taken a food tour of London or been exploring the food scene in Britain, you won’t want to miss learning more about its famed pottery and fine china.

And there’s no more famous line of fine china, porcelain and accessories than Wedgwood, founded in 1759.

You can learn all about the company’s history, enjoy afternoon tea, shop for china in the factory shop and even try making your own pottery at the fascinating Wedgwood Museum and Wedgwood Visitor Centre in Barlaston, Stoke-on-Trent.

Visiting World of Wedgwood in Stoke-on-Trent

There’s no better place to learn about fine china than the Stoke-on-Trent area in the heart of England. if you’re planning a trip to the UK, it’s well worth adding to your itinerary as it’s just 2 hours from London by train.

Known as “the potteries”, this collection of small towns north of London developed as a centre for pot making in the mid 1700’s, when enterprising locals began digging clay from the side of the road to make their primitive wares.

The resulting potholes filled with water and were a travel hazard for horse carriages, but a fledgling pottery industry was born.

With plenty of local clay and coal to fire it with, Stoke’s industry grew to produce stoneware and bone china by some of the world’s finest craftsmen. It was also home to Wedgwood, a leading luxury ceramics company.

The Wedgwood Museum and World of Wedgwood makes an ideal place to visit if the weather is poor or in the off-season as it’s entirely indoors.  Check here for more ideas for the best UK winter breaks.

The Wedgwood Museum and Factory Visitors Centre was the centre of the company’s 250th anniversary celebrations. Full of history, British culture and interactive exhibits, the museum proves you don’t have to know a thing about pottery to enjoy a visit to Stoke-on-Trent.

I learned a lot during my visit to the Wedgwood museum — notably that the correct spelling is “Wedgwood” not “Wedgewood” as I’d originally thought!

Your education begins as you pass through the pastoral Staffordshire countryside enroute to the Wedgwood estate. The picturesque canals, now populated by ducks, swans and bright barges, were originally constructed to transport raw materials and finished product from the potteries.

Pro tip: For a scenic stay, we recommend the historic 14th century Moat House Hotel in the village of Acton Trussell, south of Stafford. It has a beautiful canal side location and is 45 minutes from the Wedgwood Museum. Check rates and availability for The Moat House in Stafford on Booking.com.

They reduced breakage by allowing the delicate china to travel by water instead of packhorses to faraway ports and overseas. Once the railway was built, commercial use of the canals declined but they remain a scenic legacy of the industrial era.

Displays are organized chronologically from 1730 to modern times.

Visiting the Wedgwood Museum begins with an introduction to Wedgwood history and its founder. One of the world’s first tycoons, Josiah Wedgwood had humble beginnings. Born to a family that manufactured primitive pottery, by six years old he was an apprentice in his family’s struggling business.

By 14, he had suffered a bout of smallpox that weakened his right knee. It was a disastrous circumstance in an industry where economic survival depended on a potter’s strength to use a treadle wheel. This disability forced Josiah to concentrate on innovation in technology, design and marketing.

Continuous experimentation with firing techniques and clay resulted in new earthenware called creamware. In 1765, Queen Charlotte granted permission for it to be called “Queen’s Ware.”

With this marketing coup, Wedgwood’s business boomed and he was able to build Etruria Works, a progressive new factory.

Today’s visitors can take a virtual “magic carpet ride” and experience a bird’s eye view of that factory. They can also explore the secrets behind the development of the iconic blue and white Jasperware, the first significant innovation in ceramics since the discovery of porcelain by the Chinese nearly 1,000 years earlier.

The neoclassical themes, drawn from ancient Roman, Greek and Egyptian mythologies, reflected his contemporaries’ fascination with archaeology. You can see that reflected in products such as Wedgwood Tri-Color Jasperware Oval Tray

Wedgwood’s crowning achievement is the Portland vase, a copy of the original from Alexandria c. 27 BC. After his death, the company went on to produce buttons, vases, medallions and cameos.

What is the color of Wedgwood? While the best known of Jasperware is blue, it was also produced in white, grey and a unique and beautiful pink.

Fun Things to Do in the Wedgwood Museum

Ever wondered what you might have looked like on a Wedgwood blue cameo? Find out at a unique display where you select the background, a computer takes your snapshot and transforms your silhouette into a cameo-like image.

Download a computer file online the next day and email your Wedgwood “cameo” to those back home.

The Wedgwood eye for style has been key to the company’s success. The museum showcases a range of lucrative lines such as the fantastical Art Deco Fairy Lustreware. It was designed by potter Daisy Makeig-Jones from 1915-1931 and can fetch up to $57,000 per piece at auction.

In the swinging 1960’s, Wedgwood remained in the vanguard of modern design. One of the most notable designs was by Susie Cooper, a modernist known for her flamboyant colors.

Newer pieces, such as those produced for London’s Fashion Week, are as hip as it gets. You’ll also see creations from top designers in modern collections such as those by Vera Wang.

Hands-on at Wedgwood World and Factory

If you find your fingers itching for some hands-on pottery time, head next door to the Wedgwood Factory Visitors Centre in Wedgwood World.

There you can talk with artisans, many of whom can trace their family connections with Wedgwood back to the 18th century, and watch their painstaking work. For an extra charge, you can even make your own pottery.

Throw a Jasperware pot on the wheel, paint a piece of pottery or decorate a vase (extra cost)– you’ll find it challenging, but skilled and patient demonstrators are on hand to help.

Once you’ve created your own unique souvenir, Wedgwood will even ship your work of art home for you (in the UK). And before you leave don’t miss visiting the Wedgwood shop whereyou can pick up some fantastic bargains and unique souvenirs.

Round off your visit with lunch featuring locally-sourced fare or an indulgent afternoon tea. It features a delectable selection of sweet and savoury sandwiches and pastries.

One of the highlights of this elegant experience  is the Wedgwood tea and fine Wedgwood chinaware used for the tiered cake stands, teapots, cups and saucers.

Other Things to Do in Stoke-on-Trent

While in the Stoke-on-Trent area, it’s well worth stopping at some of the other unique museum and other nearby sites.

Learn more about things to do in Stoke-on-Trent, also known as the World Capital of Ceramics.

Although the giant bottle kilns are long gone from the Wedgwood factory, a few still remain at the nearby Gladstone Pottery Museum. History and architecture lovers will appreciate the atmospheric setting of this open air museum, which was the site of the Gladstone China Works.

It is now preserved as the last complete Victorian Pottery factory in Britain. Amid the red brick kilns blackened with soot, it’s easy to imagine the hardships endured by workers toiling in the industrial age.

Travellers interested in learning more about Britain’s industrial past should also stop at the Ironbridge Gorge World Heritage Site in nearby Shropshire. It was the hub for 300th anniversary celebrations of the birth of the Industrial Revolution.

Set amid an area of stunning natural beauty, the site holds 10 fascinating museums. There’s a recreated Victorian village, the Jackfield tile museum and the historic Coalport potteries with their towering brick kilns.

While in Stoke-on-Trent, be sure to make time to stop for a lunch in one of the many small cafes and restaurants. Dishes to watch for include a Ploughman’s Lunch, the best  cheese, charcuterie, chutney and pickle platter  you’ll ever try, and Welsh Rarebit, perfectly toasted bread topped with a heavenly mix of grilled melted cheese, beer and English mustard.

While there, it’s also worthwhile exploring Great Malvern, a hillside spa town that reached its heyday in Victorian times. It was a popular destination for those seeking refuge from the polluted skies during industrial times. Florence Nightingale, Charles Darwin (the grandson of Josiah Wedgwood) and Queen Victoria were all fans of visiting the spas in Malvern.

They believed the “Water Cure” — which consisted of hiking and sipping water drawn from the 100 ancient wellsprings that dot the Malvern Hills — could treat persistent illness such as arthritis, tuberculosis and other ailments.

Today, although all of the original water cure establishments have long disappeared there are lots of things to do. It’s possible to hike the Malvern hills, sip the waters and experience spa treatments at the Malvern Spa Hotel. This stylish facility offers a natural hydrotherapy pool, a salt grotto, herbal steam rooms and cold treatments at the base of the hills.

Whether you choose to visit the Wedgwood factory, the Wedgwood museum or other potteries, visitors to Stoke-on-Trent will discover that Wedgwood’s history is much more than just the story of a pottery company and the inspiring man who founded it.

Rather, it is an integral part of the history of the Industrial Revolution and of many aspects of British culture and society.

Getting to Wedgwood Museum

Overnight in London before heading to Stoke-on-Trent. For convenience, choose a hotel that offers easy connections to the airport and/or train station.

The luxurious Athenaeum Hotel on the Piccadilly line, is in Mayfair within easy walking distance of parks, shopping and Kensington Palace. It also offers an elegant afternoon tea.

The Radisson Blu Edwardian Berkshire  offers stylish accommodation at reasonable rates as well as proximity to the bustling shops of Oxford Street.

Independent Travel: By rail to Stoke-on-Trent, the journey is less than 2 hours from London’s Euston Station. Visit www.BritRail.com or call 1 866 BRITRAIL. It’s a 15 minute taxi ride from Stoke to the Wedgwood Museum and Wedgwood Visitor Centre.

The World of Wedgwood Factory and Visitors Centre is next door. Visit exhibits, try your hand at throwing a pot or shop for factory seconds from the Waterford Wedgwood Group. Admission is £ 10  per adult

The Moat House: The historic 14th century Moat House Hotel has a scenic canal side location in the village of Acton Trussell, south of Stafford. Allow 45 minutes travel time to the Wedgwood Museum. The Moat House is our top choice for food-lovers.

They offer a luxury Afternoon Tea (including a Gentlemen’s version with ale, cheeses and  black pudding), as well as a pub and the acclaimed fine-dining restaurant with a fixed price menu. It’s also got one of the most expansive vegetarian and vegan menus I’ve seen.

Check rates and availability for The Moat House in Stafford on Booking.com.

Check rates and availability at the Best Western Stoke-on-Trent on Booking.com

Check rates and availability at The Malvern Spa Hotel on Booking.com.

Take a Food Walking Tour of London (and get a discount too!) 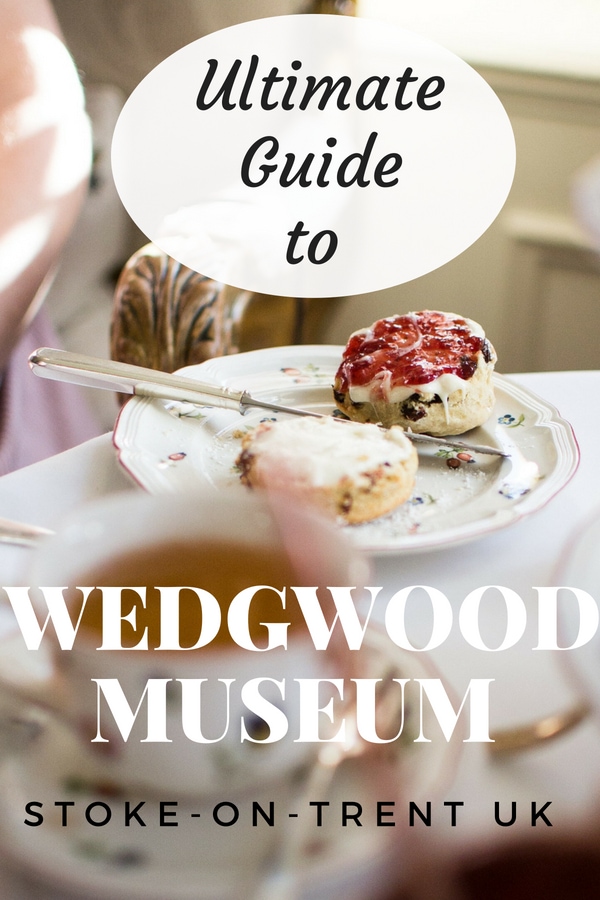