It makes a delicious party appetizer or game day food when topped on tostadas or tucked inside tacos.

What is Salpicón de Res?

What exactly is salpicón?  The term refers to a dish of one or more finely diced ingredients bound with a sauce. While there are many varieties of salpicon around the world — beef, crab, tuna and even pork — the beef version is especially popular in Guatemala.

Salpicón de res, a shredded beef, radish and mint salad, is a traditional Guatemalan food typically served at parties and get togethers. It’s served year-round and makes the perfect appetizer or side dish because you can make it in advance.

Unlike mayonnaise-based salads that have to stay super-chilled, you don’t have to worry about contracting food poisoning while transporting it during hot weather. It should be served at room temperature.

When served on tostadas, salpicón de res is also popular served as an appetizer. Unlike chojin, a similar traditional Guatemalan food also popular as an appetizer but made with chicharron (fried pork rinds), it’s not deep fried making it lower in calories and heart-healthier.

This easy Guatemalan appetizer is excellent for serving a crowd as it begins with a whole roast of beef. But much as with many other recetas guatemalteca you can also make make salpicón de res from leftover pot roast or brisket. Simply chop the leftover roast into small pieces and then add the salad dressing and vegetables according to the recipe instructions below.

Using leftover roast beef doesn’t produce exactly the same dish as the traditional, start from scratch recipe. But I promise it will be just as popular and disappear just as quickly!

I use a Dutch Oven so I can place the meat inside with enough water so it’s 50% covered with liquid. Then, I can forget about it for a few hours and just wait until it’s soft and tender.

You can also choose to cook it in a slow cooker for five to six hours at a low setting.

Tip: If you cook a large roast and have leftovers is to use the extra beef to make machaca con huevo, a spicy beef and scrambled egg dish popular in northern Mexico

While the beef is cooking, you chop the onions and herbs you’ll be using. The key is to chop them finely and make sure they’re completely dry.

Seed the tomatoes and chop them into small pieces.

Trim the radishes, slice crosswise and then chop finely.

Wash, dry and finely chop the cilantro and mint.

Mix the lime juice and naranja agria (orange juice) in a separate bowl for the dressing. Naranja agria is an important ingredient as it adds a hint of bitterness to the dish.

It’s possible to purchase a small bottle of Goya Naranja Agria from Amazon, but you can also substitute unsweetened orange juice and grapefruit juice.

Once the beef is tender, remove it from the liquid (reserve the broth for later to make Sopa de Albondigas Guatemalteco – Healthy Meatball Soup ) and allow it cool enough so you can separate the meat into long strands.

Once the roast is shredded lengthwise, then you can chop the meat into smaller pieces crosswise.

Combine the shredded and chopped meat with the vegetables and stir in the dressing and add salt and pepper to taste.

Serve garnished with avocado or crema drizzled overtop. Enjoy it with tortilla chips or on tostadas.

If you’re looking for a vegetarian appetizer, another easy Guatemalan appetizer to make is tortitas de ejote. Check out our recipe for  Green Bean Fritters or Tortitas de Ejote Guatemalteco

I first tried salpicón de res Guatemalteco in the home of my husband’s best friend, Juan Carlos. His wife Idalia hails from Chiquimula, a sweltering but picturesque city surrounded by mountains near our family ranch in Zacapa, Guatemala.

Her cool radish salad appetizer made an ideal midday snack and featured shredded radishes, which added a peppery flavour and colour.

You can find recipe variations of this shredded beef salad across Central America and in Mexico. Many variations of salpicón de res feature an oil and vinegar vinaigrette and oregano rather than mint.

If you’ve got a bounty of mint in your garden and you already sipped your fair share of mojitos, Salpicón Guatemalteco is a good way to use it up.

You can choose to make salpicón de res (beef) or salpicón de pollo (chicken) with fresh mint, they’re both delicious.

What Cut of Meat to Use (Carne Para Salpicón Guatemalteco)

In Guatemala and Mexico, you can tell the butcher the name of the dish you’ll be making and he’ll  give you the exact cut of meat needed for your recipe. In Canada, it’s not so easy.

I used a blade roast for this salpicon de res recipe. You can substitute flank steak, brisket or any other cut of meat that’s marbled and tenderizes with a long cooking time at a low temperature. 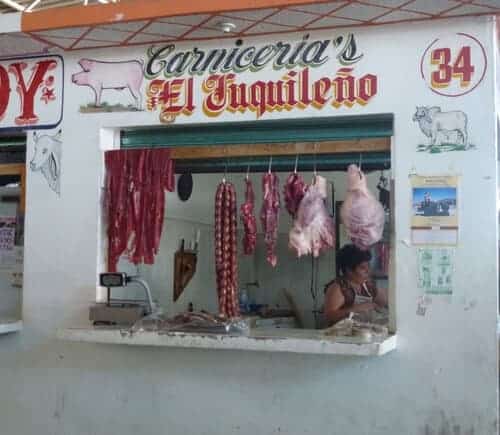 Note: Nutritional information is created by online calculators so the figures are only estimates.

Looking for more recipes from Guatemala? Check out these authentic recetas guatemaltecas:

The Best All-Inclusive Resorts in Cancun Riviera-Maya
Next Post: Best Girlfriend Getaways in the Caribbean