For a person who didn’t get to Italy until last year, I’m making up for lost time. I’m back in Italy this month, heading from Rome to Venice with Insight Vacations Luxury Gold to write about their ultra-luxe tours. But this time, during my independent time, I won’t make the same mistakes I made on my first trip to Rome.

My mistakes weren’t major — I didn’t get thrown in jail or sent to the hospital — but  if you have a limited amount of time in a country and you have a lot of pent-up demand (in my case a list of 150 dishes I wanted to try and certain paintings I wanted to see) — you don’t want to leave anything to chance.

Here are three mistakes to avoid when you’re visiting Rome:

1.   Not Booking Your Rome Museum Tickets in Advance

I know EVERY guidebook recommends this, but when you’re in the last-minute flurry of packing, meeting deadlines and trying to get to the airport in time, sometimes it’s tempting to postpone things until later.

In my defence, I did check the booking website for the Gallery Borghese in advance, but when I saw that dates were wide open for several weeks, I decided to wait until we arrived in Rome to actually purchase tickets.

We were staying at Parco dei Principi Grand Hotel & SPA , directly across from Villa Borghese Park and Borghese Gallery. So I thought arriving in Rome three days in advance would be plenty of time to get tickets. Wrong!

By the time we arrived in Rome, every ticket for the next few weeks was gone. No amount of tipping the concierge, begging at ticket booths or arriving early at the gallery, hoping a ticket holder would be a no-show, could get me inside and beyond the gift shop.

Titian’s “Sacred and Profane Love” and  Caravaggio’s “David with the Head of Goliath” were beyond my reach. This time I’ve booked my museum tickets in advance.

Tip: If you’re on a two or three day itinerary in Rome and you find yourself shut-out of the Borghese gallery, a good alternative is Palazzo Barberini. This spectacular 17th century palace features a stunning staircase by Bernini as well as La Fornarina, a painting of Rafael’s mistress.

Plus, tickets are much easier to get.

Another option if you can’t get into the Borghese Gallery is to see the Caravaggio paintings in situ – within the churches for which they were commissioned, rather than inside a gallery. This option has several advantages as the lighting and drama of the paintings are presented in the way the artist intended them to be.

The church of San Luigi dei Francesi ( Church for French citizens in Rome) features three jaw-dropping paintings , all depicting Saint Matthew. The paintings are set in shadow, which makes it possible for  viewers to appreciate Caravaggio’s powerful use of illumination as a symbol of a miraculous force in the battle between good and evil.

The church is located near Piazza Navona so is definitely worth a look. Entrance is free.

Even though we couldn’t get into the Borghese Gallery, the Parco dei Principi Grand Hotel & SPA was excellent. It would be a  good option for families with kids as it’s across the street from the Villa Borghese Gardens and also has an outdoor swimming pool. Check out these other hotel recommendations for exploring Rome with kids.

2.  Missing Out on the Best Food in Rome

If it’s your first trip to Rome you don’t want to waste your time on mediocre meals ( and they do exist in Rome)  or get stuck in a tourist trap, place yourself in the trusted hands of food pros who know where (and when) to eat.

Fortunately, I was invited to join the Taste of Testaccio, a 4-hour walking tour with Eating Italy Food Tours in Rome so enjoyed a full morning exploring the market and sampling suppli ( rice balls fried to golden crispiness), truffled pecorino and dreamy Sicilian cannolo at tavola calda and food shops in one of Rome’s most authentic neighbourhoods.

Read about this delicious food tour in my Review of Two Eating Food Walking Tours in Rome. Subscribe to our blog and you’ll also get a 15% discount on all Eating Europe Food Tours!

I also followed the recommendations from Eating Italy Food Tours and dined at Osteria Der Belli, a seafood restaurant in the Trastavere neighbourhood. It was one of the best meals we had in Rome.

But many other times, we arrived back at our hotel so exhausted from exploring the streets of Rome,  I couldn’t drag myself out again and ended up grabbing something at any old place. Next time, I’ll do a bit of planning and get some good food to go.

Foodie Tip: If you’re near the Spanish Steps and you want a portable snack rather than a meal, I highly recommend getting mini-sandwiches to go from Canova Bar at Piazza Del Popolo. It’s pricey to sit outside at the cafe overlooking the Basilia of Santa Maria del Popolo but the staff at the take-out counter will pack up some delicious finger foods.

Then you can enjoy a tasty DIY Afternoon Tea at  your hotel (we stayed at nearby Hotel d’Inghilterralocated within a 16th century palace once frequented by poet John Keats).

A great spot to eat near the Spanish Steps  is Al Vicoletto di Piazza di Spagna, a tiny restaurant tucked in an alleyway at Vicolo Belsiana 46-47. Not only is it quiet with plenty of shade — no selfie stick vendors in sight either — but they offer chilled beer on tap and very good spaghetti alle vongole  (spaghetti with clams).

Also check out these recommended three restaurants in Rome for breakfast, lunch and dinner.

3. Wasting your time standing in line at the Colosseum or Vatican

Normally, I love to spend a few days in a new city wandering around, popping into attractions when the inspiration hits. If it’s your first trip to Rome, another  really cool way to see Rome in two days is by taking buses, vespas and bikes. While it’s possible to do this in Rome ( see Barberini Palace above), it’s not a wise idea to try this for attractions like the Colosseum or the Vatican.

This is the time to book a Vatican Museum, Sistine Chapel and St. Peter’s Guided Tour and skip the line.  By enjoying fast-track access, you’ll free up a lot of your valuable time in Rome and not waste a minute standing in crowds.

On our Venetian cruise and escorted tour with Uniworld, I breathed a huge sigh of relief as we breezed past lineups like this one at the Colosseum.

You can also save time by purchase a Combination Ticket (for the Colosseum, Roman Forum, and Palatine Hills attractions) at the Palatine Hills as it’s got the smallest line-ups.

Some tours even offer the opportunity to visit The Vatican after hours, which means not only will you skip the line-ups but you’ll avoid the crowds.

And there are always larger crowds during  Jubilee Holy Year of Mercy for Catholics, a rare event declared by Pope Francis when he opens the bronze Holy Doors of St. Peter’s Basilica.  This is a big draw for Catholic pilgrims, an estimated 20 million extra visitors were received in Italy in 2016.

Hotels: Before I join the Insight Vacations Luxury Gold Tour, I’m staying at Hotel Mediterraneo, an Art Deco hotel near Termini Station. Built in 1936, it sits on top of Esquiline Hill, the highest of Rome’s Seven Hills. Located close to attractions and transportation, it’s a a great location for a first trip to Rome.

Budget Accommodation in Rome: Another mistake you don’t want to make in Rome is overpaying for your hotel. Rome can be very expensive if you stay in a centrally located luxury hotel.

One option worth considering for your first trip to Rome is staying in a convent or monastery in Rome. Not only are these no-frills guest rooms located near major attractions such as the Spanish Steps and the Vatican but they’re very economical.

Family Travel: Check out this post on A Weekend in Rome from Life Unexpected. 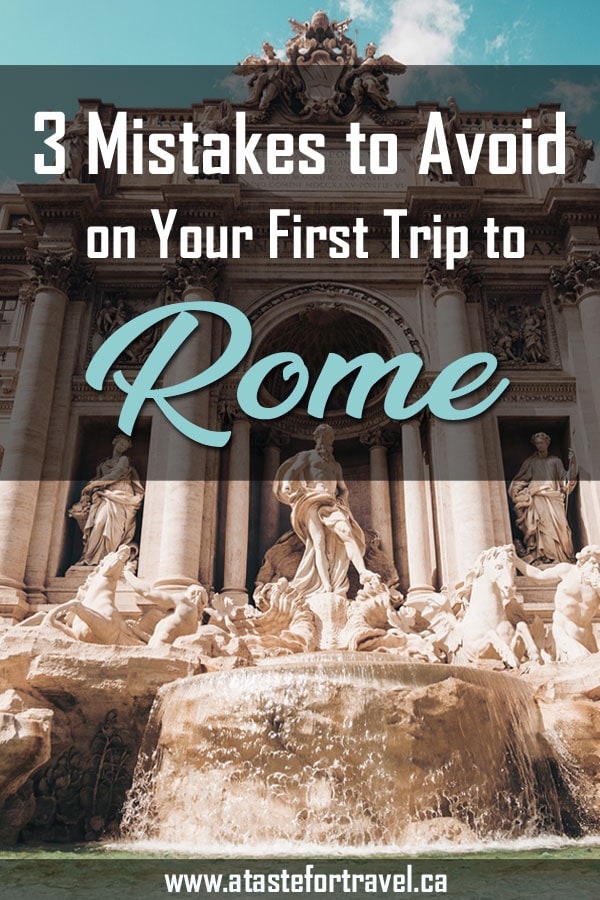 « Dreams Playa Bonita Panama: A Paradise for Nature Lovers
A Guide to the Termini Neighbourhood of Rome – Safety, Hotels, Food »

Dreams Playa Bonita Panama: A Paradise for Nature Lovers
Next Post: A Guide to the Termini Neighbourhood of Rome – Safety, Hotels, Food