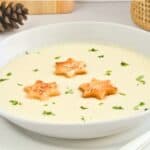 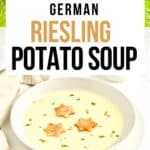 This silky, traditional German Riesling Potato Soup makes an elegant first course for special occasions such as Thanksgiving, Christmas Eve, Christmas Day and New Year’s Eve. But it’s so easy to make, you can whip up a pot for a weekday meal or après-ski dish.

Loaded with creamy potato goodness, it draws its bright notes from a generous splash of crisp, fruity Riesling wine. It’s topped with star-shaped, cinnamon-dusted croutons for an added festive touch.

The original recipe for this holiday soup was provided by Emerald Cruises’ Executive Chef Igor Pitonak during a cooking class on an 8-day cruise of the Rhine and Moselle rivers. He then generously shared the recipe so we could make it at home.

The flavour combo is magic!

Why We Love This Holiday Soup Recipe

What are the origins of this Riesling soup? It’s a traditional soup of Germany’s Moselle Valley.

One of the best things about European river cruising is the opportunity to immerse yourself in the local culture of the countries and towns you visit. And that means food!

River ships dock in the heart of Europe’s historic cities and into towns and villages that big cruise ships can’t visit. Each day there’s a new destination and its culinary traditions to discover.

Our 8-day river journey of the  Legendary Rhine and Moselle on the Emerald Sky with Emerald Cruises began in the historic wine town of Mainz near Frankfurt, Germany.

Considered one of the most scenic river cruise routes in Europe, the itinerary features shore excursions to hilltop fairytale castles, storybook villages, ancient vineyards and centuries-old wineries, including Eberbach Abbey founded in 1136.

Onboard there are lots of opportunities to sample regionally-inspired cuisine and locally-sourced ingredients in the dining room  as well as cooking classes and tutoured wine tastings within the Horizon Bar & Lounge.

It doesn’t get much more local than cooking with wine made from grapes harvested from vineyards you can see right outside the window!

The Romans first planted vines on the sunny slopes of the German section of the Moselle about 2,000 years ago.

The region produces some of Germany’s most prized white wines, especially those of Riesling grapes, due to the unique geography and soil.

Why is Riesling wine from Germany so special? The narrow Moselle River Valley traps the heat while the river itself acts like a mirror helping to intensify the sun’s rays on these cool-climate grapes.

The slate and quartz sediments in the soil also gather heat during the day and radiate it back at night.  The steep slopes also protect the late ripening vines from harsh winds.

During our cruise we sampled a wine range of elegant Riesling wines.

Their character varied depending on where the grapes were grown. Some were “flinty” and earthy while others, where the soil had more sand and gravel, were light and lively.

But they all had a beautiful balance of fruitiness, minerality and acidity.

In Bernkastel, founded in 1291, we joined fellow guests for a walking tour past the medieval town’s gabled, timber-framed buildings to the atmospheric wine cellar at the Dr. Pauly-Bergweiler winery.

During our tutored tasting, we learned about the wine estate’s 15 different vineyards, each with its own character.

The upfront minerality and fruity notes of apricot, vanilla and honey in the off-dry Bernkastel “Doctor” wines, such as Dr. Pauly-Bergweiler label (available in Canada and the USA), makes them especially good for this Riesling soup.

What is the best wine to use in Riesling soup? The best wine is a quality Riesling that you’d also enjoy drinking.

Dr. Pauly-Bergweiler wine we’d sampled on our cruise was sold out at our local LCBO.  So I undertook a fair bit of “research” tasting a variety of wines to find another with a flavour profile to suit this Riesling soup recipe.

Drawn by an Aeroplan bonus points promotion, I opted for Deinhard Green Label Riesling. It’s a medium sweet, pale straw-coloured wine from Bernkastel-Kues, with good minerality and sweet flavours of apple and peach.

My first impression when sipping the Deinhard Riesling was that it was quite a bit sweeter than I’d expected.

But the hints of citrus and honey actually added bright notes to the creamy soup which kept it from being too sweet. I’d use it again in this recipe.

Another cool-climate wine that worked well in this recipe was an off-dry 2017 Riesling from Chadsey’s Cairns in Prince Edward County, Ontario.

While more zesty and citrusy than a German Riesling, it also made a delicious soup. So, feel free to be creative when selecting a Riesling wine for cooking.

Although, based on how a Viognier worked in this creamy lobster fettuccine dish, I’m also willing to bet that it would also work well in this recipe.

Potato: In Ontario, farmers grow seven main varieties of potatoes. So unless you live in Bolivia (where there are a whopping 4,000 varieties) you’re likely to have these main varieties to choose from.

They’re classified as long, round whites, round reds, or sweet. While long varieties of white potatoes have fluffy interiors ideal for baking and mashing, the best potatoes for potato soup are round white or red. They’re not waxy so will create a smooth not gummy texture.

For soup with a deeper yellow hue, go with a Yukon Gold potato. Look for potatoes that are firm, free from bruises, cuts and rot. Avoid potatoes with a green tinge.

Cream: Due to the starchiness of potato which acts as a natural thickener, we can use table cream (18% milk fat) which is lower than the 36% milk fat usually used in cream soup recipes.

Butter: Unsalted butter is best for this recipe so you can control the flavour.

Vegetable Oil: Choose quality canola or corn oil. You can use olive oil if you choose a light flavoured oil.

Vegetable Stock: Homemade vegetable stock is always best but if you purchase store bought opt for a low sodium brand. Choose a light-coloured vegetable stock to keep the pale colour of the soup.

White Pepper: White pepper is milder than black pepper and allows the flavour of the Riesling wine to shine through. It also doesn’t discolour the beautiful pale hue that German Riesling soup is famous for.

Bread: The best bread to use to make the croutons is a firm bread of medium thickness that can be cut with a cookie cutter.

Parsley: The mild bitterness of fresh parsley complements the creaminess of the soup while its vibrant green colour adds interest. .

Scroll down to the recipe card for full method and quantities.

To Make the Soup

1. Peel and finely chop the onions. 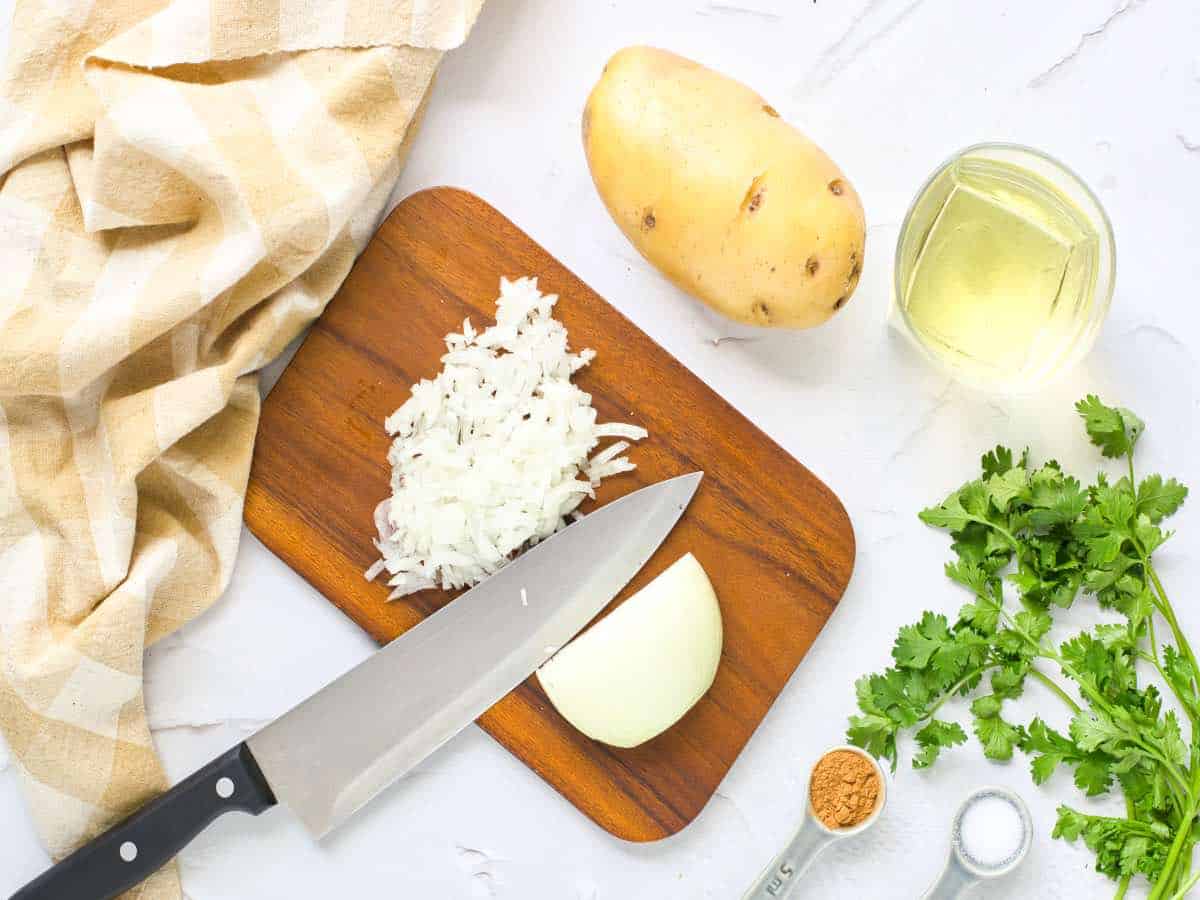 2. Peel and dice the potatoes into small pieces. Tip: If the peels on the potato are thin you can leave them on.

3. Saute the onions in butter until soft but don’t allow to brown. 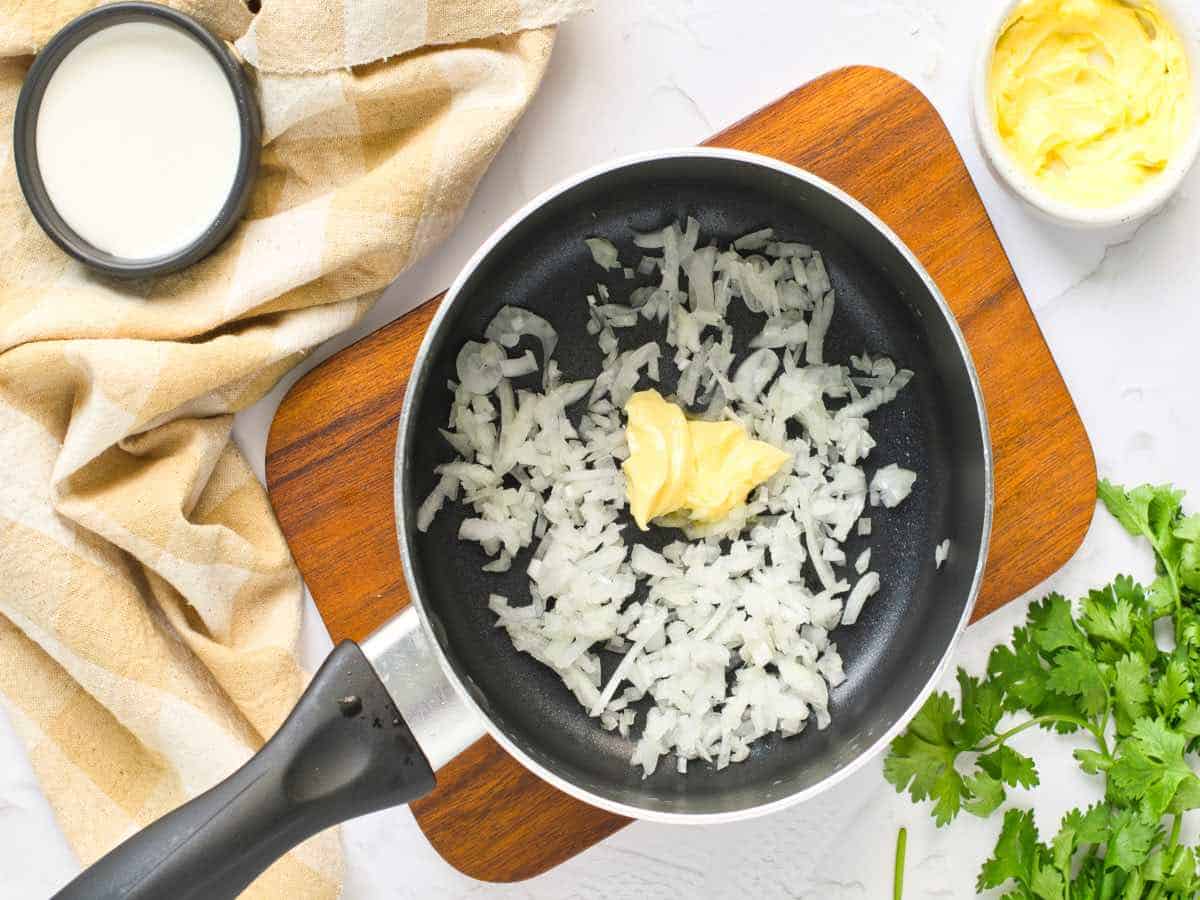 4. Add the diced potatoes to the pan and some salt. Stir. 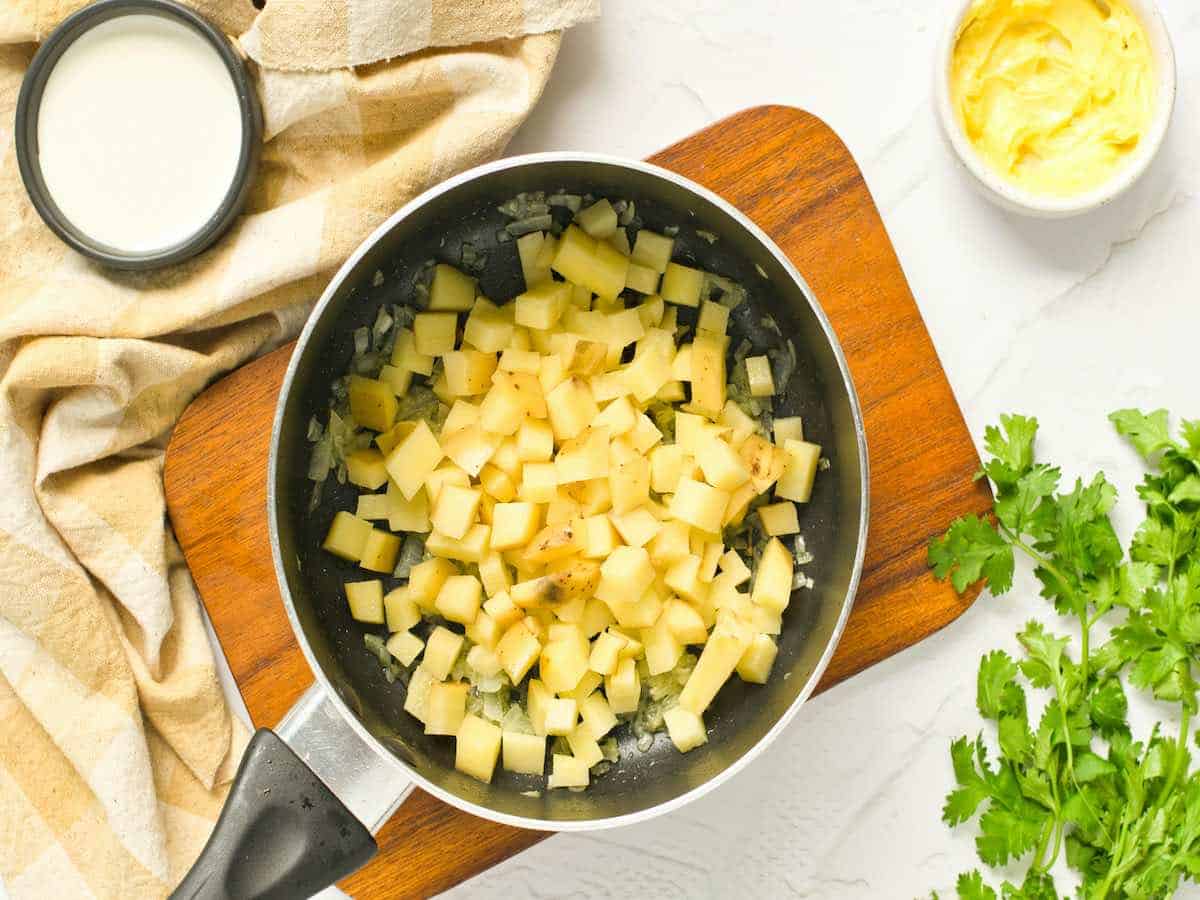 5. Pour in the Riesling wine, followed by the broth and half of the water.

6. Bring to a boil, reduce heat and simmer for 20 minutes or until the potatoes are very tender. Add the remaining ½ cup of water if it gets too thick. 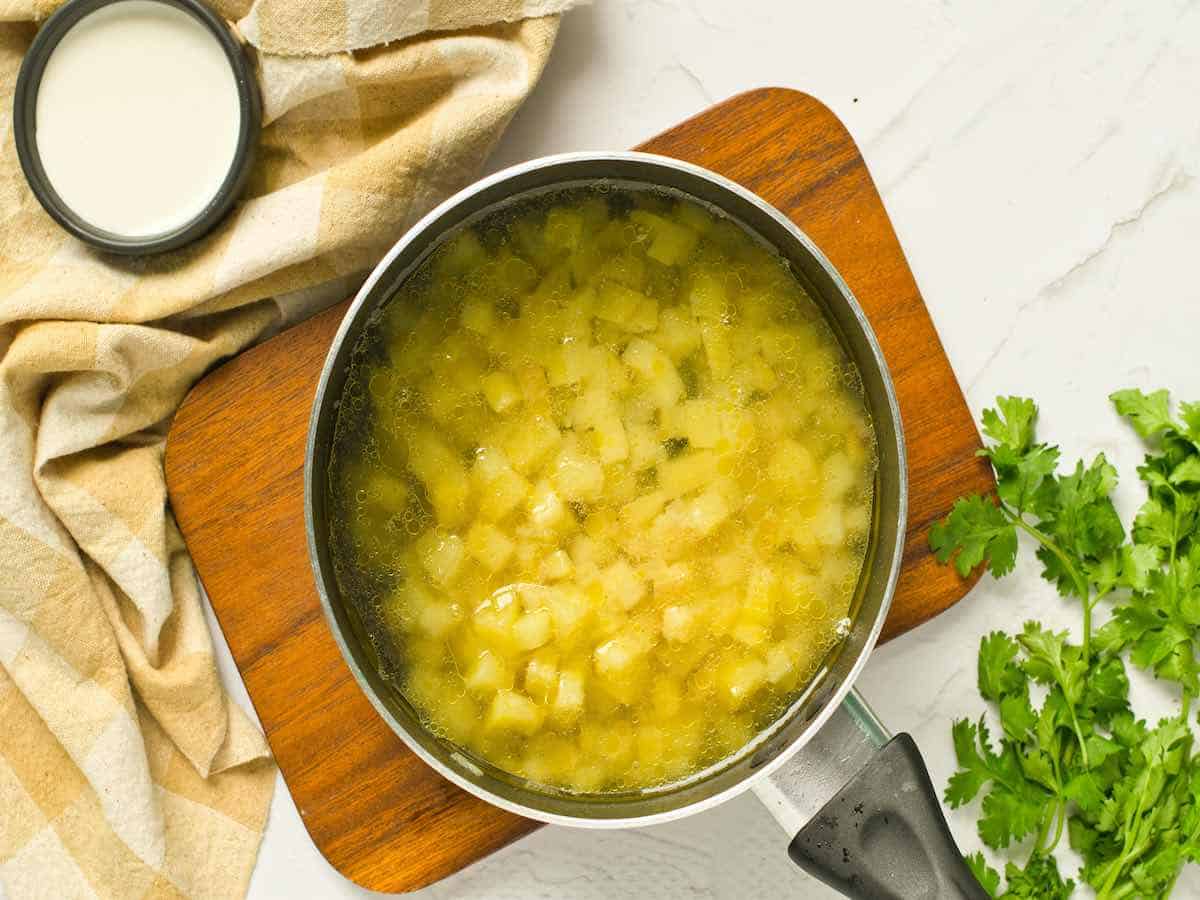 7. Remove from heat and blend until creamy smooth with an immersion blender or in a blender such as a Vitamix. 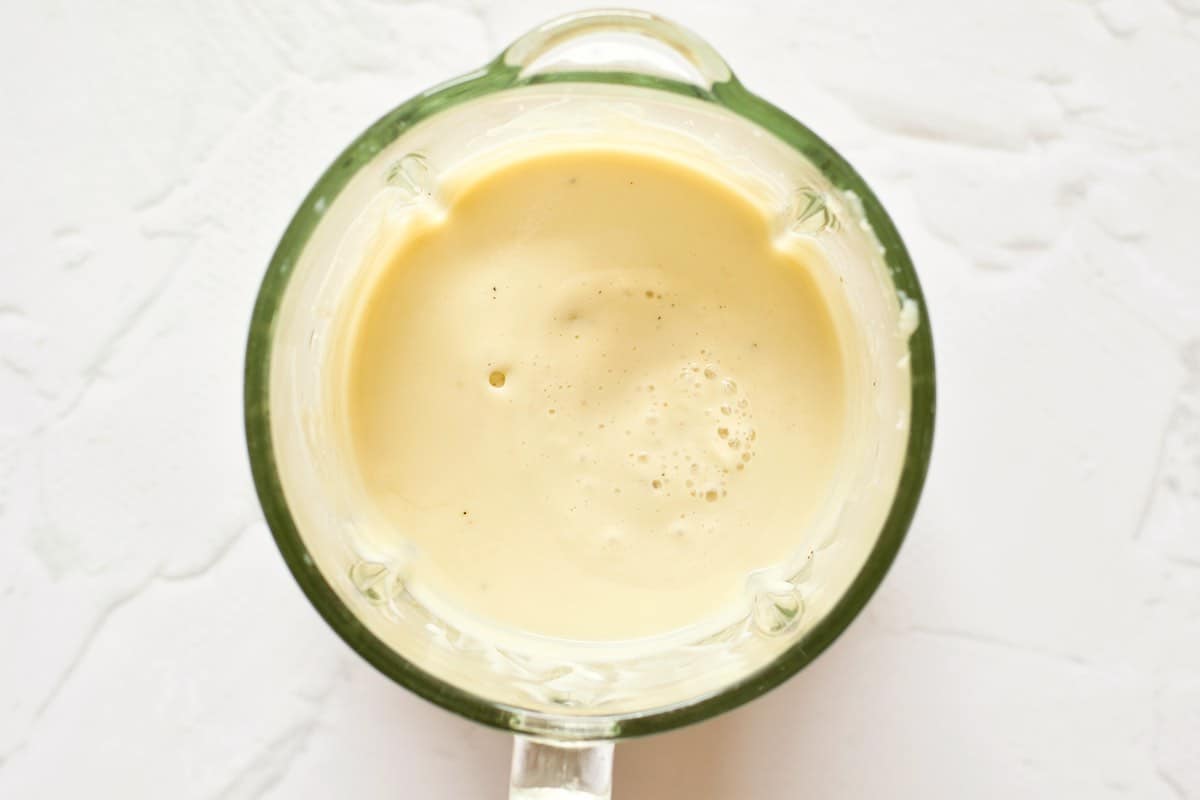 8. Once the mixture is very smooth, return to the pot. 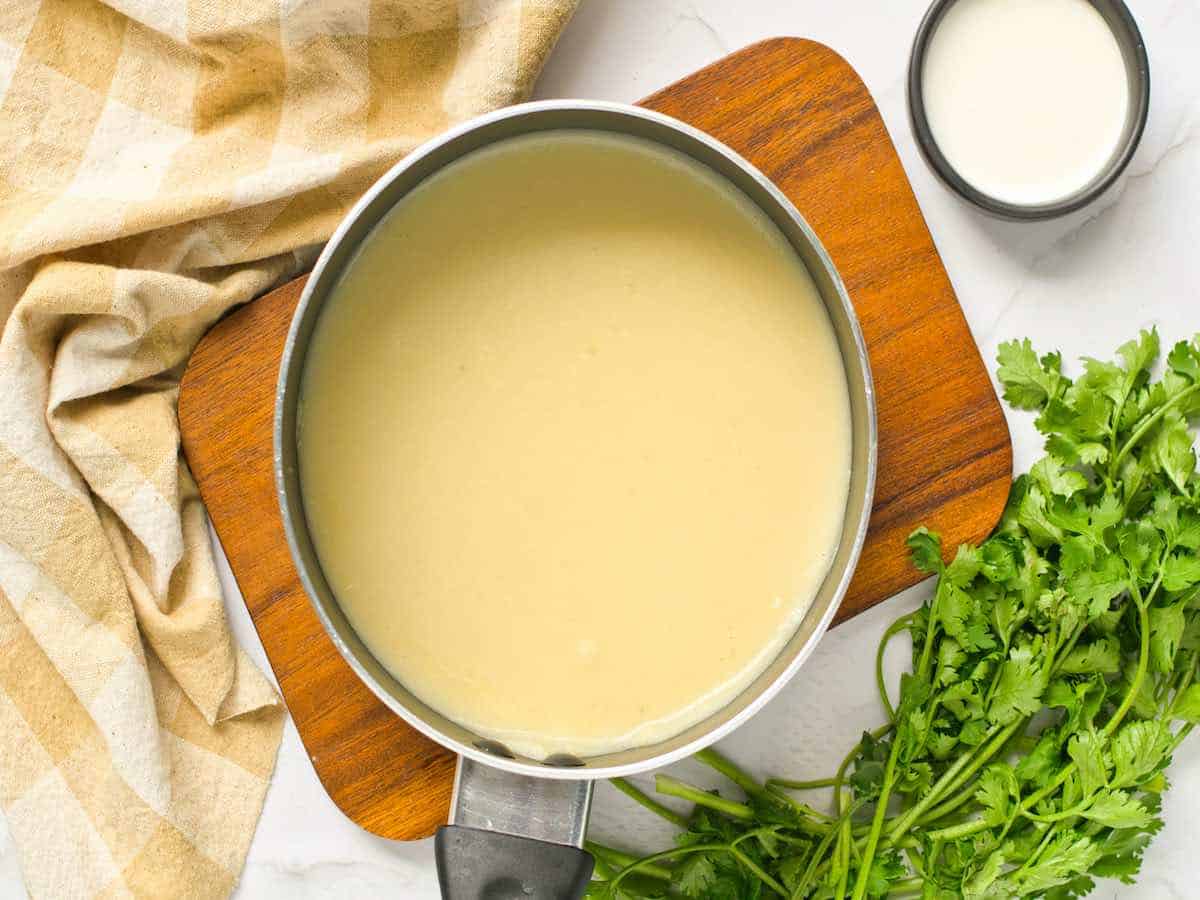 9. Add the cream and the white pepper.

Stir and bring to a very low simmer. Taste and adjust seasoning as desired. 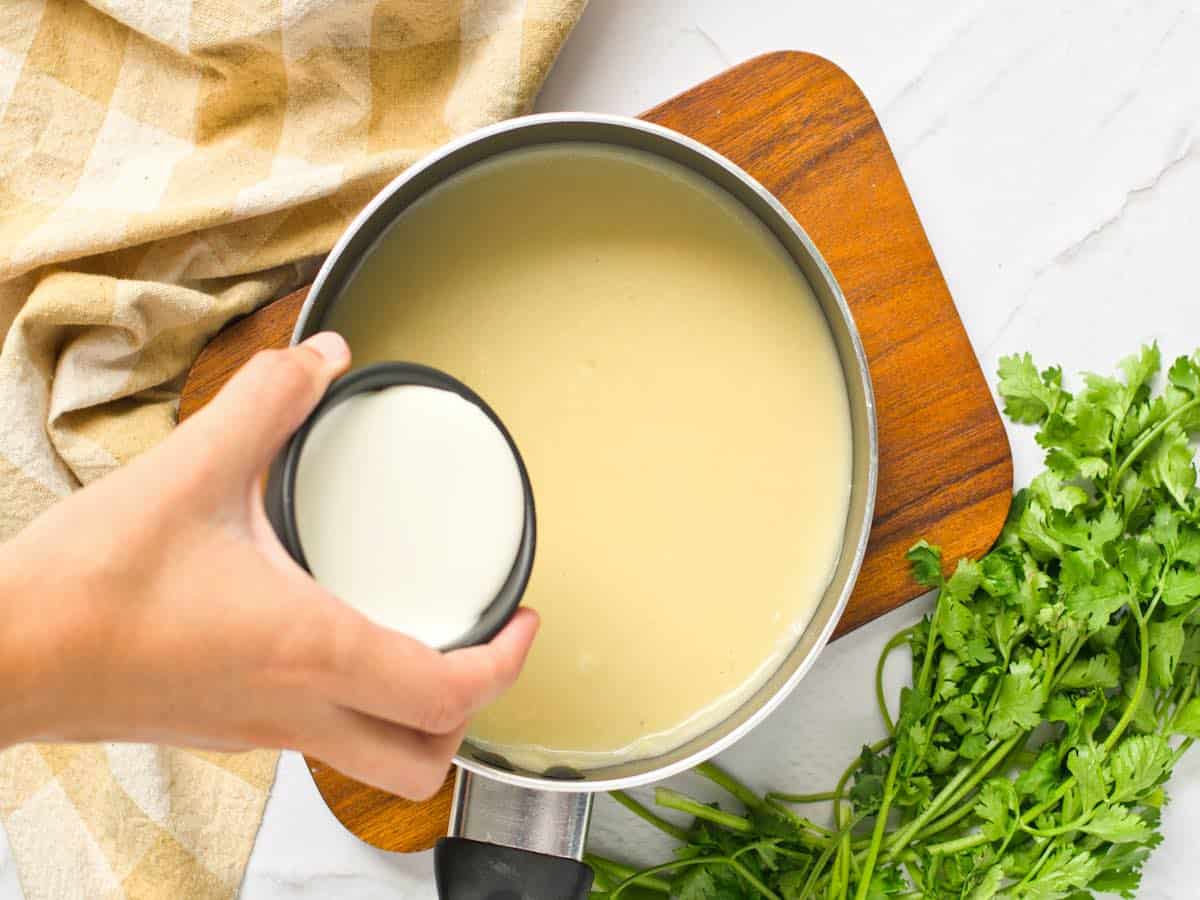 10. While the soup is heating, make the croutons.

11. Cut 12 stars from slices of white (or rye) bread using a cookie cutter. Or, you can use a stencil and kitchen shears. 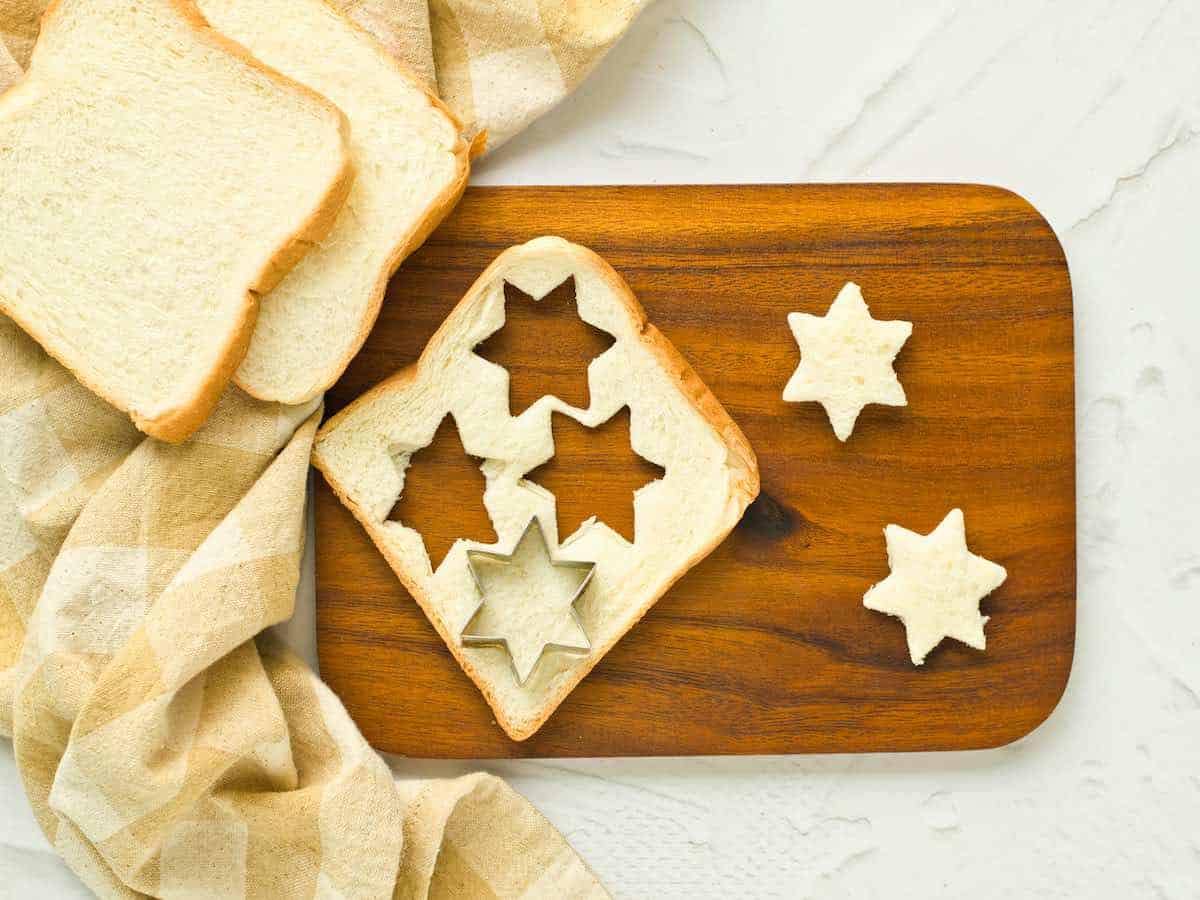 12. Then fry the bread on both sides in vegetable oil (or light flavoured olive oil) until crispy. 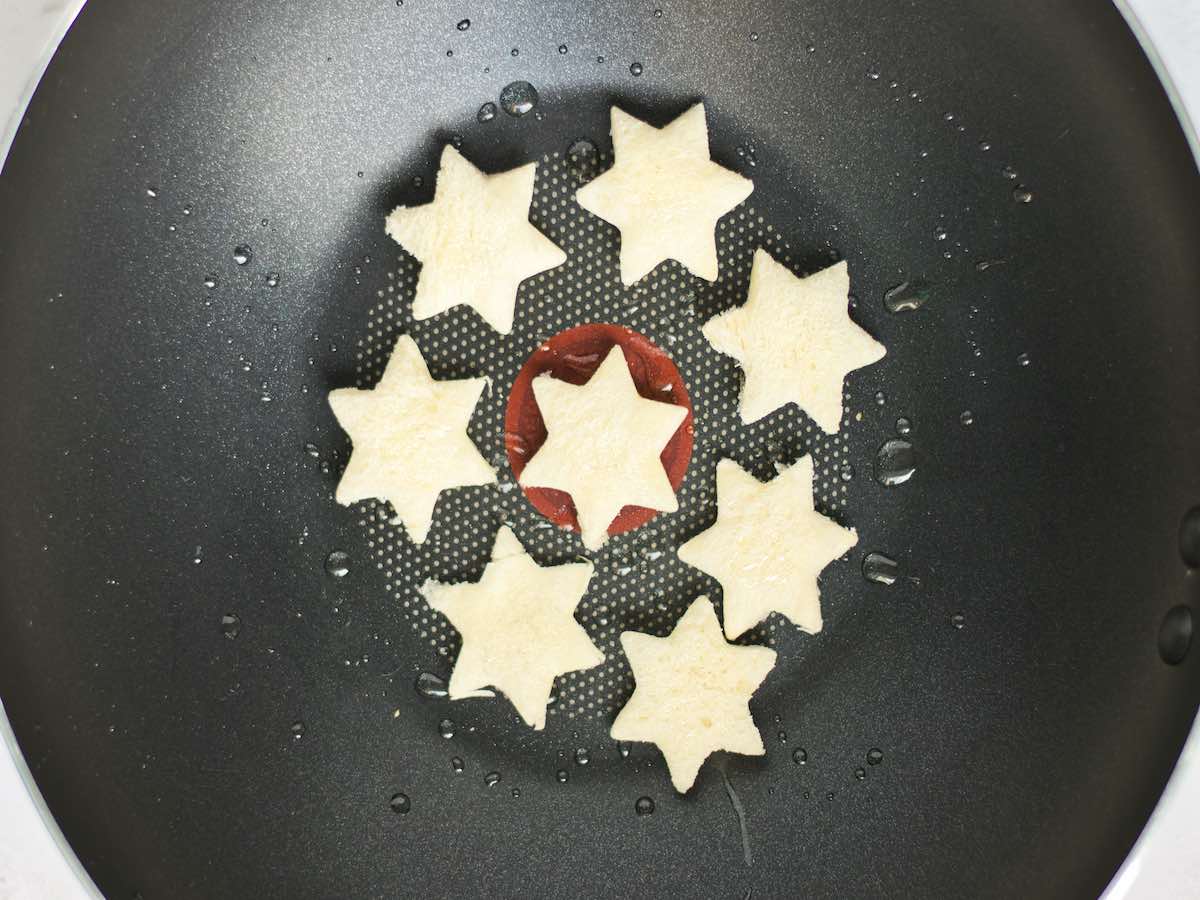 13. Drain on a paper towel. Sprinkle lightly with powdered cinnamon. 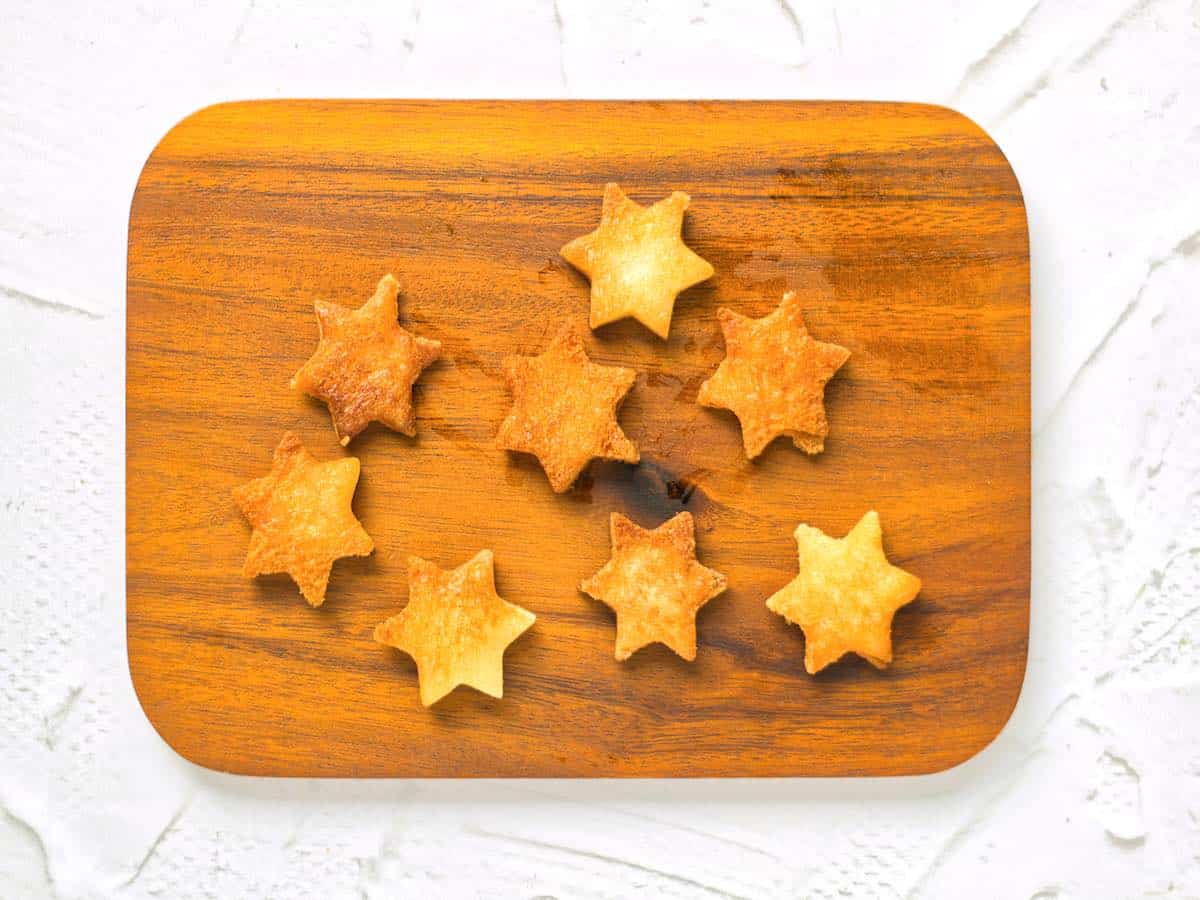 14.  Pour the soup in the bowl and top with three croutons in each bowl. Sprinkle with chopped fresh parsley. 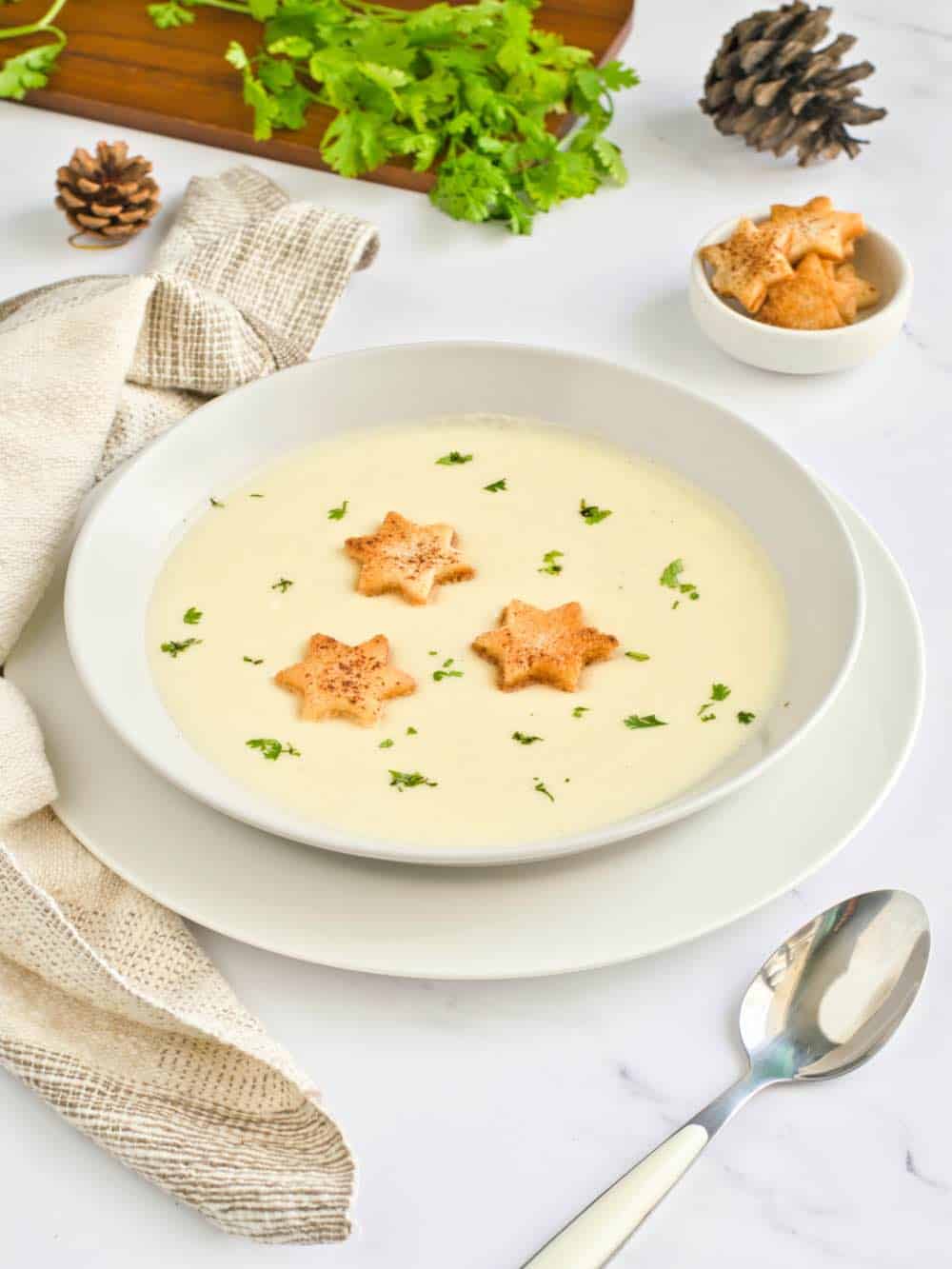 What to Serve with Potato and Riesling Soup 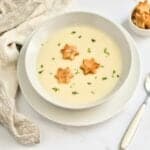 Note: Nutritional values are prepared by an online calculator so may not be accurate. 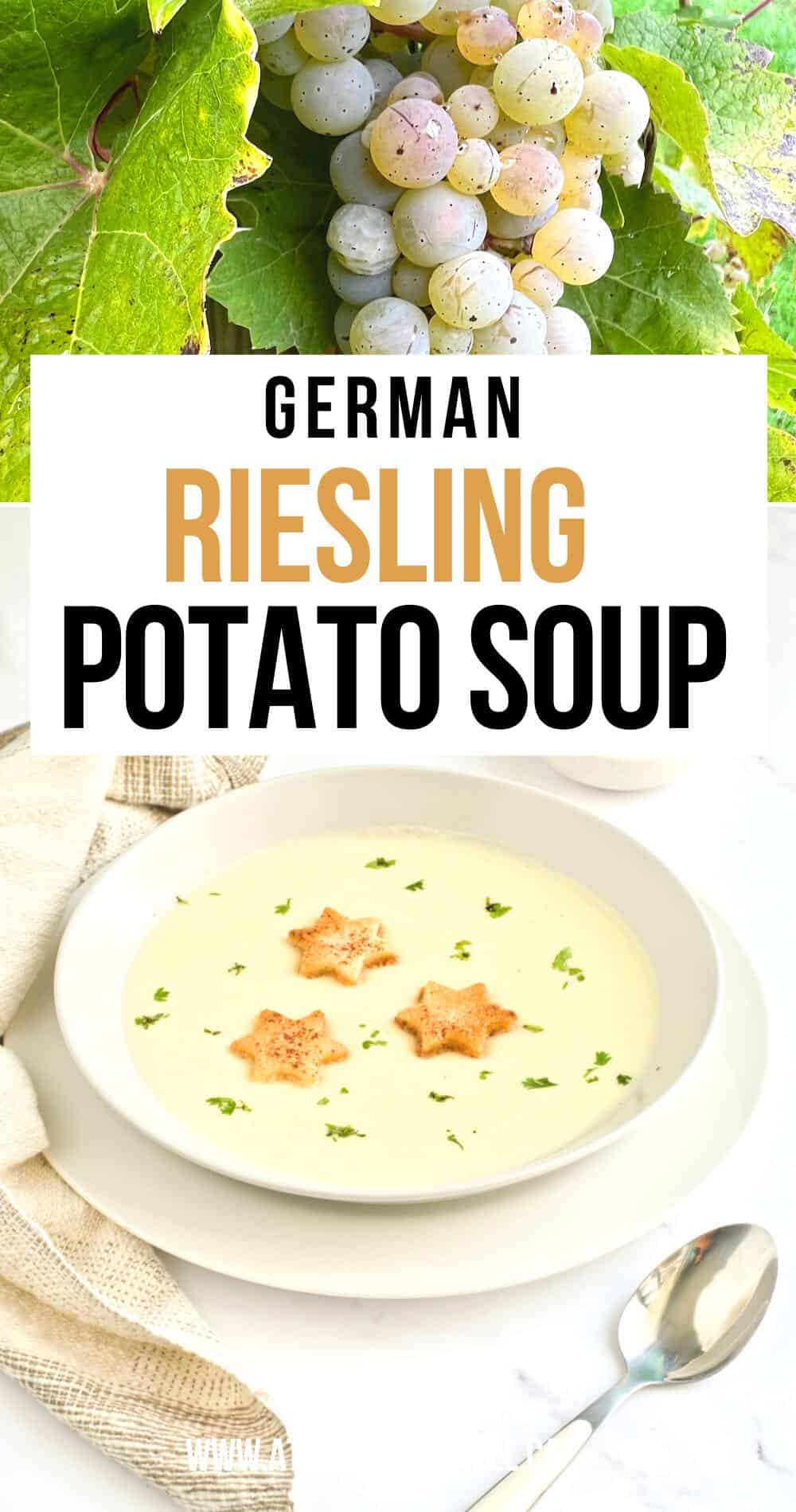 How to Celebrate Day of the Dead in Guatemala
Next Post: 20 Traditional Turkish Drinks You Don’t Want to Miss