Home » Recipes » 15 Delicious Salt Cod Recipes From Around the World 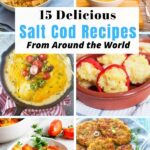 Salt cod fish — also known as bacalao (Spanish) or bacalhao (Portuguese) — is beloved around the world. You can find it in many traditional dishes from the Caribbean to Portugal, where it’s said there’s a salt cod recipe for every day of the year. Although salt cod is often seen in Lent recipes, you can cook with it year-round.

Its popularity dates back to the 16th century when fresh cod was preserved in salt for long ocean voyages. In modern times, salt cod is a handy ingredient to have on hand, thanks to its incredibly long shelf life. The process of drying and salting cod not only preserves the fish, it intensifies its flavour.

So, if you’ve seen a slab of dried fish in your supermarket and wondered what you could make with it, you’ll find lots of inspiration in this collection of simple salt cod recipes from around the world.

Because dried salt cod needs to be rehydrated, it does take some pre-planning. If you’ve never cooked with salt cod, scroll down to the end of the post for instructions on how to prepare it for cooking.

If you’ve never tasted salted cod, give it a try!  This collection of delicious recipes from around the world is sure to make you a salt codfish lover.

1. Basque Bacalao a la Vizcaina by A Taste for Travel

Bacalao a la Vizcaina is a delicious Spanish salt cod stew that hails from the Basque region of Spain. Although it’s most popular during Lent and on Christmas Eve, you can enjoy its delicious combination of savoury spices, tomatoes, olives and potatoes any time of year.

This fast and easy Baked Cod in Cheese Sauce or bacalhau quatro queijos is a 30-minute dish made from cod fish fillets smothered in a creamy cheese sauce. It’s topped with a bright vegetable salsa for a splash of colour!

Kiss goodbye to boring fried rice and say hello to this Caribbean Saltfish Fried Rice. Salted cod pieces seasoned and cooked in a medley of brown rice and vegetables.

This Saltfish Ground Provision – Caribbean Bacalao Breakfast – is popular on the island of Dominica as well as much of the English, Dutch and  French-speaking Caribbean.

For a satisfying meal featuring salt cod try this recipe for fanesca soup from Ecuador. It’s traditionally made during Lent to capitalize on an abundance of spring vegetables and salt cod. With rice, beans and vegetables, this Ecuadorian Spring Soup is a hearty filling soup that can serve as a meal on its own!

Delicious bakaliaros – cod in batter – “μπακαλιάρος” in Greek is a traditional food enjoyed on March 25th during Lent. It’s made with salted cod, fried in a beer batter, and often served with a skordalia dip. You won’t be able to resist eating more than one of these tasty bites!

This Italian style way of making salt cod, or baccala, is super simple, healthy and very delicious! Insalata di Baccala is a perfect recipe to enjoy during Lent.

Like fish and chips? Then you’ll love baccalà, an Italian-style battered salt cod recipe. It features a very light batter which makes it very appealing to children and adults alike!

This Jamaican saltfish fritters recipe will instantly transport you to the Caribbean. So flavoursome, crispy and more-ish. They make the perfect snack or appetizer!

10. Jamaican Cabbage and Saltfish by That Girl Cooks Healthy

Cabbage and Saltfish is a Caribbean stable that is tasty yet so easy to pull together and whip up within 30 minutes. This versatile Jamaican dish features flaked cod fish steamed with onion, garlic, tomatoes and steamed cabbage

For a delicious northern recipe, this Norwegian Salt Cod Stew, or Bacalao from the Spanish word for cod, is made with salt cod, olive oil, stewed tomatoes, garlic, shallots, and potatoes.

It’s no surprise that many recipes for salt codfish come from Newfoundland. For centuries, the fisheries of the Grand Banks of Newfoundland  and the Georges Bank provided salt cod to countries around the world.

This traditional Nova Scotia recipe for salt cod cakes from Canada is quite simple, easy to make and easy on the budget. It’s also very versatile as, although it traditionally features salt cod with mashed potatoes, egg, onion and celery (optional), it can also be made with leftover salmon, cod or tilapia.

A popular way to prepare saltfish in Trinidad and Grenada is in saltfish souse, a flavourful mix of salt cod, shredded vegetables such as carrot, peppers, onions and scallions, often enjoyed for breakfast. Saltfish souse is the perfect complement to traditional Grenadian coconut bakes and provisions. Get a recipe for saltfish souse from Simple Grenadian Cooking.

Discover more about saltfish souse and other traditional dishes from Grenada.

These salt cod stuffed piquillo peppers are Spanish comfort food in tapas form – the potato and salt cod filling is smooth and packed with flavour. They make a great appetizer or serve as part of a tapas meal.

How to Prepare Salt Cod 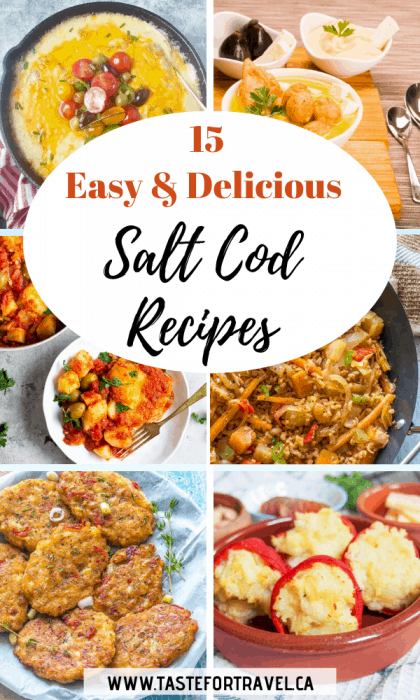 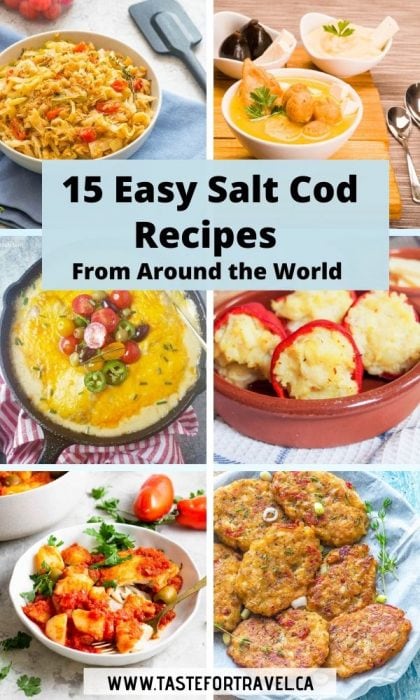