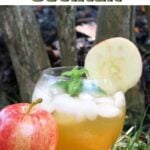 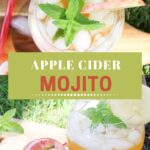 While there are lots of ways to enjoy the crisp, sweet flavour of fresh apples — from salads such as our Creamy Apple Jicama Slaw to classic apple pie — one of the best ways to savour the end of summer is with a fresh apple cocktail.

The delicious blend of light sweetness, caramel and spice also makes it the ideal cocktail for Halloween or Fall Harvest parties.

You can feel good about this cocktail for many reasons!  Not only does it capture the harvest season vibe but with all the vitamins and minerals in the fresh apple cider, it might even qualify as a healthy cocktail! 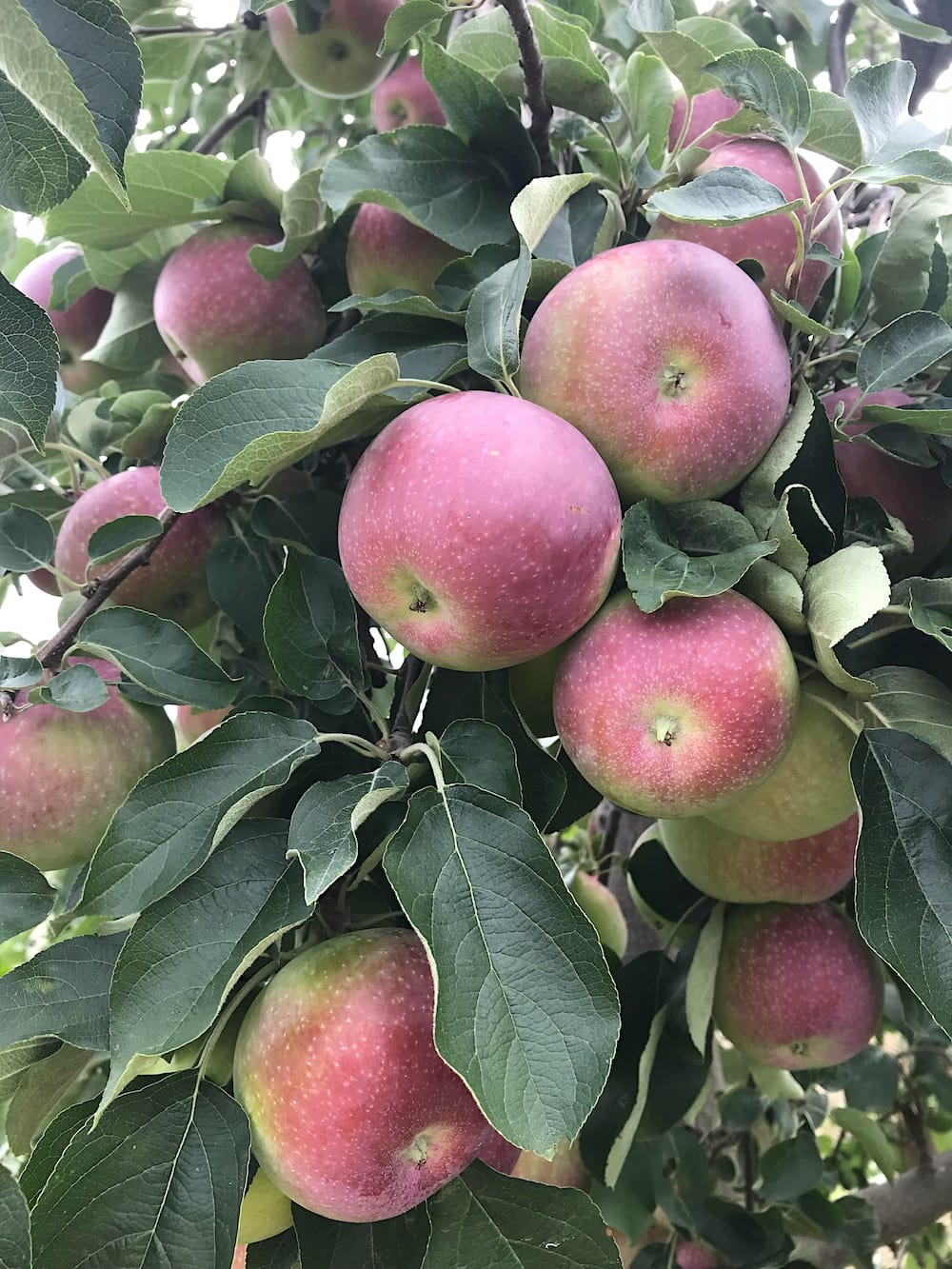 What is the Difference Between Apple Juice and Apple Cider?

Given there are quite a few different apple products to choose from, it’s worth taking a look at the differences. Here’s the scoop on what you need to know:

It can be a “varietal” made using only one signature variety of apple or be a blend of many varieties. You can find it refrigerated in the produce section of your grocery store.

Apple Juice: Apple juice is the juice of pressed apples that has undergone filtration to remove the pulp. It’s also been pasteurized to extend its shelf life.

Apple juice is a clear golden colour and lighter in texture than apple cider. It doesn’t need to be refrigerated so you can find it in the grocery aisle.

Hard Apple Cider: Hard apple cider is an alcoholic drink made from fermented apple juice. It usually has 4.5% – 7% alcohol by volume (ABV) and is a popular gluten-free substitute for beer.

It has a long history and even today cider continues to be served at sagardotegi (cider houses) around San Sebastian in the Basque region of Spain.

Apple Cider Vinegar:  Apple cider vinegar is made by fermenting apples into natural sugar alcohol and then adding bacteria to convert the alcohol into acetic acid. While this brown-coloured vinegar is wonderful in salad dressings or marinades and even taken medicinally, it’s too tart for a cocktail.

For this apple cocktail, I’ve opted to use raw apple juice rather than filtered juice. It creates a cloudy apple mojito with tons of pure apple flavour. With the addition of spiced rum it tastes just like apple pie in a glass!

What Kind of Spiced Rum is Best for an Apple Mojito Cocktail?

Once you’ve decided to go with a spiced rum (and I hope you have!), the big question is what kind of spiced rum is the best to use?  While the best known is likely Captain Morgan Original Spiced Gold, there are many types of spiced rum to choose from.

You can purchase artisanal, small-batch spiced rum or make your own at home by blending rum with a selection of spices you love.

For this recipe, I went with Chic Choc Spiced Rum, a Canadian small batch spiced rum,  because the boreal spices complemented local apples so well.

Produced by the Domaine Pinnacle orchard and distillery in the Eastern Townships of Quebec, Chic Choc Spiced Rum is actually named after the fabled Chic Choc Mountains northeast of Québec City where the boreal spices used in its production are harvested. The spices include:

This carefully-crafted, light mahogany rum is the world’s only artisanal rum created with a blend of Nordic spices grown in the Gaspé Peninsula. It boasts flavours of light sweetness, caramel and cinnamon spice with underlying hints of ginger, vanilla, pepper and dried fruits.

Sip it straight, splash it over ice or slip it into other fall season cocktails such as a Dark ‘n’ Stormy, Bourbon Hot Toddy or a Ponche de Frutas – Hot Holiday Rum Punch.

Another equally delicious option for an apple cider mojito is a Caribbean rum crafted of tropical spices. One of my favourite traditional drinks in Grenada is spiced rum. 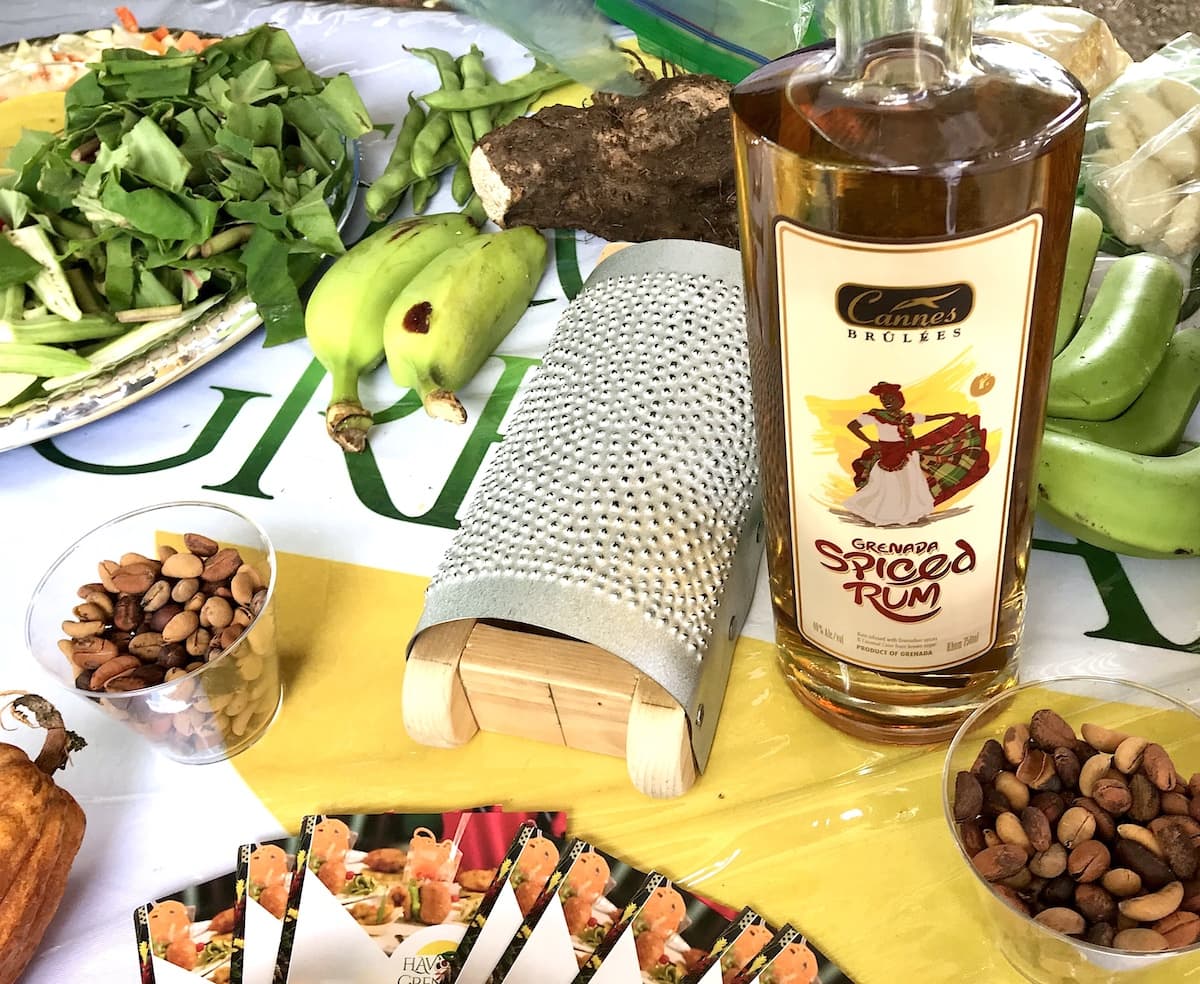 While it’s possible to purchase spiced rum in a bottle, a great thing to do in Grenada is to sample spiced rum at one of the local rum shops. Or make your own spiced rum by infusing rum with loose spices or a pre-made spice mix.

One of my favourite Grenadian rum spice mixes is Hinds Spice Rum. If you’re visiting Concord Waterfall in Grenada, it’s possible to purchase a bottle of the spice mix for a few dollars. It contains local ingredients including:

No matter which spiced rum you choose, it will infuse your apple mojito cocktail with its own unique characteristics. So get creative with your spiced rum choices! 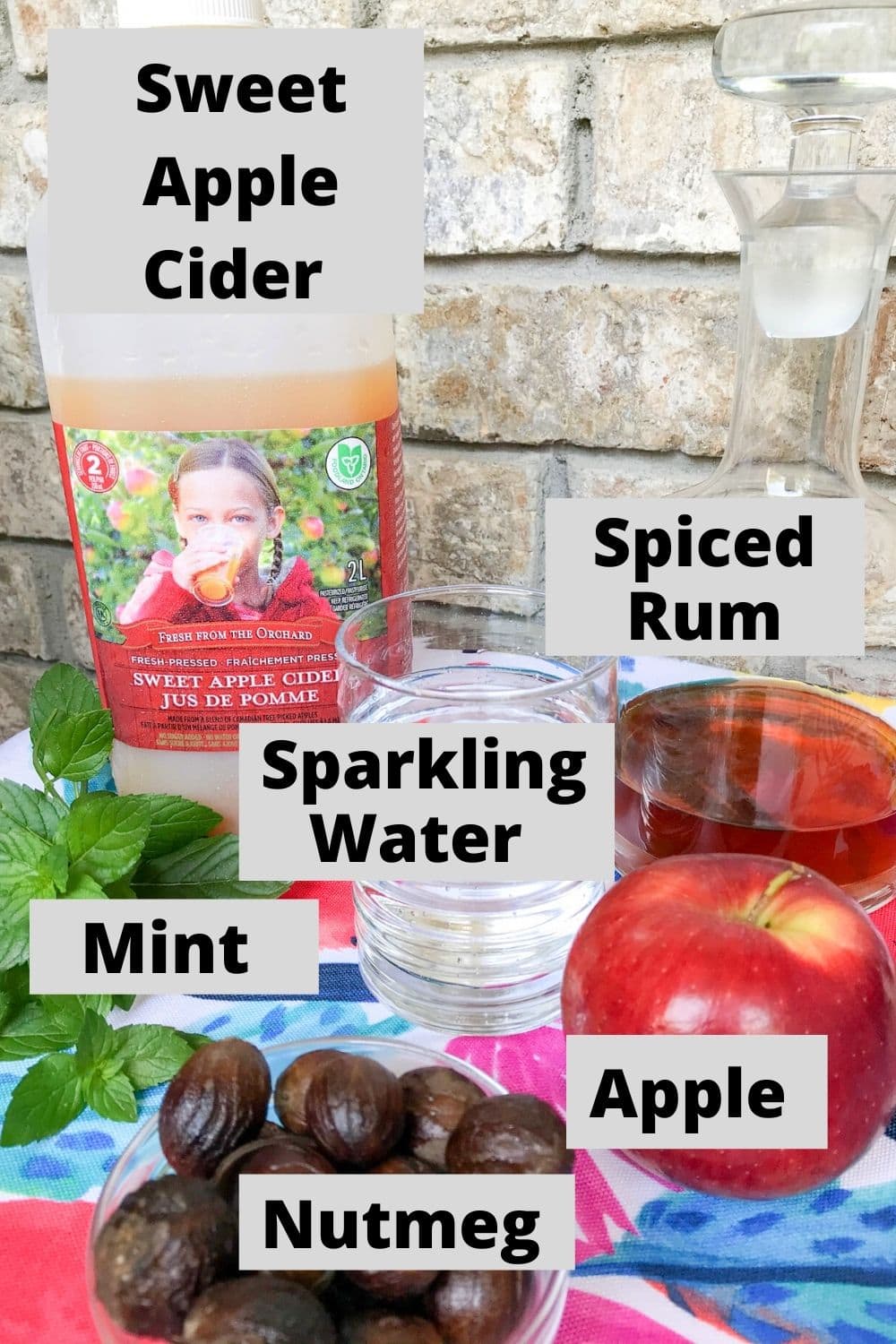 For the ultimate in carefree entertaining, there’s nothing complicated when it comes to ingredients! Scroll down to the recipe card for exact measurements but here’s what you’ll need.

Step by Step Instructions for an Apple Cider Mojito

1. Fill a glass of choice with ice. (To create a Cuban-style mojito fill the bottom of the glass with mint and muddle the leaves with a wooden spoon like a pestle to release  the aromatic mint flavour. Then add ice).
2. Slice half the apple into slices and place into the glass. Reserve the rest for the garnish.
3. Pour the spiced rum over the ice and apple slices. Shake the apple cider and pour it into the glass.
4. Top with sparkling water.
5. Garnish with sprigs of mint, a slice of apple and freshly-grated nutmeg.
6. Stir and serve immediately. 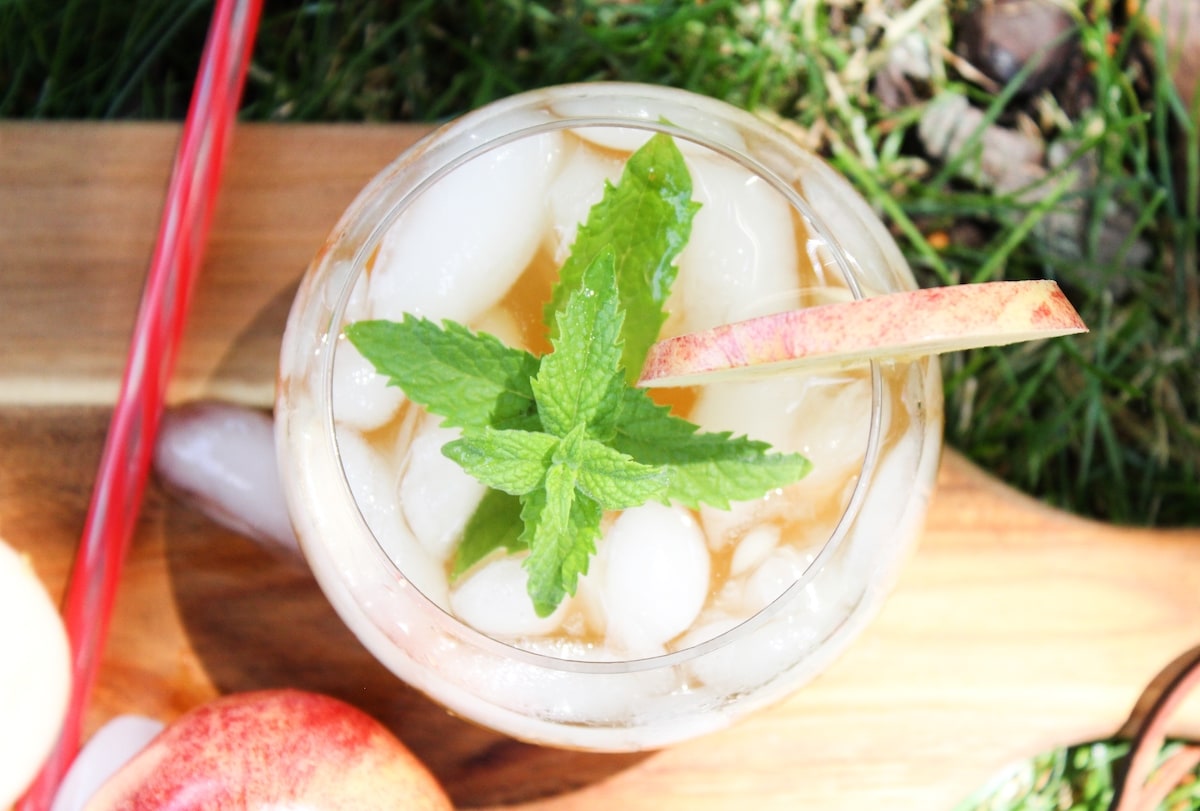 Other Refreshing Cocktails and Drinks to Enjoy 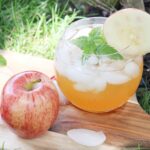 Note: Nutritional information is created by online calculators so figures are only estimates. 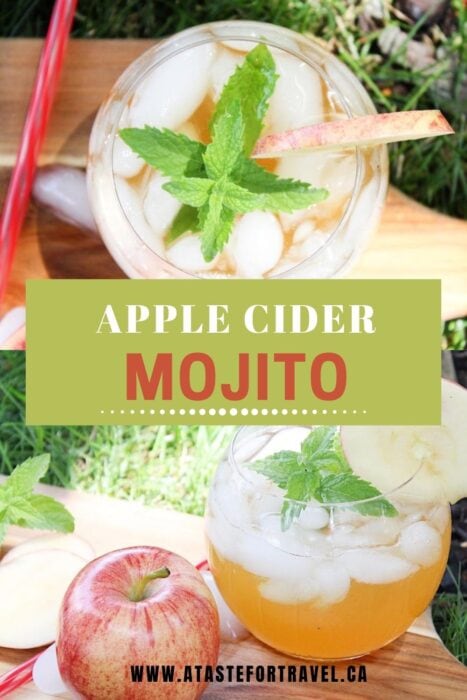