If you’re planning a trip to Guatemala, you don’t want to miss el Día del Diablo – the Day of the Devil. Not only is it one of the most important Christmas holiday traditions in Guatemala, it’s one of the world’s most exciting fire festivals.

Every year on December 7th, Guatemalans light bonfires and burn the devil in effigy.

While many celebrations take place on streets outside people’s homes, the most spectacular event is the Quema del Diablo or Burning of the Devil in the former capital of La Antigua. 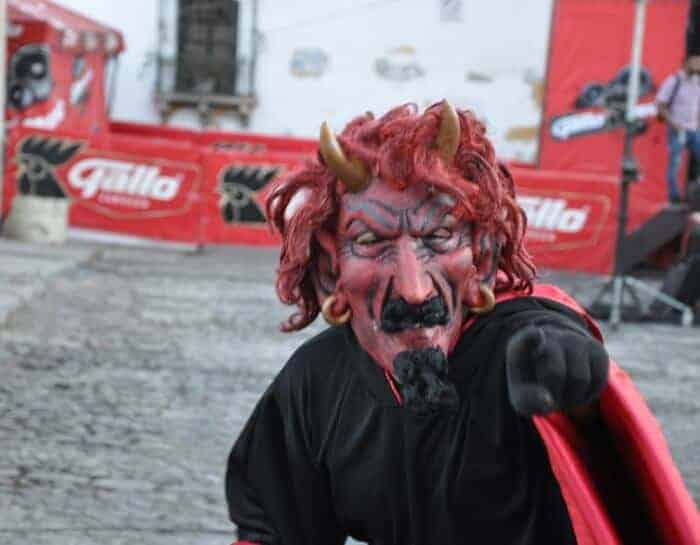 How do they celebrate Christmas in Guatemala? During this special Guatemalan tradition, people douse enormous effigies with gasoline and light them on fire in the streets in a ceremony called la quema del diablo (burning of the devil).

It’s well worth travelling to Guatemala to experience the Burning of the Devil festival in person!

History of Día del Diablo – Burning of the Devil in Guatemala

Like many other major celebrations and traditions in Guatemala, the Burning of the Devil is a Guatemalan custom deeply rooted in spiritual and pre-Hispanic beliefs.

The history of el dia del diablo  dates back to ancient times. The power of fire has long been recognized by early cultures who revered the element of fire for its ability to provide warmth, to provide sustenance through cooking as well as its ability to destroy.

Fire rituals  can be seen in virtually every culture and religion around the world — from Buddhist Fire ceremonies to First Nations smoke smudging traditions to the fireworks of Valencia –with the primary function of fire being one of purification, cleansing and transformation into the divine.

In Guatemala, the tradition of la quema del diablo or burning of the devil symbolizes the ritual cleansing and banishment of bad spirits to usher in the Christmas season.

It’s a process of purification leading up to a holy season filled with important religious dates and other Guatemala Christmas traditions.

These include the December 8th Feast Day honouring the Conception of the Virgin Mary, the nightly posadas (processions) that begin nine days before Christmas, Christmas Eve or Nochebuena, the Day of Kings and more.

When is the Día del Diablo in Guatemala?

While the Día del Diablo and the fire ceremonies, fireworks and festivities take place on December 7th, preparations begin several days in advance.

One of the places to go to fully understand this Guatemalan tradition is the village of Concepción. This picturesque Maya village is set in a fertile valley 20 minutes from Sololá, near Lake Atitlan and is dedicated to the Virgin Mary and her saint day of December 8th.

At the heart of Concepción is a sturdy Catholic church constructed in 1621. It’s one of Guatemala’s few churches to have survived centuries of earthquakes and features a wooden roof carved with angels, saints and apostles.

It’s also home to an active cofradía, a Maya brotherhood who are guardians of ancient religious practices. Many still wear their traditional embroidered clothing featuring a distinctive bat–a symbol for the last Kaqchikel dynasty–atop rainbow-hued trousers, a tunic wrap and sandals.

For the December 8th Feast Day honouring the Conception of the Virgin Mary, they lay wooden platforms through the center aisle of the church to serve as pagan altars for offerings of food, candles and other tribute.

They also install a ceremonial silver candelabra and carry the Virgin in procession through the village.

It’s incredible to see the diminutive stature of the Virgin festooned with money, lottery tickets and other adornment for her saint day. The locals also celebrate with fireworks, music and special dishes such as pulique, a chicken stew.

Tip: Learn how to prepare authentic Maya pulique in my post on Cooking Class in Guatemala: Ceremonial Chicken.

Where is the Burning of the Devil in Antigua Guatemala

In addition to being the heart of organized festivities for la Quema del Diablo in Guatemala, Antigua is also a great base for experiencing Semana Santa (Easter Holy Week) and Day of the Dead, other unique Guatemala celebrations.

Some of the other top things to do in Antigua include studying Spanish at one of the many Spanish language schools, climbing a volcano and visiting the coffee plantation dotted on the lush volcanic slopes nearby.

A good hotel for Day of the Devil is Hotel Cirilo, an art-filled boutique hotel in the quiet Candelaria neighborhood. Although not quite as luxe ( or as pricey) as Hotel Panza Verde (read my hotel reviews in 3 Budget Hotels You’ll Love in Antigua), Hotel Cirilo offers an elegant and quiet stay away from the festivities.

The sense of tranquility is accentuated by its setting within the bougainvillea-draped ruins of a 17th century chapel.

As the sun begins to set,  people make their way to Barrio de Concepcion, the centre of Quema del Diablo or Burning of the Devil festivities. 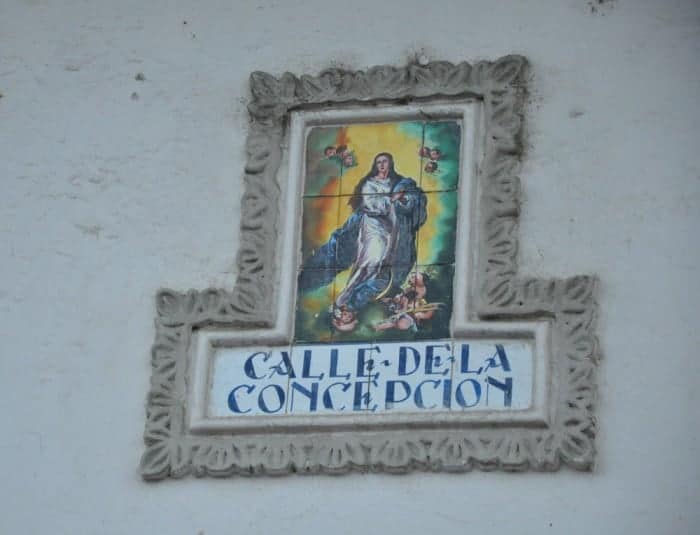 You know you’re in the right neighbourhood when you see this sign or you can just follow the crowds. It’s the opposite side of town from La Merced church.

Although other Guatemalan communities celebrate by burning tires in the streets, in the Concepcion neighborhood of Antigua, authorities are trying to keep festivities under control for safety reasons.

A papier-mâché effigy of the devil serves as a hub for a giant communal bonfire and a firetruck with firefighters were on standby.

Much like most other Guatemala celebrations, food is a highlight of the Quema del Diablo festival. Traditional food stands are packed with goodies including: Rubbing shoulders with locals, you can watch as the 10-foot tall devils, such as this one crafted by artist Pablo Godinez Pichiya, get soaked with an incendiary fuel.

Then, a costumed announcer will step forward and, to the sound of a full brass band, renounced a long list of transgressions committed by politicians, before a torch set the effigy of the devil on fire.

While the devil burns, flames and sparks will dance into the night sky. Between cameras flashing and shouts from the crowd it’s a bacchanalian celebration merging Guy Fawkes Day and Halloween.

The Burning of the Devil –  Quema del Diablo –  is an incredible way to usher in the Christmas season!

Travel Planner for Burning of the Devil in Guatemala

Tours of Guatemala: Culture Xplorers partners with local communities to offer a range of cultural tours as well as custom tours through Guatemala. Read more in my review of their tours in Luxury Latin America. My guide was Adolfo Cruz, a cultural expert and interpreter from Culture Xplorers.

Getting Around: I’ve always had a good experience with Adrenalina Tours. Read more about transportation to Guatemala in Night Bus to Guatemala.

Safety: It’s a wise idea to stay far away from the burning devil itself as sparks and glowing embers can travel if there’s any wind. Follow our Safety Tips for Travel in Guatemala  and if you need assistance, contact INGUAT, the Guatemalan Tourist Assistance office.

Is Guatemala Safe? 20 Safety Tips for Travel to Guatemala

Top Things to Do on Day of the Dead in Guatemala

Grand Prix: A Cheap Hotel near Mexico City Airport
Next Post: Tamales: the Soul of Navidad