With art galleries, fascinating architecture and incredible cuisine, there’s no shortage to things to experience in Mexico City’s Historic Centre.

But for something completely different, head 20 kilometres outside the downtown core to the floating gardens of Xochimilco Mexico City.

This network of canals dates back to the time of the Aztecs, when the ancient peoples produced food on chinampas, pockets of arable land floating on the shallow lakes beds of the Valley of Mexico.

It’s definitely worth visiting if you’re in Mexico City for three days or longer.

Today, you can glide through these canals in a trajinera, a brightly painted Mexican gondola, while enjoying food, drinks and entertainment along the way.

It’s one of the top things to do in Mexico City for visitors and a very popular activity for locals celebrating birthdays, engagements or family special occasions, so if you can go during the week when the crowds aren’t as large.

It’s also the kind of activity best enjoyed in a group or as a couple, so if you can gather a group of friends you’ll have more fun.

Book one of the boats and you’ll float through the peaceful canals learning about ancient traditions and enjoying food, drink and even mariachi music.

Prices are posted at the Embarcadero (dock). If you’re taking a guided tour to Xochimilco, your ticket includes the cost of the boat rental.

One of the strangest sights I saw along the way was a display of dismembered dolls affixed to trees. It was an eerie, rather creepy sight. It also happens to be a top spot during Day of the Dead when performances of the legend of la llorona  take place in the neighbourhood.

La Llorona ( The Weeping Woman) is a woman who killed her children to be with her lover and after he deserted her, she roams the streets –from Guatemala to Mexico– lamenting the loss of her children for eternity.

But the Island of the Dolls or Isla de las Munecas was actually created by a local who found the body of a young girl floating in the canal.

Unable to save her from drowning, he collected dolls and attached them to trees on an island as a form of memorial.

Legend has it that her spirit now lives through the dolls and witnesses have reported seeing dolls’ limbs move, eyes open and other strange happenings.

I wasn’t keen to find out for myself so focused on sipping tequila and eating grilled corn that miraculously appeared from floating vendors.

Things to Do Near Xochimilco Mexico City

Xochimilco also happens to be located near the fascinating Olmedo Patino Museum, a historic hacienda that’s home to an important collection of art by Diego Rivera and Frida Kahlo plus vast botanical gardens and  folk art.

If you’re looking for high quality souvenirs, the gift shop is one of Mexico City’s best. Dog lovers will enjoy learning about the museum foundation’s efforts to bring back the ancient Mexican dog breed, the Xoloitzcuintle or Xolo, a hairless canine  once considered a holy animal by the Aztecs.

Check out this handy itinerary for 3 Days in Mexico City

Getting to Xochimilco Mexico City:

If you don’t speak Spanish and/or want to maximize your sightseeing time, I recommend you take a guided tour to Xochimilco. Many guided tours also include stops at other Mexico City attractions such as the Frida Kahlo museum and the district of Coyoacan, known for its colonial architecture, boutiques and cobblestone streets.

If you’re doing it independently, expect it to take 90 minutes by public transit. First, take Metro Line 2 to station Taxqueña. From there exit and take Tren Ligero (light rail) and pay an extra fare. Ride the light rail to station Xochimilco, the very last station.

Then, walk or take a bicycle taxi through the market and village to the canals. Or, if you’re in a group it can be cheaper and more convenient to take a taxi, Uber or Didi from your hotel even if you’re in Roma Norte or outside the Historic Centre.

If you’re travelling to Xochimilco independently, be sure to go to the central embarkation point NOT the small launching point. Beware of motorcycle scammers who will tell you the boats are closed, full or busy and try to steer you to the wrong embarkation dock.

Tours at Xochimilco Mexico City: Boat rental prices are fixed (posted on a billboard at the dock) depending on the size of the boat, but you can try to negotiate for more time.

Vendors and roving mariachis float up to your boat to serenade you, offer drinks and tasty grilled corn with chile, lime and mayo for an extra fee.

There’s so much to explore in Mexico City, it’s easy to become overwhelmed by choices. Check out this guide to  Mexico City for three days or longer for more ideas.

What’s also great about this, is that once you’ve downloaded the app it will work offline without internet connection. This means you don’t need to purchase mobile data plans or worry about paying roaming charges while in Mexico. 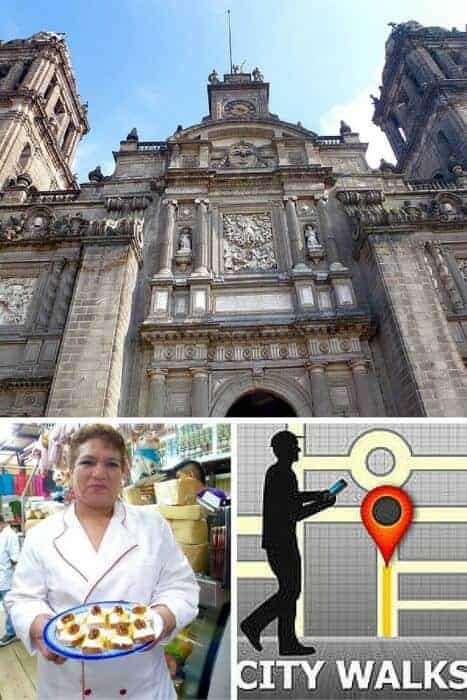 If you’re travelling with a family and looking for more ideas of things to do in Mexico City check out this post Mexico City: The Most Overlooked City

Related: If you’re headed to Cancun Riviera Maya, consider staying at Hotel Xcaret Arte  (or its family-friendly counterpart Hotel Xcaret) and you’ll get all-inclusive access to Xcaret’s theme park experiences such as the  floating gardens of Xoximilco, modelled on the original gondolas and canals in Mexico City.

Complete Guide to a Day Pass to Sandals Grande Antigua
Next Post: 12 Ways to Protect Yourself from Dengue, Zika or Chikungunya Virus